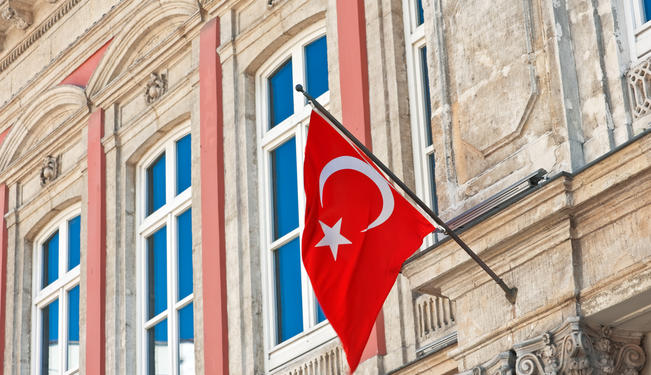 Under the influence of current Foreign Minister Ahmet Davutoglu, who previously served as an AKP advisor for many years, Turkey began to pursue numerous policies aimed at fostering “economic interdependence” between itself and its neighbors, thereby incentivizing all parties to maintain cordial relations.

In 1991, only ten percent of Turkey’s foreign trade was with regional partners, while 50 percent was with European nations. By 2011, regional trade had more than doubled to 22 percent, while trade with Europe declined to 41 percent. Moreover, Turkish direct investment in neighboring countries soared from $900 million in 2001 to more than $6 billion in 2011.

Turkey pursued this new strategy vigorously with respect to Syria: Over the next decade, Turkey would go on to sign 51 protocols for increased economic cooperation, lift visa requirements for civilian travel between the two countries, and push for the establishment of a Levantine free trade zone to open new markets for Turkish goods.

By 2011, “commercial and political relations were booming, the number of nationals traveling in both directions had reached unprecedented levels, and leaders of both countries spent vacation time together.” According to Turkish officials: “The main rationale behind these initiatives is to ensure realignment of the region toward economic cooperation and away from the politics of confrontation.”

Thus, Turkey’s rapprochement with Syria is in large part attributable to a reformulation of its foreign policy, with a focus on the development of economic integration with its neighbors.

This then begs the question: What motivated Turkey’s decision to support the Syrian opposition over its longtime ally, Bashar al-Assad, given its demonstrable success in pursuing greater economic and political cooperation? Does such a decision represent a “re-securitization” of the country’s relationship with Syria?

Mubarak had been a cooperative agent for several years in Turkey’s regional integration strategy. Egypt inked a free trade agreement with Turkey in 2005, which saw trade volume rise from less than $1 billion that year to more than $3 billion in 2010, with Turkish investments in Egypt rising to $1.5 billion from a negligible $60 million in the same period.

Nevertheless, Erdogan urged Mubarak to “hear the cry of the people and… meet [their] desire for change without hesitation. No government can stand against the people.”

If the Erdogan government’s concern for the will of the people seemed hollow then, its brutal repression of Turkey’s own popular protest movement this summer fully revealed its true character.

Certain observers pointed to a much more likely motive for Turkey’s position on Mubarak: unrest in Egypt might have rippled further into the region, potentially disrupting the oil flows and foreign investments on which the Turkish economy depended. Given Turkey’s growing but still relatively minor financial interests in Egypt, it likely reasoned that it had little to lose in antagonizing Mubarak even if he stayed, but the threat of protracted unrest was a much greater risk that it should attempt to forestall.

Another key example is Turkey’s relationship with Muammar Qaddafi which was, however, more complicated. Turkish financial interests in Libya were considerably greater than those in Egypt. According to the Doha Institute, Libya had invested tens of billions of dollars into Turkish construction enterprises operating in the country, with billions more promised in the coming years. Indeed, according to the Turkish Ministry of Foreign Affairs, Libya was Turkey’s second largest market for construction projects abroad after Russia.

More than 160 Turkish investment projects in Libya were underway on the eve of the uprising, and nearly 25,000 Turkish workers were in the country manning the projects. Given the scale of Turkey’s financial interests in Libya, it vacillated for months between criticizing the late Libyan leader and insulating him from international condemnation — finally calling for his ouster only once the NATO bombardment began and when it became clear that Qaddafi's time was limited.

Ultimately, the Arab Spring in Libya was disastrous for Turkish business interests. Thousands of Turkish workers were forced to flee the violence, which shut down numerous construction projects and disrupted payments of more than $15 billion to Turkish investors, which as of February 2013 were still unpaid.

Given Turkey’s close economic and political cooperation with Syria, it held out even longer than in Libya in avoiding a clear call for Assad to step down, with Davutoglu personally meeting the Syrian president as late as August 2011. But in light of Turkey’s substantial losses in Libya due to violent conflict and the decreasing likelihood that it would be able to maintain a profitable relationship with the Syrian regime in the future, Erdogan finally called for Assad’s resignation in November 2011.

Of course, Turkey could not have anticipated the resilience of the Syrian regime and the extent to which that decision would come with its own set of economic setbacks. Syria unilaterally suspended its free-trade agreement with Turkey in December 2011 as a result of Turkey’s support for the rebels. And as violence in the country grew when Assad refused to step down and began to clamp down militarily on the rebellion, trade dropped precipitously before grinding to a halt in mid-2012.

A Threat to Economic Cooperation?

The persistence of the Assad regime now presents multiple threats to Turkey’s goal of greater economic alignment with the Middle East, foremost because the Assad government is no longer willing to function as a partner to Turkey as it had over the past decade.

Moreover, continued economic engagement with the regime has become undesirable following the violence in Syria, which has poisoned the government’s reputation and those of its supporters. Finally, the Syrian conflict has not only crippled the country’s trade with Turkey, but has interfered with Turkish trade in the Gulf, as violence has disrupted the transport of Turkish goods through Syria.

Overall, the Syrian government has emerged not only as a threat to Turkish-Syrian economic cooperation, but to continued Turkish economic integration in the Middle East — a lynchpin the neoliberal program the AKP government has vigorously pursued for more than a decade.

Turkey’s reconfigured relations with Syria are not a product of a regressive security policy vis-à-vis Syria itself, but a function of much broader political and economic program encompassing the entire region. As such, it is not appropriate as yet to refer to a “re-securitization” of the Turkish-Syrian dynamic, as Turkey’s support for the Syrian opposition is grounded in a fundamentally different set of incentives and fears than those that predominated in the 1990s.