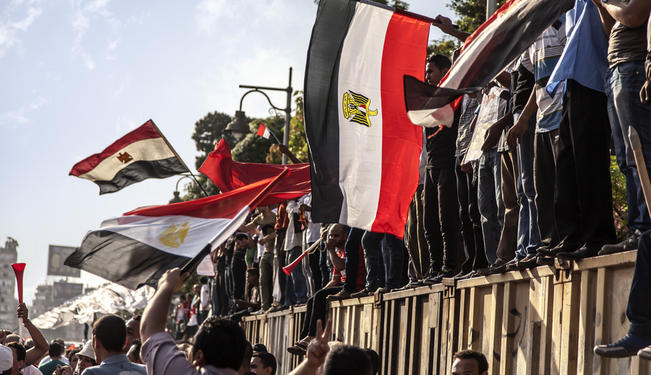 History suggests that Egypt’s troubles are about to get a whole lot worse.

On July 3, Egypt’s military overthrew the government of President Mohammed Morsi. Having warned of its intention to intervene, the Egyptian armed forces seized control of state media, sealed the borders, placed Morsi under house arrest, and issued arrest warrants for over 300 members of the Muslim Brotherhood, the political force behind the Freedom and Justice Party who led the ruling coalition. This was followed on July 8 by members of the army killing over 50 people who were protesting the ouster of President Morsi.

According to the Cambridge English Dictionary, the term coup d'état is defined as follows: “A sudden illegal, often violent, taking of government power, especially by part of an army.” Yet curiously, the governments of the liberal Western democracies, usually so quick to condemn such actions, have failed to even acknowledge these events as a coup d'état.

Neither the UK nor the US government has described the events in Egypt as a coup d'état. The French foreign minister, Laurent Fabius, merely confirmed the Egyptian military’s actions in a statement that gave the impression that the Morsi government had never even existed: “In a situation that has worsened seriously and with extreme tension in Egypt, new elections have finally been announced, after a transition period.”

Even the EU foreign policy chief, Catherine Ashton, a normally cautious observer, remarked: “I urge all sides to rapidly return to the democratic process, including the holding of free and fair presidential and parliamentary elections.” This statement implies that "all sides" had departed from the democratic process, rather than that the military-judicial establishment carried out a coup against a democratically elected government.

Not only did the Egyptian coup take place with the barely disguised support of the US government and its Western allies, but it also achieved something quite remarkable in the contemporary diplomacy of the Middle East: it produced a united response from both the Bashar al-Assad regime in Syria and the regimes of Saudi Arabia, the UAE, and Qatar, all of whom congratulated the Egyptian people on their achievement.

To understand why a military coup — usually such a destabilising and threatening event — could occur without even being acknowledged as such, it may be helpful to analyse the Egyptian coup with relation to the Turkish experience of military-civilian relations.

Of all the unrest that has occurred in the Middle East since Mohammed Bouazizi’s self-immolation in December 2010, two particular episodes stand out from the rest and draw comparison. They are the protests of the Tamarod (Rebel) movement in Egypt that led to the military coup of July 3, and the protests in Turkish cities a month earlier.

What sets these two events apart is that the focus of the anger was a democratically elected, moderately Islamist government, rather than an autocratic regime. In both cases, protests were dominated by an urban, Westernised, secular population that has traditionally controlled key aspects of state building, specifically the military, judiciary, media, and bureaucracy.

In Egypt, the protests have been led by members of the Tamarod movement, which has support from Kefaya, the National Salvation Front, and the April 6 Youth Movement. It is predominantly young, urban, secular, and comparatively Westernised. According to a poll carried out by Zogby Research Services, the organised opposition to the Morsi government is majority anti-political Islam, with 67% seeing Morsi’s election victory as a setback for Egypt. This opposition is concentrated in urban and tourist centres.

Likewise, in Turkey, the protests were led by a young, urban, Westernised population that termed themselves “libertarian” in a survey conducted by academics at Istanbul’s Bilgi University. A total of 64.5% of respondents defined themselves as “secular”, 63.6% were aged between 19-30, and the protests were confined to major urban centres.

A fundamental — if initially surprising — element of the Egyptian coup has been the active support of the protest movement for military intervention. Considering the role that the military has played in establishing and maintaining successive dictatorships in Egypt for over half a century, this may seem a strange desire for an apparently liberal protest movement.

However, the desire of an urban, Westernised, secular elite for the military to protect their vision of the state leads to a situation, whereby military coups are not only accepted and welcomed, but are not even acknowledged as having occurred. The process becomes so embedded as to be submerged under layers of linguistic and intellectual denial.

In such a case, it can be claimed as leading Egyptian author Ahdaf Soueif did on BBC Radio 4’s The World at One programme, that, “this is not a coup.” Such a surreal situation bears comparison with the events of 1997 in Turkey, in which a military coup took place that became known as the "postmodern coup" or the "coup by memorandum".

It was termed "postmodern" for the fact that, in many ways, it appeared not to happen at all. There was no recourse by the military to outright coercion. Instead, a group of generals submitted their complaints to the government by way of a memorandum, which Necmettin Erbakan, Turkey first Islamist prime minister, was forced to sign. Following the issuing of the memorandum, which included anti-Islamic measures such as the banning of headscarves in universities, Erbakan was forced to step down and his political party was banned.

This was the last of a series of four coups spanning less than 40 years. The preceding three — in 1960, 1971, and 1980 — were all more traditional affairs in which the military took control by force and became the active rulers of the state without the façade of civilian political representation.

Although the Turkish protesters of June 2013 would be loath to admit it, military intervention was absent in Turkey largely due to the efforts of the ruling Justice and Development Party (AKP) and its leader, Recep Tayyip Erdogan. With its roots in political Islam, the AKP party was only the latest in a long line of Islamist parties in Turkey, all others having been banned by the military-judicial establishment.

The AKP administrations of the 21st century have done much to neutralise the political influence of the military, so long the ultimate arbiter of power in the Turkish state. While this may be seen as enlightened self-interest, for the military was the greatest threat to AKP rule, it also meant that society at large was freed from the oversight of the military.

With key mechanisms of the state system in Turkey placed in civilian rather than military hands, it meant that military intervention became far less achievable. But that was not the only change. The other was public opinion. Although the urban, Westernised, secular population of Turkey may be wary of Islamist politics, it has learnt that such politics is better accommodated within a truly democratic system, rather than excluded by force.

As a result, in the survey of the protesters of Taksim Square, conducted by academics at Istanbul’s Bilgi University, it was found that while 92.1% did not vote for the AKP, only 6% of those polled said they would support a military takeover. This is real progress in a country where the same constituency would have reacted in a far more Egyptian way only a decade or so earlier.

The denial that a coup has taken place in Egypt is worrying, not only for Islamists, but for democrats everywhere. It reveals an urban, Westernised, secular population that will choose military rule over democratic rule by Islamists. International reaction suggests that this constituency in the Middle East can expect to keep the support of Western governments.

It recalls the military coup in Algeria in 1992 to terminate the electoral victory of the Islamic Salvation Front, which led to years of civil war between a Western-backed army and Islamist militants. More recently, the far from condemnatory response of Western powers to the Egyptian coup also echoes the refusal of Western governments to accept the democratic victory of Hamas at the polls in Palestine in 2006.

For the democratically elected En-Nahda Party and their opponents in Tunisia — the birthplace of the Arab Uprisings — it now sends a very troubling message. It suggests that military assistance to the secular elite in barring Islamists from power is acceptable. It suggests that it can be linguistically and intellectually woven into the democratic narrative of the West as a vital, if painful, part of the revolution. It tells Islamists that democracy is not for them.

The actions of the Egyptian military and its supporters on the streets dangerously undermine the largest and most moderate expression of political Islam in Egypt: the Muslim Brotherhood. It will not only radicalise Brotherhood supporters and bolster party hardliners, it also appears likely to remove the Salafist Nour Party from mainstream politics as well.

Ultimately, if democracy cannot be extended to all sectors of society, then it is no democracy. No wonder the autocrats of the Middle East were so quick to congratulate the Egyptian people on their victory.