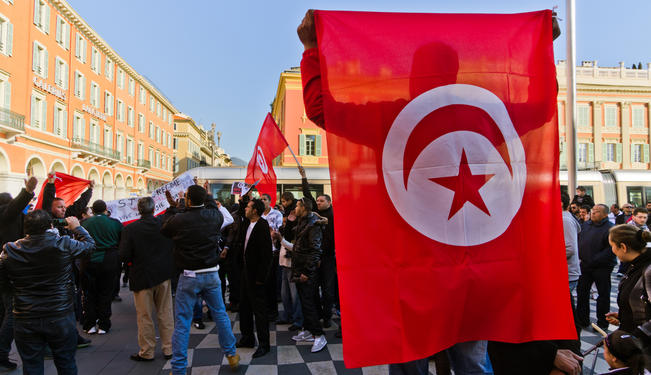 Tunisia’s roadmap out of the crisis carries significant risks.

More than two years after President Zine El-Abidine Ben Ali's ouster, political and social events, including prolonged anti-government protests, have led to a national dialogue among key stakeholders to resolve Tunisia’s current crisis. This dialogue is seen as the panacea to unlock the process of democratic transition.

What is perceived as needed by Tunisia's main political actors is a national consensus, which is usually considered when a country is really threatened by collapse, complete political deadlock, or civil war. Therefore, the consensus among politicians becomes necessary when no one is seen as legitimate enough to run the country.

The national dialogue started two weeks ago, but was suspended on November 5. Through civil society partners, political stakeholders stated their intention to return to dialogue during the week of November 18; it is based on a roadmap proposed by a Quartet.

Intended to remove the current government in three weeks, this roadmap is not based on a national consultation which the people should be the main actor of. The quartet, which is playing the role of mediator between the elected Troika in power (Ennahda, Congress for the Republic, and Ettakatol) and the opposition parties, consists of:

Opposition parties – mainly the Popular Front, the Republican Party, Al Massar, and in general the parties that are part of the National Rescue Front –  have used the assassination of Chokri Belaid, leader of the Popular Front, to question the legitimacy of the Tunisian government. They are directly and indirectly supported by certain groups – for example, the L’Initiative pour la Recherche de la Vérité sur l’Assassinat de Chokri Belaïd (IRVA) – media outlets, and foreign personalities like Jean-Pierre Mignard.

The opposition, taking advantage of the weakness of the country and the fragility of state institutions after the revolution, has blamed the government for slow progress with implementing government programs and transitional justice procedures. Despite its poor electoral performance, the opposition is starting to hope to overthrow the current government regardless of the consequences on the transitional process.

Paradoxically, the questioning of the Tunisian government’s legitimacy was accompanied by suggesting non-democratic alternatives — namely the appointment of a new, competent and politically-neutral government, without directly consulting the public. In addition, most opposition parties who have succeeded in bringing about this political change did not, in any way, prove their ability to manage the country. They actually seem unable to attain power by democratic means.

While the election in 2011 showed their low popularity, opposition parties were able to shape public opinion by claiming the political balance had changed at the expense of the Troika. This was in part achieved by a concerted media strategy, aimed at demonizing the government. In contrast to that, the Tunisian government’s communication strategy was too timid.

To better understand the current situation, it is important to examine the meaning of the following headings — phrases that have been promoted by the opposition for over two years.

A Country on the Wrong Path

Stopping the constitutional process in its final stages would be a great loss for all Tunisians, since this was a popular demand during the protests of Kasbah 1 and Kasbah 2 that led to the resignation of Mohammed Ghannouchi, the former prime minister of Ben Ali. The natural alternative to this constitutional process would be a return to the situation of January 14, 2011, where there was almost no state.

Those who wish to take a step back are not aware of the risks associated with the resignation of the Troika. The Troika leaders have been allied against Ben Ali since October 18, 2009. Indeed, it is possible they are not properly navigating the constitutional process.

However, the risk of a constitutional vacuum, chaos, and the return of opportunistic actors by occupying their previous positions held under Ben Ali would be fatal. The real problem, however, does not lie with individuals but with a culture of corruption, non-compliance with state institutions, and bad governance.

Failure of the Government

It is very difficult to demonstrate the concept of failure. In fact, it means the non-achievement of the objective initially set.

Such an assessment should be done by an impartial third party. However, the failure of Tunisia's government was only assessed by the political opposition. The Tunisian people were once again not consulted.

It is important to note in this context that there is a lack of credibility when it comes to the political class as a whole. Moreover, the opposition which has not offered sufficient and alternative economic and social programs appealing to citizens, has experienced increasing difficulty to mobilize the street for its purposes. An example of that is the Bardo sit-in, calling for the dissolution of the National Constituent Assembly and the government, which no longer attracts the same amount of protesters and media coverage.

A transition is often characterized by weak and fragile state institutions, poor economic conditions, and the desire to implement ambitious reforms. However, a government during the transition is only expected to lead the country out of high-risk situations.

This objective was partially realized in spite of unfavorable conditions at home and abroad — Tunisia experienced high rates of unemployment, the dire economic situation in Europe affected the export market, and international rating agencies downgraded the country’s credit score. In fact, rates of growth and employment would be higher if unjustified strikes paralyzing vital activities had not occurred.

The Loss Of Legitimacy

Legitimacy is a concept used differently in Tunisia in varying circumstances; it changes when the political interests and power relations change. Recall that Mohammed Ghannouchi — referring to the silent majority and based on the legitimacy of a consensus to consolidate his power — managed the country after Ben Ali’s ouster by a team that Tunisians did not know. However, this was to counter the street legitimacy claimed by the opposition who organized the Kasbah 1 and 2 sit-ins.

The current weakness of the state, and probably international pressure, prompted the present government to follow the opposition’s stance and declare the national dialogue with the legitimacy of consensus to organize its departure.

The Risk of Election Fraud

The Troika’s appointment of many executives in the public sector was regarded by the opposition as a strategy to occupy key positions in the state to falsify future elections results. This argument is stronger in a context of mistrust.

However, this is an exaggeration since it is not the government that will organize the elections. The opposition could impose guarantees, such as the presence of international organizations, strengthening the legal and operational status of the independent electoral commission — Instance Supérieure Indépendante des Elections (ISIE) — and the replacement of regional governors by military officers during elections. Demanding the departure of the government does not have particular meaning in relation to this argument.

For these apparent reasons the opposition, supported by the UGTT, the UTICA, and several media outlets, has demanded to shorten the transition process currently led by the Troika. It seems the opposition did not, and still does not, care about the fact that the current process could be a decisive turning point in its own political history.

The Trapped Government and Opposition

It becomes obvious that the two protagonists are trapped.

The government is torn between making an exit through the "back door" by declaring bankruptcy on the one hand, and withstanding the pressure of the opposition on the other. But it may not be able to handle another possible political assassination.

The opposition, meanwhile, is torn between the acceptance of traditional democratic rules and the risk of being beaten again on the one hand, and to continue its pressure campaign, with no guarantee of achieving its goals on the other. Accordingly, it agreed to ally with the very men who served Ben Ali to avoid the continuity of the constitutional process.

During the dialogue, the opposition has suggested names — including Mohamed Naceur, Kamel Nabli, and other former ministers before and just after the revolution of January 14 — because of their considered competency, further showcasing the government’s supposed incompetence.

However, competence is measured by the results and circumstances. These former ministers of Ben Ali and others should not return to power without the consent of the population. In fact, the result of their economic and social strategies was a structural weakness, currently expressed in the social and regional disparities affecting Tunisia today.

If they are looking for economic competence, there is no reason to go to political parties. Even in this case, if the new caretaker cabinet only rules the country for a short period, what could justify the requirement of particular skills? How can these candidates for the to-be-formed-government agree to be evaluated and then be recruited by political parties, and therefore, lose their independence and neutrality?

For its part, the political class must realize that the roadmap proposed by the Quartet carries significant risks which could lead other forces, such as alliances of political parties with security forces and the military, to intervene and end the national agreement on the transitional phase.

In the short-run, the new cabinet will manage the state budget which has already been prepared by the Troika. The same issue concerns the Investment Code, the high investment authority, and the PPP project amongst others — unless the intention to actually run the country for the long-term remains hidden from the observer.

Finally, as with Poland’s transition in and after the Soviet period demonstrated, ensuring a smooth democratic transition is the responsibility of the intellectual, political, and economic elite. This is usually characterized by frictions, but should not run the risk of a reversal. Only democratic tools should be adopted to avoid this risk; a crucial lesson for Tunisia.