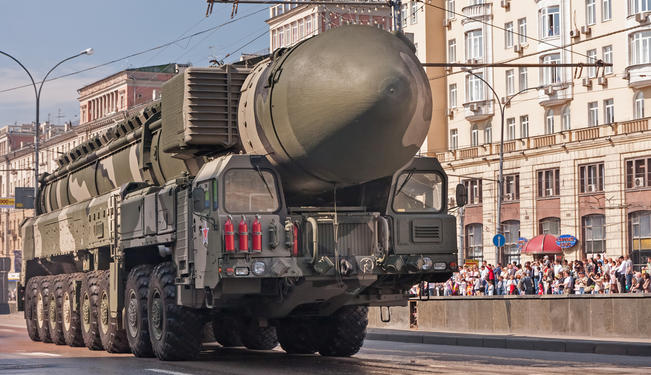 The Middle East needs a WMD-Free Zone as an alternative to military action and radicalism.

Is American-led military action the only way to deal with the presence and use of chemical weapons in Syria? Why not try to negotiate, together with all the relevant parties, including the Russians and Iranians, a post-civil war Syria, without chemical weapons? And why not begin negotiations to establish a Weapons of Mass Destruction-Free Zone in the Middle East?

We will soon be marking the 40th anniversary of the Yom Kippur War, which began on October 5, 1973, with a surprise attack by Syria and Egypt against the Israeli forces on the Golan Heights and in Sinai. I happen to be an Israeli, who unlike the Americans in the Congress and Senate that will soon be voting on the next steps in the current drama, actually faced the Syrians on the Golan Heights in 1973-74, for eight months, in the Combat Engineering Corps of the Israeli Defense Forces (IDF). Like Secretary of State John Kerry and Secretary of Defense Chuck Hagel, I know the horrors of war.

One of my primary conclusions from that experience was the importance of doing everything possible to resolve the Israeli-Arab conflict, and to seek a peaceful and non-violent long-term resolution to conflict situations in general. That does not equal pacifism, because there clearly are situations where there is no alternative but to use military force in self-defense, and to keep and maintain the peace.

When it comes to Syria, there are the zoom-in and the zoom-out approaches.

The Zoom-In Approach: Action, No Matter What the Consequences

The zoom-in approach focuses on one detail: chemical weapons were used in Syria. This is a violation of universal norms and of President Barack Obama's red-line. Action is required — whatever the complicated consequences.

The Zoom-Out Approach: Focusing on the Bigger Picture

The zoom-out approach focuses on the bigger picture. There is a civil war in Syria and over 100,000 combatants and civilians have been killed. Chemical weapons were used, apparently by President Bashar al-Assad's forces, though there are claims that it was a provocation by the rebels. There is a need to prevent the use of chemical weapons and to arrive at a stable post-civil war situation in Syria, which will guarantee the safety of all three major communities: the Alawites, Sunnis and the Kurds — as well as the Druze and Christians.

The quest for a post-civil war Syria will probably require American-Russian, and perhaps American-Iranian cooperation, and the involvement of the United Nations and the Arab League. That solution will be achieved by diplomatic, not military, means; although a peace-keeping force may be required in the transition period. The American readiness to explore the Russian proposal to place Syria’s chemical weapons under international control is a possible first step in that direction.

Another part of the picture is the crisis around the Iranian nuclear program. With the election of President Hassan Rouhani, an apparent Iranian readiness for diplomatic discourse with the West, and first and foremost the United States, should be explored. Such an exploration could help to resolve the conflict around the Iranian nuclear program, and it could also contribute to the creation of a stable post-civil war Syria.

There is also the renewal of Israeli-Palestinian negotiations, thanks to the determination of Secretary of State Kerry. Progress on this track, which is dependent on the readiness of the Israeli and Palestinian leaders, and continued American determination to be an effective facilitator, could be a major building block towards resolving the general tensions in the Middle East. It would also eliminate the Israeli occupation as a mobilizing factor for radical and extremist forces in the region.

WMD-Free Zone in the Middle East

All of the above requires the creation of a new regional regime for security and cooperation, as was done in post-World War II Europe. One of the foundations of this new regime would be the creation of a WMD-Free Zone in the Middle East. This would mean no chemical weapons in Syria; no nuclear weapons in Iran or any other country in the region; and a treaty with ironclad guarantees and the means for monitoring and maintaining the treaty.

This is not just a theoretical idea. The NPT (Nuclear Non-Proliferation Treaty) Review Conference, meeting in New York in April/May 2010, resolved that an international conference should be convened, to begin the process of moving towards a WMD-Free Zone in the region, under the auspices of the US, the UK, Russia, and the UN Secretary General. Although the conference was not convened in 2012 as originally planned, it is still on the international agenda, and must be convened before the next NPT Review Conference in 2015 to save the current international non-proliferation regime.

There is no doubt that if the American government wills it, and does what is necessary to promote it, a regional conference on a WMD-Free Zone in the Middle East can and will be convened.

*[An earlier version of this article was published in The Times of Israel under the title "Syria – The Bigger Picture."]