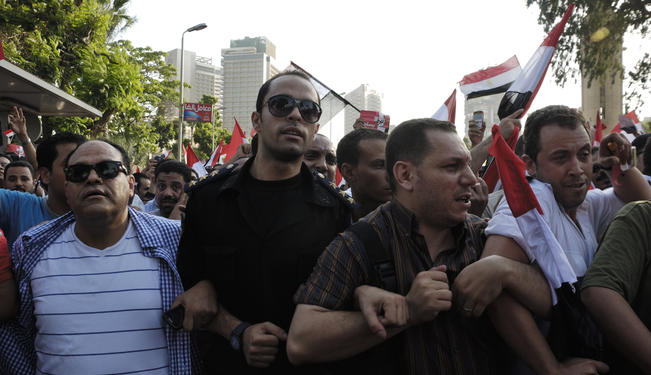 Call it a coup or not, but Egypt now has Mubarakism without Mubarak. This is the last of a three part series. Read part one here.

The leftists are claiming that their support for the coup and their alliance with the Mubarakist comprador bourgeoisie are actually anti-imperialist in nature, and are rallying against the Western media for its current “Orientalist” coverage of their coup (as if the western media has ever been anything but Orientalist in its coverage of our part of the world at all times), which they deem hostile, and for Barack Obama’s possibly having to cut off military aid in keeping with US laws that prevent him from extending aid to coup leaders in the Third World (Carter and Reagan found a way around this in the 1970s and 1980s, when they subcontracted Israel to aid America’s anti-democracy allies in Central and South America and in Apartheid South Africa, and Obama will find a way too). At any rate, US military aid to Egypt for 2013 was already disbursed and the 2014 aid is not scheduled for a Congressional vote until the fall. Not to worry though, top Israeli diplomats are lobbying the White House and the US Defense Department to continue military aid to Egypt.

Another legitimate argument that the liberals and leftists offer is that when they and others staged an uprising in January and February 2011, that led to the removal of Mubarak and the take-over by the army who ruled the country directly afterwards, few referred to what happened as a “coup” but called it a “revolution,” whereas now that there was another massive uprising and the army also intervened but without designating themselves as rulers, many are claiming this as a “coup.” This, of course, is correct though not accurate, as it sidesteps the central issue. In February 2011, the army refused to obey the orders of an unelected dictator by not shooting at civilians, thus helping to topple him, while in July 2013, they overthrew a president that more than half the Egyptian electorate voted for in democratic elections.

The coup-supporting liberals and leftists are mad at the Americans and crying imperialism for the alleged failure of the Americans to support their revolt against democracy, unequivocally oblivious, it seems, to how much the Americans had actually helped in brokering the coup behind the scenes. Publicly, Obama has been attempting all kinds of verbal acrobatics to accommodate the liberals and leftists by not calling the coup a coup. Their misplaced anger at the Americans, however, is not necessarily anti-imperialist, but is rather elicited by a narcissistic injury that the United States (like the Egyptian Army) had allied itself, if temporarily, with the Muslim Brotherhood and not with them, even though the US (like the Egyptian Army) had clearly abandoned the Brotherhood and given the green light to the coup. Their fulminations are their way of courting the Americans back to their camp where the Americans already are. The Wall Street Journal has already expressed its hope and expectation that General Sisi will be Egypt’s Pinochet. Some amongst the liberals are complaining that had the Republicans been in power, they would not have given this “soft” response to their coup that the Democrats have allegedly shown. But the Americans have not tarried at all in this regard.

The Americans are allies of all parties in Egypt and they are willing to let Egyptians choose who will rule them so that the US can then give them their marching orders as they did with Mubarak and the Muslim Brotherhood. All the Americans care about is that their interests are protected, and no member of the current anti- or pro-Morsi coalitions has dared threaten those interests. They are all vying to serve American interests if the Americans would only support them. In the last two and a half years, the Americans have been floundering, trying to determine who among those competing to serve them in Egypt will be most successful in stabilizing the country so that the US can continue its dominance as before.

For a year, we have been told that Morsi is Hitler, the Muslim Brotherhood are Nazis, and that they are consolidating their power so that they could later crack down on everyone else. Perhaps they were planning to do so, but no shred of real evidence has been produced to prove this. What happened, however, was the exact opposite; it was the coalition of liberals, Nasserists, leftists, Salafists, and the Mubarak bourgeoisie who called for, and cheered and supported, the coup by Mubarak’s army. Unlike the Brotherhood, who never controlled the army or the police, the latter two continue to be fully answerable to the Mubarakist bourgeoisie with which the liberals and leftists are allied.

Egyptians have been flooded with images that the “Islamofascists” were going to destroy the culture of Egypt and its identity with their intolerance, narrow-mindedness, lack of inclusivity, and anti-democratic policies. But it has been the liberals and the leftists, perhaps some would call them the “secularofascists,” who proved to be less open, less tolerant, and certainly less democratic than the “Islamofascists.” In the United States, the saying goes that “a conservative is a liberal who got mugged,” indicating in a proper American classist manner that the mugging of a well-to-do liberal by the poor turns the liberal against them, thus becoming a conservative. In the case of Egypt, one could easily say that “a secularofascist is a liberal democrat who lost to the Islamists in democratic elections.”

The army coup, which the leftists, among others, support, was not a coup by middle rank socially conscious anti-imperialist army officers who were supported by progressive anti-capitalist forces to overthrow imperial and local capitalist control of the country and the dictator that runs it (when the Free Officers staged their coup in 1952, within a few weeks they enacted laws that undercut the feudal lords of Egypt and redistributed the land to the poor peasants), but rather by top army generals who receive a hefty sum of US imperial assistance annually, and who have always been the protectors of Mubarak and his bourgeoisie. It is this army leadership that overthrew a democratically elected president — his incompetence and services to local and international capital notwithstanding.

Some of the leftists who are cheering on the coup seem to feel that their mobilization was successful because people are now educated and aware of their rights, which the Muslim Brotherhood was undercutting. But the education that the members of the anti-Morsi coalition have been subjected to, including the workers and the poor who joined its rallies, is an education imparted to them by the Mubarakist bourgeoisie through their media empires. It has not been an education emphasizing the Brotherhood’s neoliberal anti-poor policies, stressing workers rights, peasant rights, the right to a minimum wage, etc.

The Mubarakist media empire’s imparted education is an education that is not for the liberation of the poor, the workers, the peasants, and the lower middle classes of Egypt from capitalist and imperial pillage of their country and livelihoods, but rather one for the liberation of the “secular” Mubarakist bourgeoisie and its partners from the competition of the neoliberal Muslim Brotherhood bourgeoisie and its Qatari sponsors.

That the king of Saudi Arabia and the foreign minister of the United Arab Emirates, the sponsors with the Americans of the Mubarakist bourgeoisie, were the first to send their congratulations to the coup leaders, minutes after the coup took place, clarifies who, they believe, was liberated from whom. Within hours of the coup, the Mubarakist bourgeoisie also celebrated. On Thursday, July 4, Egyptian singer Mohammed Fu’ad, who had cried on TV two and a half years ago to express his sadness and despair over the toppling of his beloved Mubarak, was invited to open the Cairo stock market, which has been gaining billions of pounds since the coup. If the Qataris and the Muslim Brotherhood bourgeoisie won the first battle against the Saudis with the fall of Mubarak and then the second battle when the Brotherhood was elected, the Saudis and the Mubarakist bourgeoisie intend their latest battle, which they won by the removal of the Muslim Brotherhood, to be the final victory in the war for Egypt.

The goals of the Egyptian uprising from the outset, included social justice as primary. Both the Mubarakists and the Muslim Brotherhood have a unified policy against the social justice agenda of the uprising. But the anti-Brotherhood coup, which has driven and will drive many of their supporters to openly violent means now that peaceful ones have been thwarted, has transformed the uprising from one targeting the Mubarakist regime and its security and business apparatus to one that has joined Mubarak’s erstwhile war against the Muslim Brotherhood. If the goals of the liberals and the leftists are to bring about a real democracy with social security and decent standards of living for the majority of Egyptians who are poor, then the removal of the Brotherhood from power by military force will not only prevent this from happening, but is likely to bring about more economic injustice and more repression.

Whether the leftists’ and the liberals’ calculations, that their alliance with the Mubarakist bourgeoisie and the army is tactical and temporary and that they will be able to overcome them and take power away from them as they did with the Muslim Brotherhood, are a case of naive triumphalism or of studied optimism will become clear in the near future. What is clear for now, however, with the massive increase of police and army repression with the participation of the public, is that what this coalition has done is strengthen the Mubarakists and the army and weakened calls for a future Egyptian democracy — real or just procedural.

Gripped by popular fascist love fests for the army, Egypt is now ruled by an army whose top leadership was appointed and served under Mubarak, and is presided over by a judge appointed by Mubarak, and is policed by the same police used by Mubarak. People are free to call it a coup or not, but what Egypt has now is Mubarakism without Mubarak.

*[This article was originally published by CounterPunch.]