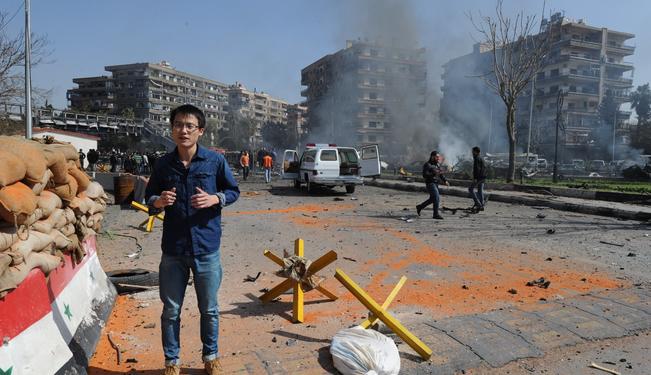 The Syrian conflict through the eyes of a Chinese war correspondent.

Syria has been making headline news for over two years as the battle rages on between President Bashar al-Assad’s army and the increasingly fragmented bands of rebel fighters.

Meanwhile, Libya, Egypt and other restive nations continue to grumble as the dust of the Arab Spring settles.

We often hear in Western media about the experiences of brave journalists reporting from the front line of these conflict zones. Some of the boldest have also been the most unfortunate, such as the veteran war correspondent Marie Colvin, who was killed by a bomb in Syria last year.

In the West, we naturally focus on issues from our own perspective. However, seeking another viewpoint is always valuable.

A Chinese War Correspondent in Damascus

Chinese news organizations have also been sending their reporters to Syria, where they have struggled to overcome their own set of challenges.

Chinese reporter Yu Zongjin always pretends to be Korean or Japanese when interviewing Syrian rebel forces in Damascus. If he gives away his true nationality, he risks kidnap or worse. Another Chinese journalist, a reporter for Xinhua News, was already kidnapped once in the Syrian capital. Fortunately he escaped alive, but the message was clear: the rebels hate the Chinese.

This hatred stems from the fact that China, together with Russia, has vetoed numerous UN Security Council resolutions, preventing UN-sanctioned foreign intervention in Syria; something many rebel and opposition factions have demanded. The rebels hate the Russians too, thanks to President Vladimir Putin’s support for Assad.

In contrast, BBC and CNN reporters can usually enter rebel-held zones with ease.

Yu arrived in Damascus in August 2012, when the conflict was in full swing. Visa restrictions kept Yu and his colleagues from China state television (CCTV) within the Damascus city limits, mainly conducting interviews with people from the Assad side. To maintain some semblance of balance in their stories, the CCTV team would try to interview rebel forces using Skype.

It was the only safe method, because the rebels could not be trusted. They may have planned to kidnap the team or harm them in some way.

The CCTV team struggled to find good, reliable rebel sources. Sometimes they would report on the rebels by interviewing proxies, such as Turkish or Jordanian "fixers." The team also used information gleaned from other media reports, often those produced by Western journalists.

In Damascus, the constant risk of kidnap hung over the heads of the Chinese journalists. They had to stay vigilant at all times, not just for potential kidnappers. According to Yu: “Most of the time we were afraid of snipers. Usually they stay hidden, but at the same time they can see you. That makes you extremely vulnerable.”

At that time, Damascus was littered with unexploded bombs. It was impossible to guess when or where the next one might explode. Suicide bombers were prevalent and caused massive destruction that no armor could protect against. Mortars added yet another layer of danger.

Yu said: “One night I was in my room at the Four Seasons Hotel when I heard a mortar go off on the roof nearby. It was too close for comfort and reminded me that the hotel could easily become a rebel target.

“Explosions usually come twice. One side bombs and the other side responds. One day we were out reporting in the street when this happened. Everyone was running away. I ran into a small shop to hide.

“I saw a lady, sitting quietly at her desk surrounded by destruction, just watching the scene. In Arabic, I told her I was sorry. She started to cry.”

Yu explained that the attackers bomb in pairs because people tend to gather at the site of an explosion. A second explosion causes maximum damage, wiping out many of the onlookers.

September 2013 was the tensest month so far for Yu and his team, as the US had just announced its intention to attack Syria. The UN had already left town and the Chinese team were expecting an attack to follow any day soon. They were preparing to leave and had already sent much of their equipment back to Beirut.

Yu said: “The idea of the Americans bombing Damascus scared us mainly because of the rebels.

“If Assad’s forces fell in the capital, the rebels would storm the city and perhaps take over the Four Seasons and the Chinese Embassy. We’d have nowhere left to hide.

“But if we’d left before the bombing started, that would be a different story. I believe that weakening Assad would have helped the situation, by achieving a power balance between his side and the rebel side.

“That could pave the way for talks to begin.”

Assad Has to Step Down

Yu can see only one clear solution to the never-ending Syrian conflict. “Assad has to step down. It may not bring peace but at least it will help end the major battles. The West intervened too late and even now they are not doing enough. They need to reach [an] agreement with Russia and convince Assad to leave. This is essential.”

When asked for his views on the future of war reporting, Yu said that he is convinced new media will never be able to replace actual war reporters in the field.

He said: “If you just let the people already in the war zone report events by social media, then for sure the story won’t be balanced.

“We still need professional trained reporters out there. To make it safer, they should receive better training, more insurance and more support."

“But there will always be reporters willing to take the risks of war, to see things no-one else will ever see.”

With the complex politics that entwine Syria, it seems the risk could now be greater for some reporters than for others.

*[Note: Yu Zongjin is a reporter for the Beijing-based CCTV news channel. He speaks fluent Arabic and has covered conflicts in Yemen, Libya and, most recently, Syria.]