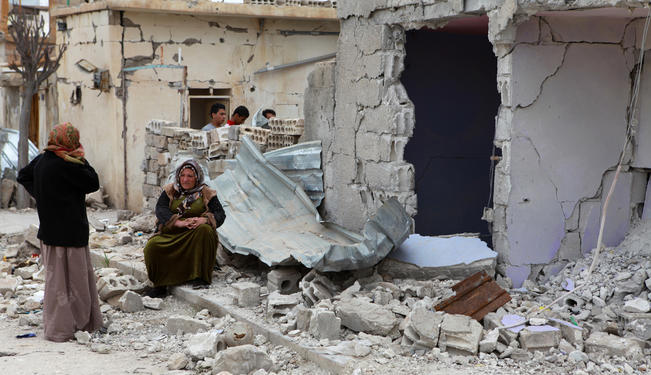 The rivalry between Saudi Arabia and Qatar will not cease to be a factor affecting events in Syria. This is the first of a two part series. [Note: This article was originally published by The Jamestown Foundation.]

The cycle of calamity plaguing Syria continues to intensify with no end in sight. Syria’s predicament today is far removed from the initial outburst of mass dissent witnessed in March 2011 that saw the Ba’athist regime violently suppress demonstrations demanding political change and reform. This sequence of events paved the way for the incremental militarization of the uprising by defected members of the Syrian army and ordinary civilians. While the circumstances behind these early episodes of the rebellion remain relevant, the initial displays of violent resistance combined with the formation of various competing political opposition blocs inside Syria and abroad have since given way to a lethal and expansive insurgency, increasingly influenced by hardline Islamist currents.

The stream of foreign fighters that are filling the ranks of the insurgency has added another layer of complexity to the Syrian imbroglio. These facets of the rebellion are particularly salient when contemplated against the backdrop of the opposition’s repeated demands for lethal arms and political recognition from foreign powers. In this context, understanding the role of foreign actors, especially the Persian Gulf monarchies led by Saudi Arabia and Qatar, in aiding and sustaining the various political and violent strands of the Syrian opposition, is essential to deciphering Syria.

Saudi Arabia and Qatar appear united in their opposition to the Ba’athist regime. This appearance of unity, however, masks a deeper rivalry for regional influence that is being played out in parallel with the broader, multi-dimensional proxy battle that has come to embody Syria’s civil war. This shadow conflict is reflected in the agendas of the competing factions being backed by Saudi Arabia and Qatar. The friction between Saudi Arabia and Qatar has been readily apparent as the Syrian National Council (SNC), National Council for Syrian Revolutionary and Opposition Forces (NCR), the National Coordination Committee for Democratic Change (NCC), and other movements vie for primacy within the Syrian opposition. The existing overlap in terms of ideology between the disparate insurgent factions and growing indications of their tactical and operational collaboration on the battlefield, does not offset the persistence of major rifts between these groups.

Widely viewed as the most active in its support for the Syrian opposition, Qatar has been accused of empowering many of the most ideologically extreme militant factions. This includes armed detachments affiliated with the Syrian Muslim Brotherhood and others associated with al-Qaeda, such as Jabhat al-Nusra (The Victory Front). Ultraconservative Salafist factions, such as Harakat Ahrar al-Sham al-Islamiya (Islamic Movement of the Free Men of the Levant) and the umbrella Syrian Islamic Front (SIF) under which it operates, are also known to be favored by Qatar. In contrast, Saudi Arabia is seen as enabling armed factions operating under the auspices of the Free Syrian Army (FSA) and its Supreme Military Council (SMC), as well as Islamist factions deemed to be lying outside of al-Qaeda’s purview. Saudi Arabia also tends to favor the factions that make up the umbrella Syrian Islamic Liberation Front (SILF), which is seen as comparatively more moderate than those who make up their SIF counterpart.

Officially, the US reluctance to provide more extensive and lethal forms of military support to the Syrian opposition is being attributed to the prevailing influence of radical Islamist currents within the insurgency. Reports that Saudi Arabia, with US encouragement, has effectively supplanted Qatar as the principal supporter of the Syrian rebellion add another layer of intrigue to an increasingly convoluted situation. The decision by former Qatari Emir Sheikh Hamad bin Khalifa al-Thani to abdicate his throne in favor of his son, may also suggest that important changes are forthcoming in regards to Qatar’s position toward Syria.

The new emir, Sheikh Tamim bin Hamad al-Thani, declared his opposition to the sectarianism and other divides that affect the Arab world. This statement may reflect a coming shift in Qatar’s stance on Syria to one that is more in line with Saudi Arabia’s position. Yet, the muddled and fluid nature of the Syrian uprising is not conducive to engineering an insurgency whose elements adhere to narrowly defined parameters. The role of independent financiers, charity organizations and sympathetic publics in Saudi Arabia and Qatar, among other places, is also vital to fueling the insurrection. The emergence of the Islamic State of Iraq and Syria (ISIS), a violent faction believed to be an offshoot of al-Qaeda’s Iraqi affiliate, the Islamic State of Iraq (ISI), has raised another set of anxieties. ISIS’s July assassination of Mohammed Kamal al-Hamami, an FSA commander and member of the SMC in Latakia, is illustrative of the extent of the ideological divides within the insurgency.

Due to Syria’s alliance with Iran and Hezbollah – a bloc known as the “Resistance Axis” – the uprising in Syria quickly assumed geopolitical overtones. The insurrection in Syria afforded the Gulf Cooperation Council (GCC) a chance to undercut Iranian influence in the Middle East. In this regard, the resort to sectarian vitriol by the Sunni-led monarchies and affiliated clergy emphasizing the Shi’a pedigree of the Islamic Republic and the prominent Alawite face of the Ba’athist regime was calibrated to stir up religious tensions between Sunni and Shi’a believers. The provision of support for radical Islamist movements, especially ultraconservative Salafist groups, has been central to the foreign policy of Saudi Arabia and fellow GCC members.

Consequently, the positions of Saudi Arabia and Qatar are often portrayed interchangeably when it comes to their shared goal of toppling the Ba’athist regime. Their fellow GCC allies, particularly the Sunni-led monarchies representing the United Arab Emirates (UAE), Kuwait and Bahrain, as well as wealthy private donors, religious associations and ordinary individuals, have likewise provided extensive moral, financial and logistical support to the political and armed factions struggling against the Ba’athist regime. Saudi Arabia in particular saw the uprising in Syria as an opportunity to undermine the Hezbollah-led March 8 coalition in Lebanon, while strengthening the March 14 coalition headed by the Sunni-led Future Movement.

The fall of entrenched despots in countries such as Tunisia and Egypt, coupled with the groundswell of grassroots mobilization in Bahrain that would later prompt Saudi-led forces to intervene to prop up Manama under the auspices of the GCC’s Peninsula Shield force, sent shockwaves throughout the Persian Gulf. The ongoing crackdown by UAE authorities against purported members of the al-Islah (Reform) movement, which is accused of engaging in subversive activities and receiving support from the Muslim Brotherhood in Egypt, combined with intensifying exhibitions of dissent by opposition forces in Kuwait, continue to raise anxieties within the GCC. While not a member of the GCC, Jordan is also highly vulnerable to the developments emanating out of Syria. It has become apparent that the royal dynasties are no longer insulated from the political turbulence shaking the Arab world.

A close inspection of the respective approaches of Saudi Arabia and Qatar toward Syria reflect divergent strategies. While a number of the key protagonists closely involved in Syria, including Saudi Arabia, have formally cut ties with Damascus and are actively engaging with the opposition, Qatar, for example, has gone as far as to transfer Syria’s embassy in Doha to the NCR. While Saudi Arabia has maintained an uncompromising diplomatic posture toward Damascus, the realization has started to set it in in Riyadh that the Ba’athist regime has proven far more resilient and capable than initially believed, while there is a consistent inability on the part of the political opposition and insurgents to assert and consolidate meaningful authority and some semblance of legitimacy.