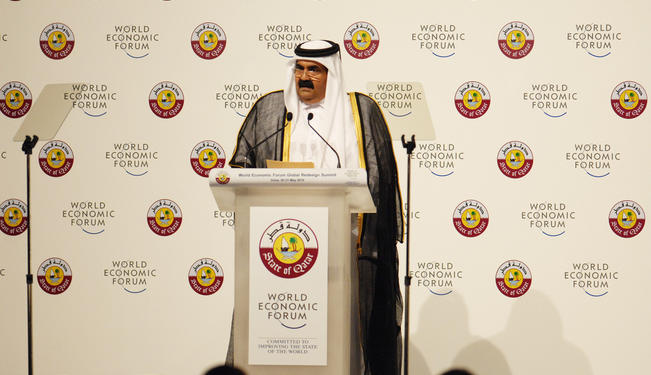 Will Qatar's peaceful and voluntary change of leadership set a new precedent in the Gulf?

The quiet transfer of power in the gas-rich Gulf state of Qatar from its emir, Sheikh Hamad bin Khalifa Al-Thani, to his son, Sheikh Tamim bin Hamad Al-Thani, is a significant turning point in the geopolitics of the Arab world. By handing over his mantle at the peak of his power, the 61-year-old emir has signalled the willingness of the ruling sheikhs to bow to popular demands for reform and change.

Indeed, he is offering the Gulf an alternative vision of leadership by stepping aside to make way for a younger generation at the height of his rule. A wave of demand for change sweeping the Middle East and North Africa only serves to highlight the significance of Sheikh Hamad’s move.

“The time has come to turn a new leaf where a new generation sweeps forward,” he declared in a televised address to the nation on June 25. “Our young men have proved in the past years that they are people of resolve,” Sheikh Hamad said.

Sheikh Hamad will be remembered as a visionary who put his tiny country on the world map, changed the media landscape of the Middle East and North Africa with the creation of the Al Jazeera television network, and turned Qatar into a nation with the world’s highest per capita income. Handing over power to his second son is an unprecedented step in a region where rulers hang on to power until death, even if they are beset by infirmity, physical or mental.

Few Qataris will question the achievements of Sheikh Hamad. His accomplishments notwithstanding, conservative segments of Qatari society, with whom Sheikh Tamim appears to emphathise, have questioned some of the side effects of the emir’s policies. These include high expenditure on a bold foreign policy that put Qatar at the forefront of regional demands for greater freedom and change, but also earned it significant criticism; unfulfilled promises of change at home that would give Qataris a greater say in where the country is going; a stark increase in foreign labour to complete ambitious infrastructure projects, many of which are World-Cup-related and have exposed Qatar to real pressure for social change; potential tacit concessions Qatar may have to make to non-Muslim soccer fans during the World Cup, including expanded areas where consumption of alcohol will be allowed along with public behaviour and dress codes largely unseen in the emirate, and the presence of gays.

Sheikh Tamim, 33, is expected to adhere to his father’s use of sports as a key foreign, defence and security policy tool to embed Qatar in the international community. Experts and pundits suggest that he will at best nibble at the fringe of his father’s policies by expanding the government’s focus on domestic issues. Sheikh Tamim has demonstrated his interest in sports as head of the Qatar Olympic Committee and by creating Qatar National Sports Day, a popular annual event on February 14. That move, coupled with his chairing of the Supreme Education Council, lies at the core of the suggestion that he will focus not only on the emirate’s regional and global projection but also on his country’s domestic affairs.

A discussion in Qatar about a possible transfer of ownership of soccer clubs from prominent Qataris, including members of the royal family, to publicly-held companies because of the lack of interest of Qataris in the “sheikh’s clubs,” illustrates a degree of sensitivity to popular criticism.

Sheikh Tamim has moreover enhanced his popularity by his close relationship to Qatari tribes, his upholding of Islamic morals exemplified by the fact that alcohol is not served in luxury hotels that he owns, and his accessibility similar to that of Saudi King Abdullah. He was also the driving force behind last year’s replacement of English by Arabic as the main language of instruction at Qatar University.

He is further believed to have been empathetic to on-line campaigns by Qatari activists against the state-owned telecommunications company and Qatar Airways. Sheikh Hamad appeared to anticipate a potentially different tone under Sheikh Tamim by urging Qataris “to preserve our civilised traditional and cultural values."

Much of the criticism of Sheikh Hamad’s policies have been quietly supported by Saudi Arabia whose relation with Sheikh Hamad, who came to power in a bloodless coup in 1995, has more often than not been troubled. Sheikh Tamim could well bring a different tone to Qatari-Saudi relations.

Since the eruption of the crisis in Syria, Sheikh Tamim has been the point man in coordinating policies with the kingdom and greeted guests as they arrived in March for an Arab summit in Doha.

“Sheikh Tamim will not rock the boat. He is well-versed and immersed in Qatari vision and policy. He understands the importance to Qatar of sports. At most, he will be more publicly embracing of traditionalism in what remains at the bottom line a conservative society,” said a Qatari insider.