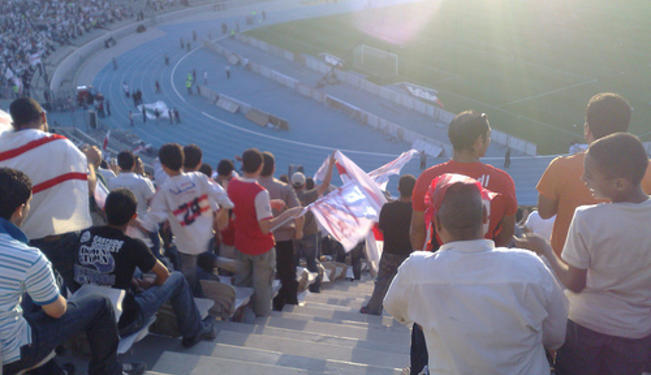 Investigations into the deaths of 74 fans in a soccer match at Port Said offer interesting insights into Egyptian politics, business and sport.

The deaths of 74 militant soccer fans in a politically loaded soccer brawl in the Egyptian Suez Canal city of Port Said has political forces across the country’s political spectrum scrambling to score points and counter a tsunami of rumours as security forces appear to have gained the upper hand in clashes with ultras and youth groups in downtown Cairo.

Military and security forces are accused of at best, negligence, and at worst, of having deliberately instigated the violence that led to the death of the fans immediately after last week’s soccer match between Port Said’s Al Masri team and Cairo’s Al Ahli team, Businessmen associated with the regime of ousted President Hosni Mubarak and fundamentalist Salafi politicians (who advocate Islamic practice as it was at the time of the Prophet Mohammed in the 7th century), are also being drawn into the maelstrom.

Yasser el-Mallawany, the chief executive of EFG-Hermes, the Arab world’s largest privately owned investment bank, denied allegations that he had funded an unidentified group of thugs who had reportedly mingled with the Al Masri fans and instigated the violence that led to the 74 deaths. Al Masri fans said they had noticed a group of people in the stadium that they had never seen before.

The allegations were reported after El-Mallawany was barred from boarding a flight from Cairo to Dubai on instructions from Egypt’s attorney general. Associated Press quoted a justice ministry official as saying that together with Mubarak’s imprisoned son Gamal, El-Mallawany was being investigated for having paid the thugs to attack the Al Ahli ultras. The ultras played a key role in toppling Mubarak and have since been the most militant thorn in the side of the military that succeeded the ousted president. El-Mallawany was a member of the policies high committee of Mubarak's National Democratic Party. He said his role on the committee was to "give ideas regarding the technical issues of finance".

Sources close to EFG-Hermes said El-Mallawany was among 300 people barred from leaving Egypt because of their alleged ties to the ancient regime and its corruption but that it had nothing to do with the incident in Port Said. Gamal Mubarak is believed to have an 18% stake in one of EFG Hermes’ numerous subsidiaries, EFG-Hermes Private Equity, that contributes an estimated 7% per cent to the bank’s total profits. EFG-Hermes has denied managing any funds or portfolios for Mr. Mubarak or members of his family.

“No charges of any form have been laid against Mr. El-Mallawany. The firm has been informed that the ban was issued as a precautionary measure, as similar bans have been imposed in the past 12 months on other individuals in Egypt,” EFG-Hermes said in a statement.

EFG-Hermes has offices in Egypt, the UAE, Saudi Arabia, Qatar, Oman, Kuwait and Lebanon and employs more than 850 people. It has advised companies such as Vodafone, Sainsbury and Heineken on deals in the region.

At the very other end of Egypt’s political spectrum, Sheikh Abdel Moneim El-Shaha, a controversial Salafist preacher, was attempting to talk his way out of reports that he had condemned soccer as a sin and said that the 74 ultras were killed because they had been watching a forbidden form of entertainment. El-Shaha charged that he had been misquoted. He said that while he considered soccer a sport like swimming, archery and horse riding that were encouraged by Islamic law, he objected to large sums of money being spent on the sport instead of on youth centres.

El-Shaha however did little to correct the impression that he was in-line with hard-line Salafist beliefs that condemn soccer as a game of infidels with his refusal to acknowledge the 74 dead ultras as ash-shuhada (or martyrs), an Islamic and Arabic term used to describe among others those who died in innocence. The families of the 74 describe their lost ones as martyrs.

El-Shaha was quoted by Al Arabiya, Asharq Al-Awsat and El-Badil as telling an audience in the El-Fath mosque in the Mediterranean port city of Alexandria, a Salafist stronghold, that the 74 people died while watching a forbidden sport that is alien to Muslims, distracts people from praying to God and that has been imported from the West. “They were not in a war fighting for God, they were just having fun. This fun distracts Muslims from worshipping God,” El-Shaha was quoted as saying.

The Salafist Al-Noor party won a quarter of the votes in Egypt’s recent first-post Mubarak parliamentary election. El-Shaha, who failed to win a seat in that election, earlier stirred controversy by demanding that statues which he denounced as idols be covered and by condemned the writings of Egyptian Nobel laureate Naguib Mahfouz as “prostitution literature.”

El-Shaha’s comments are in line with the banning of soccer on the threat of execution by the Al Qaeda-affiliated Al Shabab militia – which controls parts of war-torn Somalia. Earlier remarks by Egyptian Salafi Sheikh Abu Ishaaq Al Huweini and a 2005 attempt by Saudi Salafi clerics to rewrite the rules of the game, allegedly attempted to islamify it.

“All fun is bootless except the playing of a man with his wife, his son and his horse… Thus, if someone sits in front of the television to watch football or something like that, he will be committing bootless fun… We have to be a serious nation, not a playing nation. Stop playing,” Sheikh Al Huweini said in a religious ruling published in 2009 on YouTube. Al-Noor has yet to distance itself from Sheikh Al Huweini’s comments.

Al Noor has also yet to take issues with views such as those expressed in 2005 in a controversial ruling by militant clerics in Saudi Arabia, the world’s most puritanical Muslim nation where soccer was banned until 1951. The ruling denounced the game as an infidel invention and redrafted its internationally recognized International Football Association Board (IFAB) rules to differentiate it from that of the heretics. It banned words like foul, goal, and penalty, the wearing of garments like shorts and T-shirts and ordered players to spit on anyone who scored a goal.

In Egypt’s political centre, a parliamentary committee meanwhile blamed Interior Minister Mohamed Ibrahim for the deaths of some 15 protesters in the wake of the Port Said incident and called for a vote of no confidence in the minister.

Outside the Interior Ministry, security forces appear to have gained control of streets that were the scene of four days of pitched battles with ultras and youth groups. Leaders of the ultras have denied that they were involved in the fighting but admit that many of those attempting to storm the Interior Ministry are members of their groups who are beyond their control. The security forces gained the upper hand by using tear gas and birdshot after attempts to mediate a truce by clerics and activists had failed.