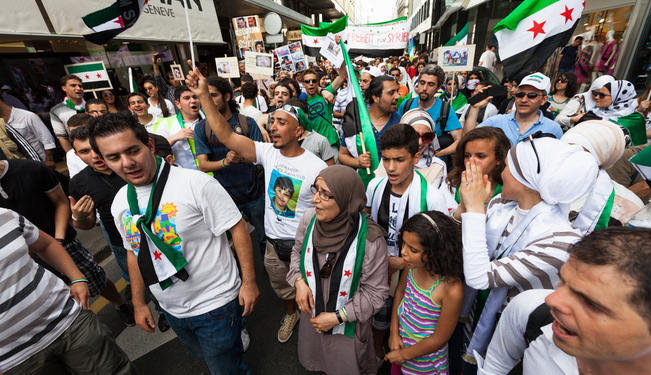 A "Sunni-Shi’ite" discord does not lie at the core of the Syrian conflict.

In attempting to shed light on the increasingly complex developments in Syria, more and more analyses, such as Dr. Josef Olmert’s article for Fair Observer in May 2013, have placed sectarianism at the heart of the current power struggle. The overemphasis on the sectarian factor does not constitute an analysis of reality, but rather a depiction of reality.

The conflict in Syria, including the political involvement of regional actors, has increasingly been explained through sectarian affiliation. Broadly speaking, Iran, Iraq and Hezbollah are argued to stand beside Bashar Al-Assad’s brutal regime, supposedly based on their shared "Shi’ite" identity, while Saudi Arabia and the Gulf states are claimed to be supporting the Free Syrian Army because of their "Sunni" identity.

Although the sectarian element is not always identified as the sole motivation, most analyses reference it as a key to understanding the dynamics of the conflict. Olmert, among other like-minded analysts, claims that at the very core of the conflict in Syria lies a "Shi’ite-Sunni War."

Calling the Syrian conflict "sectarian" implies that people’s sectarian affiliation is their primary marker of identity and defines their political interests. By highlighting sectarian affiliation as the main motivation for political actions, sect is often considered in isolation from other important factors, such as the socioeconomic class, geographic location or political affiliation of an individual. What often follows is an uncritical blurring of definitions between sect and religion.

The interchanging of religion and sect is an easily made, yet fundamental, mistake. While religion refers to a specific system of beliefs and practices, sect is a sociological phenomenon relating to the organization and dynamics of the groups concerned. In other words, religion is a doctrine with a fixed set of assertions, while sect is a fluid and constantly changing category. Sunnism and Shi’ism appear to become historical actors independent of the people who adhere to them. Clouding the differences between religion and sect only reinforces the idea that sectarian identities are immutable and the boundaries between sects natural.

The Creation of a Reality

In his article, Olmert employs precisely such a misleading understanding of the term "sect." In assessing Hezbollah’s support for the Syrian regime, he draws on a so-called "Shi’ite-Alawite connection." Olmert cites Imam Musa al-Sadr’s 1973 fatwa, which declared Alawites as part of Shi’ite Islam, to somehow "prove" the sectarian basis for the Hezbollah-Assad alliance.

By assuming an immutability of sectarian identities based on uncompromising differences, Olmert explains the political behaviour of Hezbollah and Iran as naturally supporting Assad’s government. However, there is nothing natural or inherent about this political choice. Rather, the decision to support Assad’s regime is influenced by a myriad of factors, including strategic, economic and military interests. A regime change in Syria would, for instance, complicate the flow of money and other resources to Hezbollah in Lebanon. Olmert’s Orientalist argumentation is less analytical than judgmental. The overemphasis on sectarian identity seems to point towards a backward Middle East, where religious violence is presented as an inherent expression of primordial ties.

Rather than presenting an objective reality, Olmert’s piece, along with others such as Patrick Cockburn’s article published in The Independent last year, is in fact creating a certain reality. Does that mean that sectarianism does not exist? No, sectarianism has to some extent become a reality on the ground. However, it has been presented as not only a factor to take into consideration, but seemingly the main factor in explaining the conflict today. These articles consciously frame reality in a way that stresses one element over many others, such as regime oppression or economic grievances.

Unfortunately, the more the Syrian conflict is depicted as a sectarian one, the more likely it is to actually turn into one. By referring to sectarianism as the "elephant in the room" and claiming that Arab statesmen, intellectuals and civic leaders avoid recognizing sectarian differences as the basis of their divergent opinions and interests, Olmert magnificently reinforces the notion that sectarianism is simply inherent to the region.

From the very beginning of the Syrian uprising, which took the form of peaceful marches and rallies, protesters were aware that their struggle could be exploited on a sectarian basis. Consequently, the majority of peaceful protesters made the conscious decision to reject not only sectarian explanations for the uprising, but also sectarian language itself.

This decision was linked to the Syrian regime’s attempt to paint the uprising as a sectarian encounter. In an effort to fuel fears among the Syrian population at home and abroad, Assad claimed that armed gangs and extremist religious groups were behind the attacks and destabilization of the country. The Assad regime used sectarian language as a cover up for its suppression of peaceful demonstrations.

What we are seeing today is the materialization of a sectarian discourse which was first rejected by many, and has now — after over two years of struggle and conflict, tragedy and destruction, and violence and militarization — become a reality on the ground. Considering the intense brutality from the regime’s side and the deteriorating situation, it is not at all surprising that the initial struggle for dignity and freedom has morphed into something ugly and perverse, which is now given names such as "Shi’ite-Sunni War."

The strength of sectarian language lies in the fact that it allows only a very limited scope for nuance and contestation. Once trapped within sectarian language, it becomes extremely difficult to critique it without reinforcing it in return. For instance, condemning the actions of Sunni extremists can quickly lead to justifying Hezbollah’s support of the Assad regime on the basis of sect, and vice versa. The only way of getting past this distortion is in rejecting sectarian language and moving beyond it.

Considering the state of the Syrian conflict today, is this argument useful? Is it not too late to turn around the clock? The answer is simple: The more time passes, the more difficult it will become to move beyond sectarian language. Like a self-fulfilling prophecy, sectarian language will only solidify sectarian identities, deepen mistrust and increase polarization. After more than two tragic years, one should not be surprised that sectarian affiliations are increasingly correlated with violence.

A primordial "Sunni-Shi’ite" discord does not lie at the core of the Syrian conflict, but rather an ensemble of powerful interests and discourses, which increasingly amplify sectarian identity as a political factor. Syria has become a regional sectarian battleground, not because it was a ticking sectarian time bomb, as Olmert and others are eager to claim, but because its fragility was exploited on a sectarian basis.