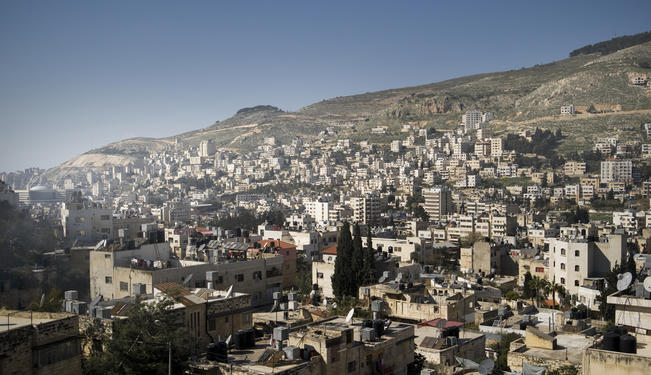 An orthodox American-Persian Jew discovers that the road to peace is paved with rice and opera. This is the first of a two part series.

Heading deep into the desert, from Ramallah to a small Palestinian village couched between the Judean hills, I can’t help but ask: “Who built this paved road beneath my tires and when?” I am shadowing the footsteps of so many who have made the trip before me.

They were either Arab families returning from the big city; shepherds seeking grazing land; Benjaminites en route to the Temple; Shin Bet officers looking for terrorists; or if they were reporter pilgrims, trying gauge the climate of a town immured by a wall. As my lemony taxi reaches the village, darkness softly replaces a rainbow sunset over the naked valley studded by only a handful of distant domes and spires.

I am not on my way home or to encroach on that of another. My destination is actually uncertain, but I know it involves food. After overhearing a confirming phone call, I assume my friend who sent me that Facebook invite waits outside a gated house near the Madrasa — which, if freshman Arabic serves me right, is a school — with about 40 Palestinians and Israelis inside breaking Iftar together.

Only 20 minutes from Jerusalem, these streets feel light-years away from the H.Stern and Ralph Lauren boutiques lining the Mamilla center I often pass to reach Ben Yehuda St. My hungry eyes take in new square apartments, next to a pile of rubble; old cement homes, next to a pile of stones; store fronts dressed in foreign graffiti of black, green and red, next to a pile of soot; and pockets of young people, next to a mound of rubble mixed with stones but not a trace of soot.

The car breaks. Samuel, the Arab-Israeli photographer I met just a few hours ago, rolls down his window to ask a group of smiling kids on bikes too big for their still growing frames, where the Madrasa is.

“Those are some VIPs,” Samuel quips. “Very important Palestinians,” he explains to us, thwarting the silence about to fill the car.

After a year in an orthodox Jewish seminary, I’ve almost grown averse to shaking hands in Israel. As the Biblical law forbids touching the opposite sex until marriage, I’ve grown so careful with my arm that I now catch myself snubbing friendly gestures from females who just want to make my acquaintance.

Yet while feeling the hairy fingers of my host – a burly Palestinian male — gently wrap around my own, I indulge in a minor slap in the wrinkly face of history.

This is not your presidents’ meeting, and definitely not your neighbors’ Iftar. Israelis, Palestinians, and an anthropology student from Amsterdam gathered in this West Bank village, as part of an initiative led by the YaLa-Young Leaders movement, to express support of renewed Kerry-Abbas-Netanyahu peace talks.

But it is more the faces I share this meal with than those on TV which interest me.

Growing up in a home with both a Persian mother and grandmother, while being fed Abrahamic stories at school, I can attest to the raw ambivalence of Middle Eastern hospitality. It’s a phenomenon that will leave a guest confused over which sentiment supersedes — bonhomie or awkwardness.

When entering a Persian house, blistering chai, assorted nuts, fresh fruit and at least a fancy bowl of gaz, the traditional pistachio Persian nougat associated with manna that Hebrews ate in the desert, await the guest — but there’s one catch. Before any conversation or digging in, the visitor must refuse his hosts’ every offer twice and accept upon the third, in a process which has become great material for Iranian comedians, taroof.

I can feel the Persian pressure as my guest offers familiar smelling rice and meat, but the weight of kosher guilt is even heavier.

“I actually just ate. Shukran though.” I lie on his third insistence, trying not to break too many commandments at one village.

What exactly is an American-Persian Jewish girl even doing in an unidentified Palestinian village? How it all transpired is as nebulous as the difference between nebulous and Nabulus to me as well; yet I do know something started with a Facebook message around five that same afternoon.

The previous week, at a friend of a friend’s house warming party in Jerusalem, I met an interesting Middle East reporter who also doubles as a striking Edward Cullen doppelganger. Edward, my friend – a Technion professor in his late thirties — and I started blathering for some time over banal topics like Ivy League educations, which led into a heated round of Jewish geography. Beside us, a group of Argentinians who recently moved to Israel amassed into a group picture pushing Edward into the frame, who then dragged the professor along with him.

“Do you think he was gay?” my friend asked on the way out. “He wore a tight pink V-neck, and he definitely seemed more into me than you.”

The following Tuesday, Edward sent a Facebook invite my way. I didn’t catch a title, but the description read: “A blessed gathering breakfast in Ramallah, on the honor of Yala and the start of new peace negotiating. For the Israelis, Palestinians and international.”

“Why organize breakfast at six in the evening?,” was my initial reaction. But on the second read, I understood he invited me to literally break the month-long Muslim fast with real Palestinians. I messaged the listed people regarding transportation. Nevertheless, as no one responded, I figured Ramallah would have to wait.

Around five in the afternoon, I get that tingly sensation. You know, the fuzzy feeling one gets as a powder blue Facebook inbox turns a tantalizing red, indicating “you’ve got chat!”

Even with the help of a prayer quickie, there is no way I can make it in time. Edward suggests I travel with his friend, Samuel, whose last name blew a shofar and announced his origins — Arab. I wonder if this is all just a plot to kidnap seminary girls; after Gilad Shalit, the public might have had enough with this whole steal a soldier and get 1,027 prisoners free deal — what about the everyday woman?

Discounting the danger, I summon my friend Eitan to join, head in a cab, and look through my prayer book for an appropriate psalm.