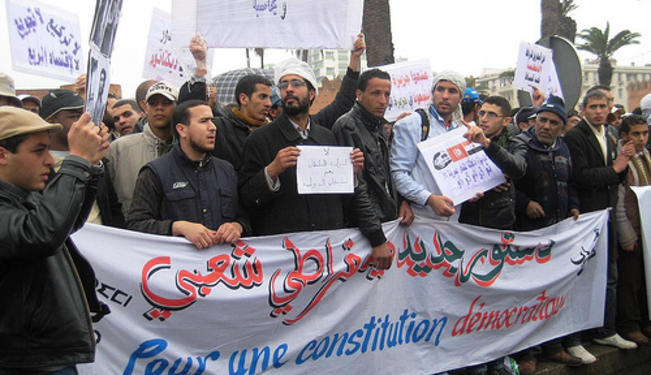 Despite modest constitutional reforms by the Moroccan King following the start of the "Arab Spring", Morocco is not an exception to the regional political upheaval and could soon see its own uprising, argues Fouad Oujani.

In spite of the reforms declared by King Mohammed VI, the Moroccan ruler still holds major control of the executive, legislative and judicial powers. Demonstrations for the February 20th Movement have been taking place in cities and villages over the country denouncing the appointment of Fouad Ali El-Himma, former State Secretary to the Interior and a lifetime companion of the king, as an adviser to the Royal Cabinet.

During El-Himma’s control of the Ministry of Interior, Morocco knew of various human rights abuses. Most notable was the discovery of a secret detention center in the city of Temara which was run by the Directorate for the Surveillance of the Territory (DST). Some detainees were able to smuggle videos out of their cells where they claim to have been tortured by members of the DST. Such videos were immediately posted on YouTube and have exposed the viciousness and brutality with which the kidnapped persons were treated. In one of the videos, Bouchta Charef, once detained, alleges that many people died because of torture at the hands of the secret police.

The Temara secret detention center is one of the Black Sites operated by the US government and its surrogates, which were first officially recognized by former US President George W. Bush in late 2006. Non-Governmental Organizations (NGOs) such as the International Committee of the Red Cross, and several media outlets have reported details of the Black Sites' practices, yet the Moroccan government still denies its existence. At present, no independent investigation has been conducted on the site as it may affect top governmental figures, including the king himself.

For many activists within the February 20th Movement, these illicit governmental connections could explain the Moroccan regime’s reluctance to carry out genuine reform and devolution of power to the people through representative bodies. Although King Mohammed VI has abandoned some of his powers, he is still the de-facto ruler before a new, vibrant and intellectual generation demanding a parliamentary monarchy.

From the viewpoint of many independent Moroccan constitutional jurists, the new constitution written by a committee appointed by the king is only a manipulation of political speech and the change has only affected the form instead of the substance.

In addition to the abstinence of 55% of eligible voters from taking part in the 2011 parliamentary elections, where Morocco's Justice and Development party (PJD) declared victory, the royal powers narrowed the margins of freedom for the new Prime Minister to form a government that people can ultimately trust. Under the leadership of Mohammed Al-Marwani, the Ummah Party, one of the few opposition parties in Morocco has issued a lengthy statement about the current political environment, emphasizing that the results of the most recent elections “cannot be adopted in building the popular political legitimacy of the ensuing institutions… [and that] reasons for popular uprising against the tyranny and corruption still exist”.

Despite French support for the new government, the trivial reforms will not prevent the Arab Spring uprisings from affecting Morocco.

According to local authorities , approximately twenty people were injured, and five seriously wounded, in recent clashes between students and security forces in the central city of Taza. The clashes took place in neighborhoods surrounding the University of Taza, when students wanting to join a group of unemployed graduates who were observing a sit-in outside the prefecture’s headquarters of the province of Taza, threw stones at security forces, the same source claimed. Subsequent incidents occurred near the headquarters of the province where demonstrators burnt a police vehicle.

Even if this incident was relatively small, it shows how at risk the regime can be in the face of popular uprisings, especially if they occur in other parts of the country. The monarchy knows that the use of force in the current circumstances will not be a viable solution to quell public anger and that any error could lead to a fate similar to that of the Tunisian, Egyptian, Libyan, Yemeni and Syrian regimes.

The people’s demand for the prosecution of corrupt officials has not been met as the latter are either acquaintances of the king or have been appointed to the new government by His Majesty to ensure their immunity to potential legal actions. For instance, the ex-Prime Minister Abbas El Fassi was appointed by the king as the General Affairs Minister. As Minister of Employment, El Fassi was implicated in the Annajat Scandal, which resulted in four suicides, twelve persons jailed and more than 90,000 victims of financial fraud through fictitious employment contracts.

When asked whether investigations might be forthcoming, the former Minister of Exterior Taib Fassi Fihri simply answered “No, no”. Fihri was recently appointed as adviser to the Royal Cabinet.

The same activists who have long demanded that the king takes action against corrupt officials who have misused their powers, are now not only questioning the integrity of the king but viewing him as the protector of the corruption. Significantly, dissidents who had previously been chanting Khubz, Hurriya, Karaama, Insaniyya(translating to: bread, liberty, dignity and humanity) are now calling for the king to step down.

Recently, five unemployed university graduates, protesting at the Ministry of National Education in Rabat, set themselves on fire after participating in a sit-in for several days. The Moroccan security forces had refused them access to food.

In a country with high unemployment rates, with 8.5 million people living in poverty on less than a dollar a day and with a king with assets worth at least $2bn, perhaps Morocco may not be an exception to political upheaval. The target "number six" in the list of the “Arab Spring” nations could coincidentally be a king whose name carries that same number: Mohammed VI.