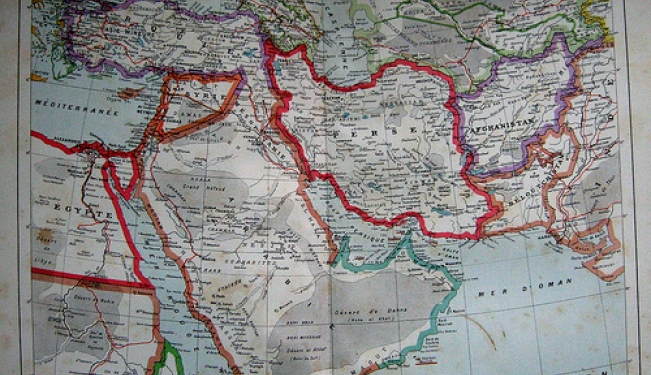 The ongoing Arab uprisings signal a ‘second coming of independence’ and a ‘non-colonial order’ throughout Western Asia and Northern Africa, argues Arshin Adib-Moghaddam.

Once upon a time there was a United States naval officer who invented a region he called the "Middle East". His name was Alfred Thayer Mahan (1840-1914) and he lived during a period when this "Middle East" was subjugated and colonized, when it was turned into a geopolitical "region" that could be defined by the office of a naval strategist whose penchant for US imperialism made him famous.

Since then, there exists a place the "West" imagines as the "Middle East" as if it has an existence of its own. Yet this "Middle East" is not merely a jolly good imperial fantasy. The Euro-Americo-centric designation buttresses the West's claim to hegemony, re-inscribing dependency into the very consciousness of the peoples and governments acting in that area. It is also distortive because it suggests that the "West" can control events there. It is indicative of this illusion that the "Middle East" is the only "region" that is still officially defined from the perspective of Europe and America.

But the old (post) "colonial" "Middle East" is withering away, at least since the invasion of Iraq in 2003. The ensuing mayhem, the immense loss of life and the horrific images of torture and death which accompanied that devastating war, put psychological and material boundaries on US foreign policies. The "Vietnam syndrome" has turned into an "Iraq pathology", exactly because political elites in the US were forced to accept that there are no military solutions to the conflicts in the region and that a military victory does not necessarily yield a strategic advantage. There seems to be an emerging understanding that events cannot be controlled by the barrel of the gun — that the area we have called the "Middle East" cannot be defined from here anymore — that there is both reciprocity (them affecting us) and autonomy (them doing what they want beyond our control).

As such, the Iraq war was a major step towards a post-American order in the area exactly because it revealed the impotence of military might in the contemporary international system. It also signaled the demise of the "Middle East" as a region defined in terms of dependency on us, the “West”. Today, when we look at the map we do not see an abstraction anymore, but concrete events: Abu Ghraib, Saddam Hussein, Gadaffi and Tahrir Square, civil society, democracy, calls for liberty, empowerment, revolution.

It is within this context of a non-colonial future that the Arab intifada (uprising) can be interpreted. If the revolution in Iran of 1979 uprooted a pro-western dictatorship from the country, the Arab uprisings have created their own possibility for independence. After all, Zine El Abidine Ben Ali and Hosni Mubarak were quite comparable to the Shah; they were kings of kings who were dependent on the US and skeptical of democratic accountability. "King of kings" was also a preferred title of Muammar Gaddafi, who lost the last residues of ideological support from his people when he turned himself over to the Bush Administration and the former British Prime Minister Tony Blair, during their inglorious "war on terror". Add Turkey's increasing distance from the US and its confrontation with Israel to the mix, and what emerges is a region that has ceased to function in a colonial mode.

What we are witnessing, then, is the second coming of independence which promises a non-colonial order. It signals the end of the "Middle East", which translates into the end of dependency on the "West". This is salutary for Europe and the US as well, if we finally accept and appreciate that non-western societies are writing their own history. They do not need us to dictate words to them or pester them with our patronizing wisdom. This is what the Iraq war and the uprisings should have taught us.

And then there is Iran, of course, which in 1979, much like Castro's Cuba two decades before, instituted a revolutionary narrative advocating radical independence for the country, the region and the "global south". The revolutionary emphasis on independence is one of the main reasons why Iran refers to the Arab uprisings as "awakenings". In the jargon of the revolutionaries of 1979, including Ayatollah Khomeini, being "awake" (or "bidar" in Persian) signified the prelude to revolutionary action: a society that was ready to struggle for its independence.

Of course, there are also many in Tehran who are delusional enough to assume that the Arab revolts are modeled after the Islamic revolution of 1979. Those Persian fantasies need to be ignored. But by and large, the emerging post-American order is viewed with immense optimism in Iran and with a good dash of anxiety, too. Optimism, because Iranian strategists assume (rightly so in my opinion) that governments that are more responsive to the preferences of their societies will yield foreign policies that are more friendly to the Palestinian cause and Iran itself, and by implication less acquiescent to the US and Israel.

Below the surface, however, there is anxiety too, especially among the right wing, which is subduing the demands of Iran's powerful civil society. They are aware that Iranians have been plotting their own intifada to reform the state for quite some time now and that today democracy and human rights, not only independence, are the measure of successful governance in the Arab and Islamic worlds. In the middle-to-long term, the Iranian state, which perceives itself a major player in this area, cannot be oblivious to that brave new world and its anti-authoritarian norms.