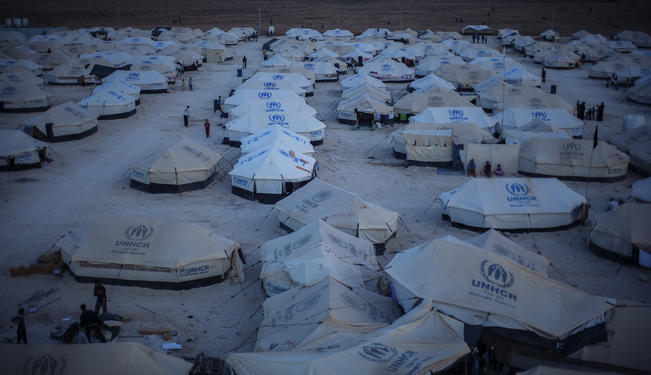 As the Syrian refugee crisis deepens, charitable trips have turned into publicity stunts.

Despite aid convoys developing into an institutionalised process of our global charity sector, the increase in the number of humanitarian relief convoys sent out is not proportionate to their affectivity in responding to refugees’ needs. I went to Syria as part of the preliminary “HayatConvoy” with a team of 15 youth activists from around the world. We saw first-hand the situation in refugee camps and hospitals on the Syrian-Turkish borders and suburbs of Aleppo. Our aim was to return home with a capacity to raise awareness and fundraise through our communities and local charities, and to make the media aware of the real needs and situation of the Syrian refugees.

Obsession with Publicity and Marketing

Today, we live in a world obsessed with publicity and marketing, which even our humanitarian relief sector has been tainted by. Many activists, NGOs, and policy makers only engage with refugees on a very superficial level and within a limited scope. They come back and it is said that they have travelled to the crisis zone, a press release is issued, pictures and footage flood the media and yes, they do manage to acquire minute bits of insight into the needs of refugees and displaced persons. However, with humanitarian aid becoming increasingly tied to corporate principles of success, it is losing its most fundamental objectives: engagement at a grass-root level and rectification of the root cause of suffering.

Humanitarian aid and charity work was never meant to be a feel-good workout that appears charitable and socially responsible. Direct engagement in humanitarian relief is actually a very difficult responsibility to take on. That is, when one chooses to do it right.

While in Syria, I met with an Egyptian doctor who had been stationed in a make-shift hospital in the suburbs of Aleppo for the past three months. Within only a couple of hours at the hospital, we had witnessed a live surgery in a room covered with fresh blood and equipped with little sanitation material or medical equipment; and we met several children who had become paralysed after their school was bombed and saw others rushed into the emergency room with torn limbs. A ten-year-old girl had her leg amputated from the knee down because it couldn’t be repaired, while a five-year-old boy had lost his genital system and left leg.

It is one thing to experience this for a couple of hours, and a completely different thing to live this horror day in and day out. This doctor made the difficult choice of leaving the comfort of his home and family to live in these dire conditions, in order to help Syrians in need. His sacrifice and giving is not comparable to that of activists or policy makers who wish to feel good about themselves by doing a few publicity stunts in a refugee camp. Hopping on board a convoy by raising a few thousand pounds (some of which is used to fund their own travel and accommodation) and coming back to tell the stories of their heroic encounters is certainly not relief work. Even the most established relief agencies are guilty of such practices as they take politicians and public figures on trips inside refugee camps and crisis zones to enhance their profiles.

I went to Syria because I like being proactive, I like to try and help or make a difference; it makes me feel good and less agitated and restless in life. When I came back from Syria, however, I wondered if my attitude towards making a difference could even be justified. I wondered if the plethora of convoys filled with volunteers and activists, or the high profile trips organised for policy makers, actually help refugees at all.

As we passed through camps, hospitals and schools in the suburbs of Aleppo, some refugees received us with welcoming smiles and an interest in talking to us. They believed we would help them right there and then, or that we would come back soon with what they needed. Others were more exposed to people coming into the camps; they were not at all willing to be interviewed, questioned or filmed, yet again without a significant betterment of their conditions in return. Syrian refugees are in a vulnerable state and it’s inhumane of our global community to exploit this vulnerability and rob what is left of their dignity.

Insights at the Grassroots Level

While we were on our visit, we went to the field offices of Human Appeal and other smaller international charities, as well as small local Syrian organisations like Watan, whose relief workers have been stationed in the crisis zone since March 2011. The insight they had about the situation, the sensitivity they had developed of how best to address the needs of a Syrian refugee – a mother who had been widowed, an orphaned child, a girl who had been raped, a teenager who had experienced enough death and violence to damage their future beyond repair – were real.

They engaged at a grass-root level with Syrian refugees and were closer than many policy makers or activists in understanding the root causes of the situation and how best to resolve them. A policy maker, relief worker or activist who is interested in making a difference, will put their lives at risk to do so properly because there simply is no other way.

Refugees in Syria are in need of every penny, not only to address their immediate needs of food, water, shelter, medical aid and psycho-social support, but they also need help to rebuild their infrastructure, education and healthcare systems, and economy for years to come. If humanitarian relief work is really about helping those in need, funds need to be channelled in more efficient ways; in ways that structure upon actual engagement with the people at the receiving end, and in ways that do not throw away funds for the sake of creating publicity out of people’s suffering. Our perception of humanitarian aid and relief work needs to be rehabilitated and reared in a manner that places beneficiaries’ interests as the prime objective.

Those of us who go into Syria and other crisis zones must have a clear purpose in mind. Waves of politicians, journalists, activists and researchers are jumping onto convoys and trips without having any direct influence on the situation of Syrian refugees. Even if their contribution is self-funded, they must think of the best way to spend funds if their intention is to help.

If you do have something to give as a medic, a volunteer, an activist or a policy maker, then do so but realise that it takes real cohabitation to get insight; it takes real sacrifice to feel good about helping someone in need. If you cannot do that, it doesn’t make you any less human and there are definitely other ways to contribute. But if you make the choice to do relief work, then do it right.

*[Editor’s note: The author has requested that the byline be changed to a pen name, Sophia Alabaster. In exceptional circumstances, the Fair Observer Editorial Board permits such a change but with a full disclosure to its readers. Updated: November 29, 2017.]