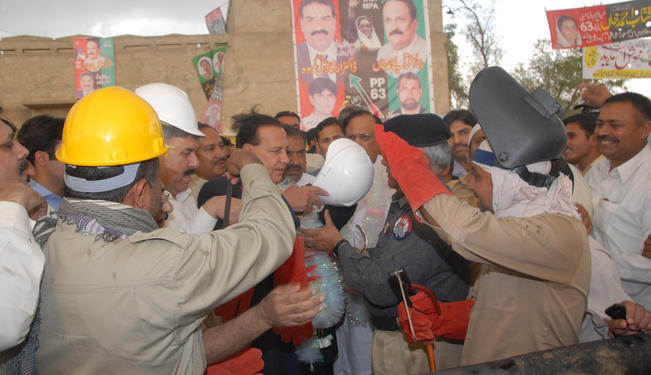 This is the final article in the three part series: Pakistan Beyond Bomb and Burqas. It examines the Loom Workers’ Strike in Faisalabad, and how it challenges hegemonic discourses on Pakistan dictated by the War on Terror. Read part one of the series here.

Faisalabad and its adjoining district Jhang are the hub of hardline Islamist movements Lashkar-e-Taiba (LeT) and Sipah-e-Sahaba (SS) which repeatedly target and direct popular agitations towards members of the Shia sect. The Faisalabad Loom workers’ strike, however, questions the potency and legitimacy of these sectarian divisions in everyday life. During this time, ordinary workers began to question such divisions among the poor and were united in their fight against the combined might of the local landlords, factory owners and the coercive arm of the state.

Faisalabad is Pakistan's third largest city and is often called 'the Manchester of Pakistan' due to its being the center of the country's textile industry. Out of the estimated total of 300,000 power looms in Pakistan, almost 200,000 are based in Faisalabad mostly in the form of small units in houses (Williams, 2012). In 2003, the Labour Qaumi Movement (LQM, National Labour Movement) was formed by power loom workers in response to police repression at the behest of influential locals and factory owners. Starting out from just sixty workers, by early 2012 the LQM had spread to at least ten other districts apart from Faisalabad and was beginning to organise workers in a country where only four percent out of a total labour force of 45 million Pakistanis had access to social security constitutionally guaranteed by the state.

In early 2010, the Minimum Wage Board had recommended that workers be given a pay raise of 17 percent. This was in the backdrop of almost a 50 percent wage increase for public sector workers and the government's rapid withdrawal of state subsidies on gas, electricity and petroleum. Tied into the privatisation agenda of international financial institutions, this had resulted in prices for some household items skyrocketing to upto ten times their initial value. While the wage increase was recommended by the Board, factory owners were also required by law to pay at least seven percent of the wages into the social security system. This, however, was conveniently avoided due to workers not being issued social security cards which would then give them access to, among other things, state-run pension schemes, hospitals and medicine. The working classes being obviously the most affected by such policy measures and repressive mechanisms began to organise in and around Faisalabad under the banner of the LQM for implementation of the recommended 17% wage increase.

On 6th July 2010, ten strongmen hired by factory owners stormed into the office of an LQM activist Mustansar Randhawa and killed him and his younger brother Naseer. Workers in the adjoining district of Jhang went on strike and at a public rally in Jhang in mid-July, the LQM issued the call for a general strike in Faisalabad. On 12th July, over 250,000 workers in Faisalabad went on strike demanding the recommended wage increase. This resulted in complete shutdown of 100,000 power looms in the city and the provincial government called in police reinforcements from six different districts to break the strike. On the eighth day of the strike, police and factory owners' hired thugs hemmed in a peaceful march of 20,000 workers and pelted them with stones, rubber bullets and shelling. The ensuing battle between police and workers continued for almost 10 hours resulting in several injured and subsequent arrests of 14 workers including 6 chapter presidents of the LQM. The strike, however, continued and on its tenth day a 25,000 strong march picketed the District Commissioning Officer's (DCO) house. After several failed attempts by police and local authorities to raze the camps set up by the strikers, the DCO gave in and ordered the factory owners to increase wages by the stipulated amount, register workers with the Social Security Board and issue them social security cards.

As a result of the strike, some of the earlier arrested workers were released but the six local chapter presidents of the LQM were tried by an anti-Terrorism Court. The trial was carried out under special laws promulgated by the Pakistani state to expedite cases of terrorism in the wake of Washington's WoT and on October 31st the six labour activists were handed down a combined sentence of 594 years in prison. Since, then there has been a renewed agitation by workers to secure the release of their fellow activists who have been sentenced by the courts for allegedly setting a factory on fire and injuring strike-breakers despite several inconsistencies in the witness accounts and various contradictory pieces of evidence.

In this regard, the case of Bawa Latif Ansari, a local organiser and eminent orator of the LQM, is particularly instructive. As a young man, Bawa was part of the LeT which played upon the fact that many of the local landlords in the Jhang area were Shia to stoke feelings against the Shia minority. However as he got involved in the LQM the realisation dawned on him that the material conditions of all labourers of the area were the same regardless of them being Sunni, Shia or Christian. It is there that Bawa's transformation and the transformation of his understanding of Islam started. Religion for Bawa turned into a radical philosophy of liberation and he started using his powerful oratory to instil solidarity among workers' against general exploitation by the landed and industrial classes. During the strike, Bawa's exhortations to workers often emphasised his understanding of religion as an source of strength and social justice:

"God is sovereign and God asks us to fight for justice. The bosses are nothing; we will not bow to them, these pharaohs."

Bawa's experience, the cross-religious alliances observed during the Faisalabad strike and the peoples' reinterpretation of Islam in the light of their own material conditions shows us the importance of Gramsci's 'popular creative spirit' whereby subaltern classes fashion ideas to transcend and legitimise their move beyond structures of power and domination.

The Faisalabad strike is important in another, often over-looked aspect .i.e. the nexus between the coercive and monitoring apparatuses of the state and capital. Authors such as Ayesha Siddiqa have already talked about the link between crony capitalism and various institutions of the Pakistani state (primary among them being the military). In the case of Faisalabad, labour activists have also commented on the close relationship between the Labour Department, responsible for ensuring workers' safety and that all workers are registered for Social Security, and factory bosses. Moreover, a recent article by Declan Walsh and Steve Geenhouse in the New York Times also highlights the links between global capital and the factory inspections' industry (2012). In the aftermath of a recent garment factory fire in Karachi which consumed the lives of almost 300 workers, Walsh documents the commodification of 'safety' certificates and the various certification agencies present in the Global North which outsource their inspection to companies in the South. The commodification of industrial safety certificates and inspections can also be seen as part of neoliberalism's creation of 'new spaces' as has been demonstrated before in the case of the corporate social responsibility industry (Sadler and Lloyd, 2009). These companies are in turn under pressure for quick turnover and certification of applications by factory owners. Considering that the aforementioned garment factory in Karachi was producing jeans mainly for a German retailer, the links between prevailing regimes of globalisation and outsourcing of manufacturing to countries of the global South are obvious.

Where the Okara struggle is a cross-class alliance between the rural landless and middle peasant classes, Faisalabad gives us an example of organisation among the urban industrial working class. In their own ways, they break away from earlier described dominant discourses about Pakistan and the Pakistani people. Moreover, resistance against encroaching neoliberalism under the auspices of the post-colonial state (and its imperial guarantors) is also a common thread running through the mobilisations. Where the Okara incident was directly tied into the military's attempts for further corporatisation of agriculture through concentration of land, Faisalabad provided an example where the industrial working classes are being squeezed by an alliance of capital and state. But they represent, in their unique ways, (arguably) effective resistance against the marching and interlinked forces of neoliberal capital and a repressive state apparatus violently disinclined towards any challenge to its political, cultural and intellectual hegemony.

Thus, it is through the highlighting of such movements and careful study with an eye on their proper historical contexts that we can start to move away from lenses distorted by global regimes of power. In doing so, we realise that understanding a country and its population through the binaries cultivated by War on Terror discourse and rooted in old-fashioned Orientalism leads us down the dark alley of one-dimensional modes of thinking and prevents us from understanding actual processes of change, contestation and resistance ongoing in societies such as Pakistan. Problems of historiography and representation with regards to countries and communities of the global South are not new and it is only through a conscious move towards a discourse centered on the people and their everyday struggles that such tropes of knowledge can be challenged. The challenge, as ever, remains to see history not as the deterministic flow of superior ideas and top-down processes of change but as actively shaped by masses of nameless, faceless people in the struggle over their own bodies, environments and material conditions.