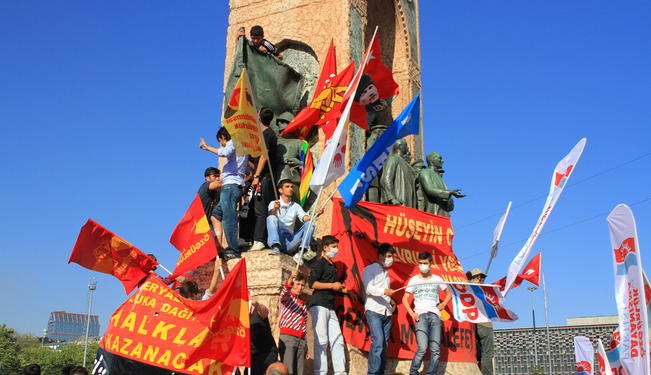 Protesters in Turkey are voicing their opposition to a democracy without democracy. Agnes Czajka and Bora Isyar analyze the build-up to the protests and the issues at stake.

Taking a page out of the playbook of dictators from Damascus to Algiers, Turkish Prime Minister Recep Tayyip Erdoğan has thus far refused any serious engagement with the thousands protesting the destruction of Gezi Park in Istanbul. His supporters have attempted to paint the protests as the work of fringe anarchists, atheists, foreign instigators, and government detractors. They have cited "ulterior motives" and alluded to secularist conspirators trying to unseat the ruling, religiously inspired AKP (Justice and Development Party). Turkish television has been slow to provide coverage of the violence that has enveloped the park and the adjacent Taksim Square, the solidarity protests from Los Angeles to Sydney, or the thousands who have walked across the Bosphorus Bridge to aid those who were being forcefully removed – with teargas, water cannons, fists and batons – from downtown Istanbul. There are reports of Internet outages in areas around Taksim. Public transportation has been halted. Taksim Square is becoming the Tahrir of Turkey. It might just be the straw that breaks the camel’s back. Even if it is not, the government’s reaction will not soon be forgotten.

The protests have been long in the making. Plans to redevelop Taksim Square (where Gezi Park is located) were announced prior to the general elections of 2011. They included the removal of all traffic through the construction of underground tunnels, and the razing of Gezi Park (the only green space left in Taksim) to make room for the (re)construction of Topçu Barracks. Originally a military garrison built by Sultan Selim III, the Topçu Barracks were demolished in the 1940s to make room for a public park in the heart of the city – today’s Gezi Park. According to the redevelopment plans – approved by the high commissioner for the Preservation of Natural and Cultural Artifacts in March 2012 – the reconstructed barracks would house a shopping mall and condominium residences. All park space would vanish.

Numerous associations of architects and urban planners harshly and publicly criticized the plans. They argued that the project would not only destroy one of the few green spaces left in the city, but would also obliterate the public character of Taksim Square, replacing it with the enclosed and inaccessible spaces of a shopping mall and condominiums. Many argued that the project’s intended aim was to reduce the human traffic in Taksim, so as to depoliticize and desocialize one of the most vibrant areas of Istanbul, and a frequent site of protests and social gatherings. Despite finding resonance among sizable segments of the population, the criticisms did not spark large-scale protests until almost a year later. Three separate events, beginning in December 2012, paved the way for the recent Gezi Park protests.

The first was the December 7, 2012, eviction of Inci Pastry House from its long-standing location on Istiklal Street in Taksim. A much-loved symbol of local Istanbul business, the pastry shop sold its renowned profiterole and lemonade in the same location since 1944. Its eviction – on the grounds that the building in which it was housed, a late Ottoman structure called Cercle d’Orient, needed to be renovated – sparked outrage, and suspicions that the "renovation" would in fact result in the destruction of the building to make room for a shopping mall.

The suspicions were confirmed in March 2013, when the adjacent Emek Theater – an independent cinema in operation since 1924 and home to the Istanbul Film Festival – was demolished. Kamer Construction, a Turkish company infamous for building shopping malls in ostensibly protected areas, and with close business ties to various AKP municipalities in Istanbul, was given a contract to build a ten-story shopping center and movieplex on the grounds of the demolished building. This second event sparked significant protests in Taksim, to which the government responded with force.

It was becoming increasingly obvious that a major redevelopment of Taksim, without regard for the historical complexion of the area or the residents’ concerns, was about to take place. Resistance mounted, and when the municipal officers responsible for the destruction of Gezi Park arrived at their destination in the early hours of May 28, a group of fifty protesters were protecting the trees and the outer borders of the park. Among the protesters was Sıtkı Süreyya Önder, a BDP (Peace and Democracy Party) parliamentarian. Thanks to his credentials and courageous stand in front of the bulldozers, the protesters managed to halt the park’s destruction for the day.

The third strike came the following day. On May 29, while protesters were continuing their occupation of Gezi Park, Prime Minister Erdoğan was inaugurating the construction of a third bridge across the Bosphorus Strait. The project is itself extremely contentious. It will result in the uprooting of anywhere between 350,000 and 2,000,000 trees (the numbers vary depending on the source of information). Adding fuel to the fire, the bridge is to be named after Yavuz Sultan Selim, notorious for his massacres of Alevis within and outside of the borders of the Ottoman Empire. During the inauguration, and referring to the occupation of Gezi Park, the prime minister made the following statement: “It does not matter what you [the protesters] do. We made a decision…We will follow through with that decision.” For many, Erdoğan’s response confirmed the increasingly unabashed aloofness and despotism of the government. On the back of the demolition of the Cercle d’Orient and the attempted demolition of Gezi Park, the bridge’s inauguration ignited one of the biggest protests in recent Turkish history.

As the protests in Taksim swelled, the government responded with unbridled force.

In the early hours of May 31, police attacked thousands of protesters gathering in Gezi Park and Taksim Square. Hundreds of protesters, journalists, parliamentarians and passersby were injured, including the BDP MP Sıtkı Süreyya Önder, who was hospitalized following a tear gas attack. The police have made indiscriminate use of tear gas (which, according to news reports, has run out in Istanbul, and is now being shipped in from other municipalities), throwing canisters into hotels, cafes, and the Taksim Square metro station where people have taken refuge. In order to attend to the injured, the Istanbul Chamber of Medicine set up a mobile hospital in Taksim.

As news of the violence spread, more and more people began to make their way towards Taksim. By the early morning of June 1, thousands started to march from the Asian side of Istanbul to Taksim, crossing the Bosphorus Bridge on foot. They were met by police before reaching their destination. At the time of writing, eyewitnesses were reporting that dozens had been hospitalized, with many others injured in the streets.

Defying the expectations of many, the Gezi Park protests are garnering an unprecedented level of support. The show of solidarity between groups previously unwilling to share a platform has been extraordinary. Protesters have come from various age groups, cities, religious and political convictions, and income groups. Some have reached Taksim on foot or by chartered buses; others are sailing towards Taksim on their private yachts. Pro-Kurdish groups are standing in solidarity with Kemalist youth associations. Fans of rival football clubs are coordinating efforts to support protesters in various areas of Istanbul. Rumors of resignations by local and national level AKP politicians are trickling in, as are statements by state officers condemning the anti-democratic measures taken by their superiors. Tweets from Taksim tell stories of bus drivers parking their vehicles at the entrance of streets making them inaccessible to police water tanks; of public and private theater companies providing food and beverages to protesters; of luxury hotels opening their lobbies to those running away from tear gas; of taxi drivers and bus companies carrying protesters from surrounding towns to Istanbul and the injured to hospitals; of shop owners sharing their wireless networks with protesters to increase organizational efficiency. In solidarity, residents of various cities in Turkey, including Ankara, Izmir, Adana, Diyarbakir, Hatay, Mersin and Eskisehir, are gathering in public squares to voice their dissent – the most democratic of all rights – with the government.

Slow to respond with anything other than violence, the government offered the first televised response on the afternoon of June 1. Reacting to an announcement by the Sixth Court in Istanbul that the Taksim redevelopment project is illegal and should be halted immediately, Erdoğan declared his plan to disregard the judiciary’s decision and proceed with the park’s demolition. He professed himself democratically elected, and signed off.

In the Name of Democracy

As Istanbul awakens to what some have described as the “Turkish Spring,” protesters in Gezi Park and elsewhere are resisting not only the brutality of the police, but also attempts to hijack their acts of resistance. Denouncing those calling for army intervention on behalf of the people and refusing to be baited by accusations of religious bigotry and intolerance, the protesters are adamant that theirs is the cause of democracy. For months now, Erdoğan has responded to protests over government decisions with the adage, “I have made my decision.” On June 1, protesters in Gezi Park, together with the thousands of others who have previously opposed the “rehabilitation” of public spaces into shopping malls, the razing of forests to create roads and bridges, or the countless other decisions taken without consultations and in disregard for democratic processes, were voicing their opposition to a democracy without democracy. They have gathered under banners proclaiming, “Everywhere is Takism, Resistance Everywhere.” The state has reacted with a show of force unbecoming of even the weakest of democracies.