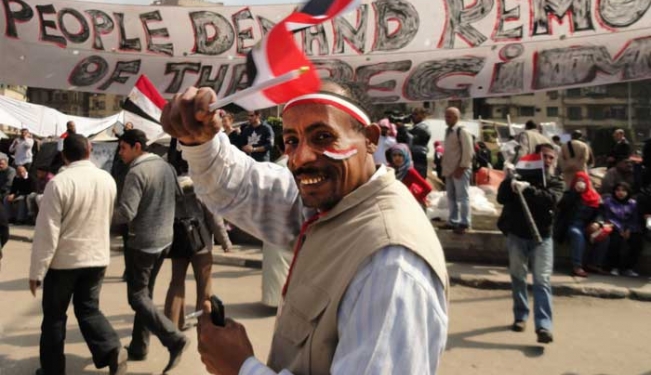 Omar Farahat examines the social, religious and political structures in Egypt that allowed Mubarak to rule for so long, and that eventually led to his departure.

Over several years of exposure to Western academia, I have let myself internalize one of its riskiest habits; namely, to recourse to Nietzsche whenever in doubt. This is precisely my position on the extent to which the occurrence of the Egyptian Revolution in January of 2011 was predictable. Of course, no self-proclaimed intellectual will admit that they completely failed to foresee this incredible turn of events. The same applies to attempts to analyze the event and its aftermath, and to situate them within fathomable sociological and historical patterns. The way out of this intense tension between intellectual pride and integrity is, of course, to recourse to Nietzsche. Thus, the Egyptian Revolution, I claim, is both completely random and absolutely inevitable. It does not have to be eitherone or the other. Nietzsche said so.

Of course, in retrospect, we can indulge ourselves in explaining how the Egyptian Revolution makes perfect sense in light of Egypt’s recent and not-so-recent history. It is also true that now I remember with some pride, moments in which I interrupted academic talks and friendly conversations that discussed the possible scenarios in Egyptian politics to indicate my conviction (or desperate hope) that the people of Egypt should not be counted out of the equation. Still, as thousands of people stormed into the streets of Cairo in unprecedented protests on Tuesday, January 25th2011, and as the events unfolded in the 18 days that followed, I, like many others, was in utter disbelief. Many knew that the Egyptian regime was increasingly fragile, and many realized that the pro-democracy movement in Egyptian was growing stronger; yet witnessing the actual confrontation between the two (loosely defined) sides, with the latter emerging victorious, was absolutely astounding.

The lessons to be learned from the Egyptian Revolution are too many to grasp, but one of them stands out as particularly central and intriguing: it takes plenty of skill and effort to be a successful dictator. Dictatorships, like any other enterprise, need organization, planning, and marketing to succeed. In order to be an effective dictator, you need a strong base of clientele (part of which ought to carry guns), a certain claim to legitimacy, and a population that believes that cooperation is less harmful than confrontation. To varying degrees, Egypt’s military rulers since 1952 have done a decent job of securing all of the above. However, it is possible to observe a gradual decline in all three domains over the years, and it is precisely the effort to trace this threefold decline that gives us a chance to claim that those events that took us by surprise were foreseeable.

The first two factors (legitimacy and clientele), to be sure, are closely connected in moments in which the dictatorship is not quickly collapsing. Shortly after 1952, the victorious Free Officers took quick steps to eradicate every group that played an active role in pre-1952 Egypt. After revoking the “royal” constitution of 1923, Nasser and his colleagues, headed then by Gen. Mohamed Naguib, proceeded to dissolve all political parties, declare a three-year interim period that later proved not to be so “interim,” abolished the monarchy and declared Egypt a republic. A couple of years later, the last British soldier stepped out of Egypt. In their quick steps to consolidate their control over power in Egypt, the Free Officers simultaneously got rid of pre-1952 elements of authoritarianism and oppression, but also of political groups that resisted those elements. This radical cleansing of everything political in Egypt would not have been possible had Egyptians not been genuinely frustrated with the endless games and struggles between the colonizers, the monarch, and the political parties. The Free Officers presented a quick and easy solution, and capitalized on the feelings of frustration, oppression, and nationalism that characterized this era. Due to the 1952 revolution, Egyptians were finally “free” (regardless of the fact that the 1956 constitution established a sole political party that included all citizens and controlled, by definition, parliamentary elections). The Free Officers who had just defeated the king and the British (and, incidentally, everyone else) with one blow, had a plausible claim that they truly represented the people of Egypt. Nothing sustains the plausibility of their claim more than the fact that large segments of Egyptian society actually believed it. Young Egyptians, filled with hope and national pride, joined government-sponsored educational, industrial, agricultural and cultural programs in masses. The Egyptian military was more popular than ever, and we hear stories about how every girl in Egypt dreamt of the day she would marry a handsome young officer. Legitimacy, therefore, generated clientele, and vice-versa. Expectedly, organized political opposition to Nasser’s reign was limited, sporadic and easily crushed. This is of course not to say that everyone was happy between 1954 and 1967. However, the then-new military regime had sufficient momentum and backing to make any effective organized opposition both burdensome and extremely risky.

The military defeat to Israel in 1967 was a major turning point. The nation that was somewhat united behind its once young and charismatic officers and the ecstatic dreams of post-colonial power and prosperity suffered a humiliating and crushing military defeat in a war that only lasted six days. The nation that gave up on the gains of its popular revolt in 1919 for the sake of quick and risk-free independence from colonization and socio-political stability saw its dreams shattered to pieces. One may ask: how did this defeat not trigger immediate and decisive struggle for democracy and an end to military rule? The interesting fact is that after 1967 there was a considerable growth in political activity. Opposition intensified during Sadat’s reign in the 1970s, coming from both leftist groups and the increasingly influential Islamists. However, this opposition called for gradual reform, and not a complete overhaul of the political system.

Shortly after the victorious crowds stormed into Tahrir Square in the afternoon of January 25th, I asked one of my friends: “What if we just stayed here and refused to leave? Wouldn’t this force Mubarak to resign?” He answered: “Don’t be too optimistic. This happened before in the 1970s. The protestors’ demands were met the next day, and they just left.” True, but 2011 is not 1977. In Sadat’s day, the 1973 military victory and liberation of Sinai was still recent. Sadat’s reinstatement of the multi-party political system (although spurious) and transition into free economy had revitalized his base of clientele. Egyptian intellectuals still had the luxury of engaging in comparisons between Sadat’s pro-West liberalism, and Nasser’s East-oriented socialism. Authoritarian rulers were accepted facts of life that academics and journalists were happy to assess and ponder over. In 2011, Mubarak had become a nightmare that many were ready to risk their lives and stability in order to end.

From as far back as 1970, Sadat, and later on Mubarak, used multiple political, economic and social maneuvers in order to postpone the inevitable: the collapse of post-colonial authoritarianism in Egypt. Mubarak early on in his reign was very careful to present himself as a man of peace, a ruler who lets everyone be, as long as they let him rule. This formula worked for at least two decades, after which the free fall began. While Mubarak thought he was doing what he does best by preserving the status quo — the ground beneath his imposing rule was shifting —Egyptian society was growing in numbers, complexity, sophistication and impatience. The so-called alternative Islamic sector had become increasingly entrenched in almost every town and village in Egypt and provided ideological and economic alternatives to the gradually disintegrating state. Large segments of Egyptian youth found alternatives to the failing public education in their familiarity with the internet. The more fortunate of the urban middle-class had a growing exposure to foreign and private education and media. Thus, they began to see Mubarak and his increasingly small and unsophisticated clique as a thing of the past, an embarrassing burden that had to be immediately eliminated.

When thousands of mostly young Egyptians left their homes in the morning of January 25th, their fears and hesitations was overshadowed by an intense sense of humiliation and embarrassment of having the 83 year-old Mubarak as their actual president, his son Gamal as the eventual heir, a steel wall being constructed between Egypt and the Gaza strip, and gas being exported to Israel at ridiculously low prices while Egyptian citizens spend days, and often weeks, struggling to obtain a gas tube. Any claim to the legitimacy of Mubarak’s ruling gang had been long gone. Mubarak’s faithful followers who were ready to crush the protestors to preserve his and their interests were neither numerous nor motivated enough to get the job done. Sure, a number of overzealous police officers dreaming of a raise and promotion shot and killed protesters at various times and places, but this was not systematic enough to turn Egypt’s revolution into an armed struggle a laQaddhafi. In the evening of Friday January 28th, groups of uninspired military officers and soldiers reluctantly moved into Egypt’s major cities by virtue of an order of their commander-in-chief. When ordered to penetrate Tahrir Square and “control” it, they just would not. They had no good reason to. And Mubarak’s regime collapsed.

The Egyptian civil society that managed to overthrow Mubarak is now at the forefront of the political scene like it was before 1952, except without British colonization, and with a much stronger Islamic element. These conflicting groups should no longer look for easy solutions: it is only through constant interaction, tension, and dialogue that a healthy, dynamic, and ultimately stable political system can be established. This time around, I hope we have learned our lesson.