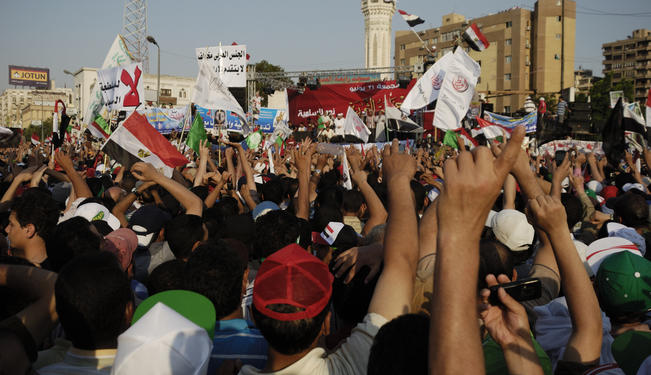 Pragmatism shapes the relationship between the Egyptian army and the Brotherhood. [Note: Read part one here.]

As mentioned in part one, the Egyptian army is both a military institution and a profit-oriented company. Because of that, it reasons in terms of costs and benefits. If a certain policy or a particular group is likely to engender a cost, the army will seek to oppose the policy or undermine (or at least co-opt) the group. Conversely, the military will support any initiative that will provide it with benefits.

This sheds light on the complicated relationship between the army and the Muslim Brotherhood over the last two years. After the popular revolution that ousted Hosni Mubarak in 2011, the army was worried about losing its economic prerogatives and advantages. Its first concern was to secure its grip onto power so it could influence army- and economy-related policies.

At the same time, the military did not want to be at the front of the political stage. It was, and always has been, well aware that this was a dangerous position. By being at the forefront of reforms, it would have been exposed to popular judgment — it would have risked losing its legitimacy and popularity. Therefore, to make sure it kept its privileges, the army has always sought to pull strings from behind the scenes.

When the army came into power following Mubarak's ouster, it was only because it wanted to organize and shape future Egyptian politics so they would fit its interests. As soon as a new parliament and president were ready to face the Egyptian people, the army went back to its position in the shadows.

Similarly, the military took the lead in July because they did not have a choice: prolonged political unrest would have threatened public order, and they needed to protect their own interests. The army is likely to cede power as soon as they have rearranged politics at their convenience, and ensured their economic privileges will not be threatened.

This preference for managing from behind the scenes is the reason why the military supported the Muslim Brotherhood's Freedom and Justice Party (FJP) in the 2011 parliamentary elections. Due to its long history as a political organization, the Brotherhood was the most popular and organized party at that time. In light of this, the army knew it was the most likely to gain from the elections.

Whether the two organizations had made a clear agreement is debatable. However, there is no doubt the army gave support to the Brotherhood, helping it to gain influence in the post-revolution era. The organization was allowed to create its political party, although religion-based parties were considered as illegal.

The constitutional committee appointed by the Supreme Council of the Armed Forces (SCAF) conferred a clear advantage to the Muslim Brotherhood, giving Islamists a leading role in writing a new text. Whereas many political parties called for drafting a new constitution before holding parliamentary elections, the army intensified its efforts to schedule elections as soon as possible.

This has been interpreted as an attempt to make sure that the Islamist party, being the most organized political player, would win. Thus, by implicitly and indirectly supporting Mohammed Morsi's party in the campaign, the military made sure the Islamist group would be cooperative and agree to maintain the army's interests once in power. This strategy paid off. The constitution set up by the new Islamist government in December 2012, safeguarded the army's economic and political prerogatives.

However, after the Muslim Brotherhood successively won parliamentary and presidential elections in 2012, it began to act independently and sought to override the military. In order to establish his legitimacy, Morsi began a game of arm-wrestling with the army. He tried to increase civilian control over the military and to strengthen its presidential position. Soon the army reacted. Thanks to popular discontent with Morsi's presidency, the army found the legitimacy to step in and oust the Islamist president in July 2013.

For the army to protect its economic privileges, it needs to:

Once again, the need to achieve this objective helps explain the recent behavior of the army vis-à-vis the Muslim Brotherhood. In the aftermath of the January 25 Revolution and while Egypt's political life was still chaotic, the Brotherhood appeared to be the most credible political organization in the eyes of many Egyptians.

This was mostly due to its long-standing involvement in charity work and social services, its organizational skills, and its well-designed political program. By supporting the Islamist organization, the army made sure it was in line with the people's aspirations, then increasing its credibility.

At that moment, the military and the Brothers were so close that many Egyptians began to suspect that the two organizations had allied themselves against the revolutionaries. But this apparent rapprochement was less the sign of a sudden passion between the two old brother enemies, than the result of a calculated strategy aiming to preserve the army's popular credibility.

However, in the exact same way the army turned its back against Mubarak during the January 25 Revolution when it felt the old regime was about to collapse, it turned its coat and stood against the Muslim Brotherhood when mass popular protests against the Islamists erupted.

By doing so, the army maintained its image of “savior of the people.” It sent the message that it will always stand by the Egyptian people, no matter what, against any form of authoritarianism or incompetence. Thus, to some extent, the army used the Muslim Brotherhood as a tool to gain social sympathy.

A third objective directly connected to the army's need to protect its economic interests is to achieve and maintain order. Without order, the Egyptian economy cannot run smoothly. Military interests would be threatened. Conversely, a stable political situation will provide an environment favorable to economic gains.

This obsession with order also influences relations between the army and the Muslim Brotherhood. In 2011, the political and security environment in Egypt were highly unstable and uncertain. There were daily sporadic demonstrations and sometimes massive protests.

Due to its relationship with the old regime and its brutal methods, the police was strongly castigated and forced to keep a low profile. This created a security vacuum. Thanks to their sense of organization and influence, the Muslim Brothers were one of the only groups able to provide a certain degree of stability in the country. By supporting the Islamist organization during this turbulent period, the army made sure to maintain a semblance of security.

However, from June 2013 onwards, the Islamist government began to lose control over the situation. On June 30, hundreds of thousands of Egyptians flooded the streets to demand that Morsi's ouster, as incidents of violence erupted across the country. The army feared this social discontent would create structural disorder. It decided to step in to take charge of the security situation.

Later on, as the Brothers themselves became a source of insecurity by taking to the streets to protest against what they called a “military coup,” the army did not hesitate to open fire on the same group it had backed two years ago.

Eventually, when an Egyptian court banned the Islamist organization on September 23, 2013, it was not the outcome of a long-standing hate vis-à-vis the Brothers. Rather, it resulted from the awareness that the Brotherhood posed a threat to the army's economic interests. By being unable to tackle a disastrous economic situation and by generating local disorder, the Islamist organization turned to represent more a cost and less a benefit.

Of course, the Muslim Brotherhood has not been entirely passive in this tumultuous relationship. This is especially true for those who have suffered persecution and torture under Gamal Abdul Nasser. Most of them have remained very suspicious of the military and have unwilling to cooperate with them. After Morsi was appointed as Egypt's new president, the Brotherhood attempted to “end the military rule” by weakening the institution and strengthening its own prerogatives.

Yet, the Muslim Brotherhood does not have the means for its ambitions. Each time the Islamist organization has tried to get the upper hand, the army has put it back in its place and made clear it would not let that happen. Likewise, the Brotherhood too has sought to “use” the army as a strategic tool. When protests erupted against Morsi's new “pharaonic” powers in November 2012, the Brothers asked the army to take charge of the security to ensure they would be protected.

Yet, the army is the institution that ultimately decides whether cooperating with the organization will be of any interest. As mentioned above, the military enjoys more structural advantages. This means they always have the last word.

Therefore, not only is the relationship between the army and the Muslim Brotherhood determined by the former's strategic interests in having the latter on its side. Rather, recent events also show that the mere survival of the organization as a legal political entity is in the military's hands.

Egypt's army might not reign. There is no doubt, however, that it does govern. By being too hasty in consolidating its power and imposing its vision, the Muslim Brotherhood may have missed an historical opportunity to step into the very tight breach of Egyptian politics.