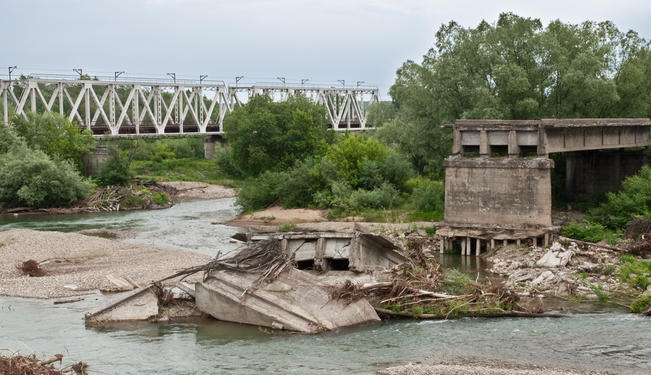 Syria's future may not be better off with regime change.

Once again, the West seems to be teetering on the edge of invading a Middle Eastern country that is revolting against a Ba’athist government. However, there is still a great deal of uncertainty that would make a military operation rash at this point. A consideration of the available options would be valuable.

At one end of the scale, we have the do-nothing option. If it is the case that the current Syrian government is using chemical weapons against the rebels (and, at time of writing, the UN report has not been completed), then a crime against humanity has been committed and sitting on the sidelines becomes a morally reprehensible action.

Even if it emerges that the government did not use chemical weapons, Syrians are still fleeing their homes in fear for their lives. If the governments of the West can do something to make the situation better, they have a moral duty to do so.

There are also economic sanctions, which the British government has already put in place. Medical aid should also be provided to anyone who needs it: This is a way of helping whilst keeping as far as possible away from the politics, provided that no group dominates the attention of aid workers.

Several charities, including the British Red Cross, are already providing humanitarian assistance, and the British government has committed £348 million, more than the UK has ever donated for humanitarian reasons before, to distributing food and medical care.

At the other end of the spectrum, we have full-scale military invasion – Iraq Episode II: Attack of the Drones. In any conflict there are inevitably casualties, both military and civilian. The main issue is that we cannot be sure that military action will make things better: There is a definite cost for a possible gain.

Much uncertainty about the results of a potential invasion stems from the nature of the revolution itself. Mainstream news outlets often talk about "the rebels" as if they are one group, but in fact there are several diverse factions vying for control.

There is a National Coalition for Syrian Revolutionary and Opposition Forces, which loosely ties together a handful of groups: the Muslim Brotherhood has a hand in it, as does the Syrian Democratic People’s Party (SDPP, a socialist movement), the Assyrian Democratic Organization, and a few others. There are also remnants of the Free Syrian Army (FSA), a force of military and paramilitary defectors and revolutionaries formed at the beginning the civil war, which itself is divided by region with parts of it frequently operating outside the direct supervision of its de facto commanders: Colonel Riad al-Assad and Brigadier General Salim Idris.

The groups also come into conflict with each other. For instance, the FSA has exchanged harsh words with the Islamic State of Iraq regarding the possible murder by the latter of an army commander. There is no single strong rebel alliance, just lots of separate groups who have yet to precisely thrash out how the new Syria will be structured when it emerges.

And here lies the uncertainty: Syria may not be better off with a regime change depending on who fills the power vacuum and how smooth the transition is.

Not only can we not tell whether Syrians will be better off under a new government, we cannot predict whether today’s rebels will be tomorrow’s enemies. Suppose the current regime is removed with military action: 20 years down the line we could end up invading Syria yet again because the new government is just as bad as, or worse than, the old one.

The same argument applies to another one of the options, which would be to supply rebels with weapons, armor or training. As well as probably escalating the violence in the region, that equipment and training could end up being used against the West in the future.

As is often the case in politics, it seems we need to choose the lesser of many evils. Since the principle issue is that it is impossible to predict right now what will happen to Syria if we remove the current government, perhaps a solution could arise from putting the ball back in the rebels’ court.

Suppose the Western governments challenge the National Coalition to write a constitution for a new Syria. They could specify that the constitution must establish a secular, democratic country in which all citizens are equal before the law and are entitled to the same benefits and duties regardless of race, gender, and sexuality. They should also ask the rebels to nominate members of a shadow transitional government that would oversee the transfer of power after the revolution is successful, and perhaps even a provisional date for a first election. An agreement not to use chemical weapons or other vicious tactics during the revolution would have to be reached, as well as a plan for dealing with members of the current regime once they are defeated.

We all remember the first glimpse of New Libya: a man beaten half to death in a ditch, stripped, and executed by gleeful crowds. However much some may feel that Muammar Qaddafi deserved his gruesome fate, if the rebels want to establish a better Syria, they must start by conducting themselves with a higher regard for human life than their oppressors.

The West should, therefore, request that Bashar al-Assad and his supporters receive fair trials for their crimes. In short, only when the rebels can provide assurance that Syria will definitely be better off without the Assad regime should military action go ahead.

I can foresee some objections to this plan. Firstly, the critics will say, it is paternalistic and imperialistic. We have no right to say that the best form of government is a secular democracy, and the Syrian people (or at least several vocal minorities within it) might not want it.

The question that these critics need to ask themselves is this: Do you believe that secular democracy is the only form of government, however imperfect, that respects the essential freedom of the individual?

I have defended secularism before, and certainly do not recognize the right of anyone to govern me unless I agree to it. This objection from imperialism will not dissuade me then — whatever its flaws may be, I would still prefer to see secular democracy win out over a religious dictatorship.

Secondly, we cannot know whether the rebels will stick to the agreement. This is, unfortunately, true, and the fact that some have already been accused of human rights violations by the Human Rights Council makes this a particularly knotty issue.

Further investigations would have to be undertaken to determine which factions were responsible for alleged atrocities before the West entered into a formal arrangement with any of them. However, if the rebels violate the terms of the agreement at any point after it is drawn up, then support will have to be withdrawn. If they go back on their promises once in power, then the sanctions currently in place should continue.

Thirdly, it is unrealistic. With so many diverse agendas between the rebel camps, a push for secular democracy is unlikely to be popular, especially among Islamist groups like the Muslim Brotherhood or Jabhat al-Nusra, whose stated goal is to bring Syria under shari'a law.

There are, however, some people in Syria who think that secular democracy is just what is required: the Coalition of Secular and Democratic Forces, led by Randa Kassis, for instance. If Kassis and her followers can draw up a suitable constitution, then this would eliminate much of the uncertainty that currently rules out military action.

In the meantime, however, Syrians continue to die in their hundreds. If Western governments can help with the crisis, we must do so with economic sanctions and medical aid. But, as the British parliament recently recognized, until there is a definite plan for Syria’s future that we can support, military action would be rash and almost definitely harmful.