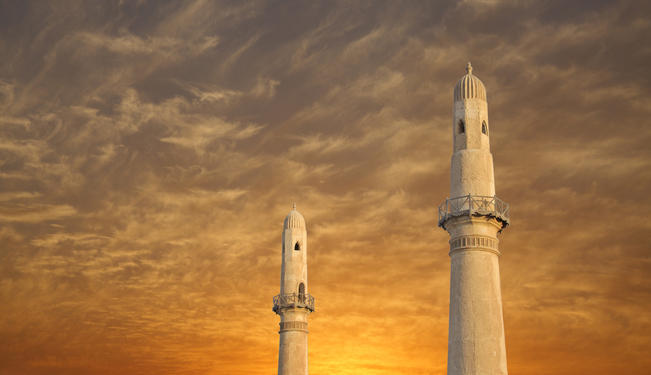 Robert D. Crane, former adviser to the late President Richard Nixon, discusses the role of shari’a and secularism, and the issue of whether the “Arab Spring” winds up as an “Arab Winter”. The following is an executive summary from the essay, originally featured in the Arches Quarterly.

The issue is human rights. The Qatar Foundation created a Center for the Study of Contemporary Muslim Societies, of which I became the first Director in January 2012, to explore where and how the Arab Spring and any Global Awakening have originated and the extent to which the theories behind them have been translated into practice. What these two phenomena are or might become will be shaped by where they come from. The issue therefore is what, whither, and whence.

In June 2012, the sociology-of-Islam listserve produced a veritable book of debate on the subject. One thread addressed the issue of the participants’ own subjectivity in hopes and expectations. To what extent were the discussants merely reflecting the Latin proverb de gustibus non est disputandem, “there is no disputing taste”. The master of mimetics, Professor Muhammad Fadel, who, as a Wall Street attorney, founded Muslims Against Terrorism in New York City immediately after 9/11, introduced the dichotomy between “creeping shari’a”, which is the beloved phrase of in-your-face Islamophobes, and “creeping secularism”, which is its opposite; though the jury is still out on which is creeping the fastest.

A term that requires understanding if it is to provide productive guidance in understanding the Arab Spring and its progeny, rather than serve as a barrier and challenge to communication and cooperation, is the “Islamic Caliphate”. Ideally this is based on the principle of khilafah, whereby every person, including both the rulers and the ruled, are responsible first of all to God as stewards of creation. This means that the institution of the caliphate is not military or political in nature but instead consists of the ijma or universal consensus of the wise persons and scholars on the nature and application of justice.

The most articulate and assiduous of the scholars on the meaning of the Islamic caliphate was Ibn Taymiya, who lived at the time of the Mongol invasion. Some Muslims, notably the Hanbalis, claim to honor Ibn Taymiya as their mentor, but they distort his most essential teachings. For example, many Muslims condemn Sufism as inherently un-Islamic, but they seem to be unaware that Ibn Taymiya was a Sufi who condemned the Sufi extremism that was spreading as a populist movement in his day. He also was an ardent supporter of the khilafah but not as an institution of military or even political governance.

Many Muslims often refer to “the Islamic state” as a goal of the Arab Spring. Such a concept is un-Islamic because an Islamic state is an oxymoron. Others refer to the state in the Western sense as dawla, a term that originated in the early 20th century. Better might be the terms Islamic society or community or system of governance. The best term to use is “Islamic polity”, fully recognising that there is no such polity in existence today and may never be. There are many Muslim states, defined as countries with a Muslim majority, but few, if any, of them qualify to be Islamic. This distinction is captured by contrasting Christianity with Christendom and Islam with Islamdom.

The concept of the state did not exist in all of human history until the Treaty of Westphalia in 1648 ended the “Thirty Years War” in Europe between the Roman Catholics and the Lutheran Protestants. In order to end the war, the contending parties agreed that until the end of time political authority would not come from any higher authority beyond humans, and that human power alone would determine what is right and what is wrong. This raised the question of managing human power. Some believed in elitism, sometimes in the form of Neo-Colonialism or more recently in Neo-Conservatism. Others proposed so-called democracy, usually in the form of “winner take all”, whereby a 51% majority of a vote was the only legitimate source of both law and ethics, though others advocated proportional representation in order to avoid the tyranny of the mob over minorities.

America’s founders deleted Jefferson’s opposition to the British monarchy from his first draft of the Declaration of Independence, because they were more concerned about what James Madison called the “elective despotism” of the mercantilist parliament.

The term “Islamic state” is an oxymoron, because the institutionalisation of human will as the highest source of truth is the exact opposite of Islam and of all the world religions. Unfortunately, the historical practice of Islamdom and Christendom shows that the norm was the same as today, namely, “might makes right”.

America’s founders believed that “right makes might”. They universally condemned democracy as the worst form of government, as did Aristotle, because they associated it with the anarchy and subsequent totalitarianism of the French Revolution, which gave rise to Communism, Nazism, and modern Zionism. The same may be the demise of the Arab Spring or any other spring in Iran, China, Russia, or even in America, unless it becomes more principled.

The drafter of the American Declaration of Independence, Thomas Jefferson, emphasised education in virtue as the basis for responsibility of the person and community for a divinely inspired society of faith-based freedom. This basis for a just society eliminates sectarianism and any effort either to prescribe or proscribe religion by political or any other pressure, which could be the natural result of the worst form of government, namely, a democracy.

The common wisdom of classical American and classical Islamic thought consists of recognition that both Islam and Christianity call for a republic, which by definition condemns the amoral and usually immoral institution of the state. A more generic term suitable for a republic is “polity”, which is the term increasingly used by experts in jurisprudence. An Islamic polity can be described perhaps best as a community or nation, and an economic and political system of governance that respects the human responsibilities and human rights enshrined in the classical understanding of the normative principles of Islamic jurisprudence.

This political self-determination presupposes economic self-determination, based on the principle of subsidiarity, which provides that all problems must be addressed at the lowest level and may be addressed at higher levels only when the lowest level cannot solve them. In a capital-intensive economy, this requires broadened and even universal and equal access to individual capital ownership through the institution of credit based on future profits from capital investment rather than exclusively from credit based only on past wealth accumulation, as pragmatically explained in detail in the books and hundreds of articles available at the Centre for Economic and Social Justice.  This bottom up, rather than top-down, ordering of society requires spiritual awareness and social solidarity at each of the lowest levels of community in order to shape the institutions of society as guardians for the ordered freedom of the individual. Without such freedom and community solidarity in promoting respect for human responsibilities (both fard ‘ain and fard kifaya, i.e., both personal and social responsibilities), political governance cannot protect the individual person from the imposition of order by elites and from the denial of human rights.

The four terms basic to Muslim usage in discussing the past, present, and future of the Arab Spring, namely, ‘asabiya khilafa, dawla, and democratia, require general agreement on their meaning if what began as a “spring” is not to end up in an “Arab Winter”. The first requirement of a revolution is to go beyond the stage of simple revolt in order to engage the substance of enlightened change by seeking peace, prosperity, and freedom through the interfaith harmony of compassionate justice for everyone.