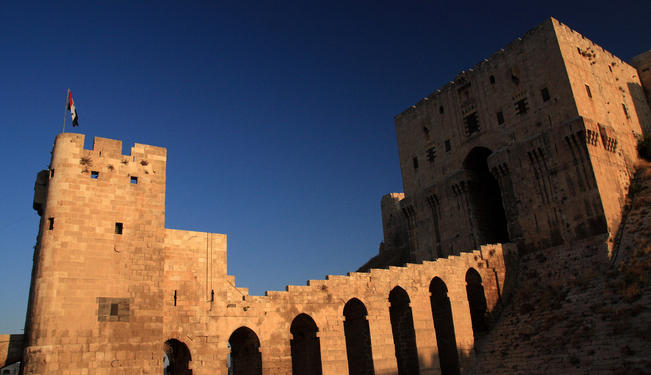 The ongoing fighting between the Syrian military and armed opposition groups inside Syria's largest city of Aleppo threatens to irrevocably tear this ancient and important city apart. This article, an analysis of Aleppo’s significance to the Syrian Civil War, is the first of two parts.

The Syrian Civil War has finally come to Aleppo. This city, the control of which is vital for Bashar al-Assad and his government’s survival, is aflame with conflict. The Syrian regime is in the process of unleashing the “Mother of All Battles” upon the armed opposition in Aleppo, which in return, has promised the international community that all of the city will be liberated in the very near future. Some analysts believe that the Syrian rebels are seeking to capture Aleppo not only to strike a massive blow to the al-Assad government’s morale, but also to use the city as a Syrian “Benghazi;” Benghazi was the free territory in Libya from which the Libyan rebels prosecuted their successful campaign to remove Muammar Qadhafi from power.

An ongoing and worsening humanitarian crisis, due to the fighting in Aleppo, threatens to leave millions of the city’s residents hungry and homeless. Currently, over 200,000 of Aleppo’s denizens have fled the fighting, with more said to be joining the displacement every day. The supply of daily essential items in the city such as food, clean drinking water, cooking gas, and medicines, already strained by the harsh economic struggles in Syria prior to and exacerbated by the uprising, are rapidly becoming inaccessible to a large number of people in Aleppo. The fighting threatens to make Aleppo both a humanitarian disaster as well as a battlefield.

Aleppo’s importance in contemporary Syria cannot be overstated. It is Syria’s largest city by population with over 4 and a half million people living within its limits or in its close suburbs. It is also, perhaps, Syria’s most illustrious city, and a great center of the country’s wealth. Aleppo is a majority Sunni-Muslim city with a large number of Christians (Arab, Armenian, and Assyrian), as well as other sectarian, ethnic, and social groups, including Kurds and Sunni Arab tribes. At present it is reported that these different social groups are highly distrustful of one another, with divided loyalties for and against the al-Assad regime.

Historically, Aleppo has always been blessed with a predominant place in Syria that caused it to be the envy of its rival, sister city of Damascus. It has been a center of commerce and culture since ancient times, and the city particularly flourished as the last major stop on the Silk Road before the Mediterranean and Europe. Aleppo was considered to be the third most important city in the Ottoman Empire due to cultural wealth and its economic power, based upon its craft industries such as in textiles. These industries attracted significant trade relations and investment from European nations, which led to its role as a market town for nearby and outlying agricultural areas.

Following the dissolution of the Ottoman Empire and the imposition of French Mandate rule over the territory that is now modern-day Syria, Aleppo was made a semi-autonomous “State” (province) by the French. It retained this relative independence until 1930, when it was joined with Damascus to form the State of Syria which would evolve into the Republic of Syria in 1936. It is the green, black, white, and red-star flag of the Republic of Syria that is waved so proudly by the Syrian opposition at demonstrations, and carried into battle as the war-banner of the Free Syrian Army (FSA) and its affiliated armed opposition groups now fighting the al-Assad government in the city.

Prior to the outbreak of the Syrian Uprising, Aleppo was experiencing significant growth in its tourist industry due to its numerous historical sites and its authentic Arab cultural heritage. Foreign investment, especially from the Gulf countries, was increasing to capitalize on the city’s natural appeal to the outside world. The University of Aleppo was welcoming a growing number of Western students eager to learn Arabic in a city that was considered a great capital of the Arabic language.

Within a decade, it was rumored, Aleppo would outrun its natural rival Damascus as the preeminent city in Syria, and become one of the most visited and invested cities in the entire region. All was not as rosy at it sounded, however. Aleppo, like Damascus, experienced inflation, increasing unemployment and a depressed wage market in several sectors due to an influx of economic migrants from rural areas in northeastern Syria. The lower-income suburbs of the city suffered the heaviest, as population density and wage deflation drove an increasing number of Aleppans into desperate poverty.

A Pivotal Battlefield in the Syrian Civil War

Before the current fighting in the city, Aleppo had been the site of both opposition demonstrations and pro-Assad demonstrations, with sporadic armed conflict in its poorer and more restive suburbs. Aleppo, however, was for the most part considered to be nominally “pro-Assad” due to the large number of socially conservative, Ba’ath Party-linked Sunni petit bourgeoisie that lived and did business in the city, its large Christian population, and the heavy presence of Syrian military forces in and around it. Anti-Assad demonstrations in the city were met by larger pro-Assad demonstrations, and the Syrian security apparatus was well-entrenched in Aleppo’s everyday life. The hinterlands of Aleppo belied this perception, as they were the site of fierce battles against the Syrian military by the armed opposition.

In spite of its ethnic and sectarian diversity, Aleppo is noteworthy for its strong Islamic culture. The city was named the “Islamic Cultural Capital of the World” in 2006. Aleppo’s pervasive Islamic culture was rarely viewed as a threat to civil cosmopolitanism until the current civil war brought an increase in sectarian-motivated violence and the infiltration of al-Qaeda fighters into Syria to wage jihad against the al-Assad government.

Armed opposition Salafist groups have been forming in Aleppo’s immediate suburbs and the hinterland of Aleppo Governorate. It is reported that members of the city’s Christian community have been threatened by these groups for their perceived pro-Assad political position. As a result, some of the city’s Christian residents, including its Armenian community, have turned to both the al-Assad government and allied ethnic and political parties in Lebanon for weapons to form neighborhood-level militias for communal protection.

The fighting in Aleppo has evolved into an existential battle for the control of Syria. Syrian opposition forces are seeking to earn irreversible momentum towards the creation of a post-Assad Syrian government on the battlefields of the city and its surrounding suburbs. The al-Assad government is hoping to turn its fight against the armed opposition in Aleppo into the decisive battle in the Syrian Civil War, and through a victory for its forces in the city to initiate the beginning of the end of cohesive insurrection against its rule. For both sides, defeat in Aleppo appears to be unacceptable.

Read the final part of Nicholas A. Heras' two part series on August 16.