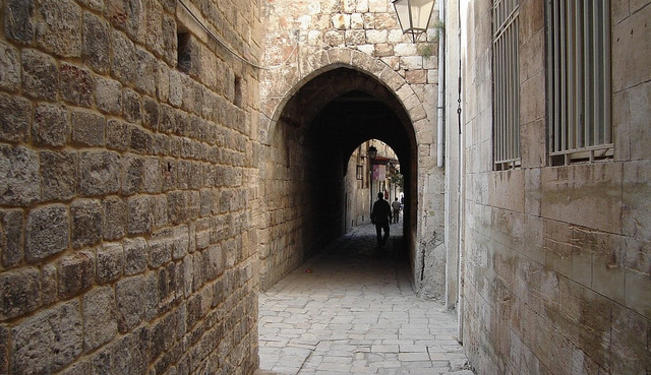 The ongoing fighting between the Syrian military and armed opposition groups inside Syria’s largest city of Aleppo threatens to irrevocably tear this ancient and important city apart. This article, a personal memory of the city, is the last of two parts.

Aleppo evokes pleasant memories. The city for me will always be the emerald-colored sky. Nights in the city were often a glowing green, a neon-soft light pleasant upon the eyes. The night-time sky above the city was illuminated from hundreds of mosques; their minarets cast a verdant shine. Aleppo was an ancient city full of energy and vitality. It always seemed grander than its sisterly rival, Damascus.

Perhaps this majesty was the product of over four thousand years of international trade and the mingling of diverse people in Aleppo. Or, perhaps, it was because the city was always a seat of trade and relied on the mercantile acumen of its people for its prosperity, while Damascus was a political capital, relying upon the capricious twist of political fortune for its importance.

Aleppo, unlike Damascus, after all, was one of the most important “links” in a great chain of cities that stretched from the Mediterranean to China. Its desirability was spun on the Silk Road. Aleppo was a truly “global city.”

Aleppo: A Cosmopolitan Core of Syria

Throughout its history a wide variety of people moved into Aleppo. The city has had multiple ethnic and religious identities that have impacted its daily life. Aleppo was a cosmopolitan core in Syria, the home of a rich variety of traditions. Ethnically, Aleppo was Arab, Armenian, Kurdish, Circassian, Turk, and Syriac. Religiously, it was Sunni and Shia Muslim, Christian, Ismaili, Alawite, and Jewish. These peoples brought with them millennia of fine craftsmanship passed down through their communities. Aleppo benefited from their knowledge.

Aleppo was a city of skilled tradesmen and investors, gifted in wood and metal-working, textile-spinning, soap-making, and cooking. It was the whirl and rush of humanity, gathered into one Middle Eastern city. It was an urban center of historical sights, upbeat sounds, and refined tastes. It was a mecca for those seeking an exotic gift for the well-beloved, such as a silk tablecloth, or an aromatic soap of honey and olive. The memory of its cooking lingered on the tongue of the visitor.

The spice of Aleppo was magic. It was a delightful mélange. Aleppo was symbolized by its signature dish, Kabab al-Karaz (a dish made with sour cherry sauce). When lovingly savored in an Aleppan kitchen, it was a kingly pleasure. A dish as diverse as its city, borrowing from Jewish, Muslim, and Christian cooking traditions, carefully balanced, neither sweet nor spicy, a perfect moment of bliss. Kabab al-Karaz was a welcoming culinary refuge, like its city, a recipe of cosmopolitanism. To be Halabi (Aleppan) was to belong to a special blend of cultural spice.

Aleppo: The Corpse of Syrian Multiculturalism?

Now, Aleppo’s bright night-lit skies are swallowed in cordite smoke. A great maw hangs over the city. War has come, and the relative unity of its diverse peoples may soon be swallowed by the tempest of sectarianism and religious fanaticism. Aleppo may soon become a corpse for the promise of Syrian multiculturalism. The great questions of a generation, on the lips of so many young Syrians, are now being shouted across the city’s streets.

What is the future of Syria? Where goes the Watan (homeland)? By what recipe will it be made and by what ingredients will it be served? The questions carry the bitterness of artillery shells, the rancidity of bullets, and a spoiled copper of blood. They are local questions, economic questions, socio-cultural questions, and geo-political questions; questions of great international importance.