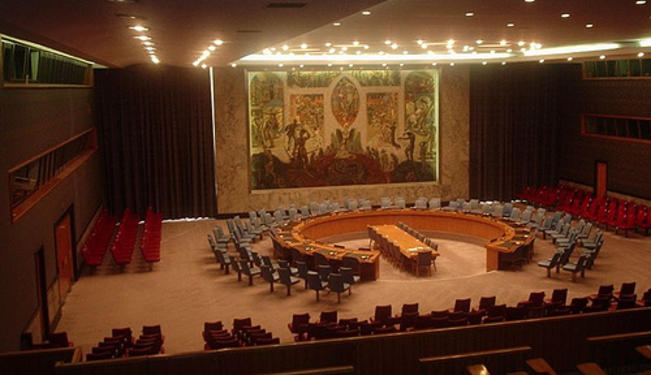 Analysis on the stance of several international players on regime change in Syria, and where this is likely to lead.

The failed vote in the United Nations Security Council on a resolution committing the UN to the Arab League’s Syria transition plan opens the door to an international free-for-all in which Syrian factions enlist foreign patrons, Russia mortgages itself to a terminally ill regime, and Iran has an opening to forge closer ties with Russia and China.

Worst of all, the delicate mosaic that is Syria threatens to shatter altogether, as Iraq did after the American invasion.

Spooked by Muammar Qaddafi’s ghost, the Russians have made clear that they will oppose any UN endorsement of regime change, whether explicit or implied. Western and Arab willingness to remove the specifics of the Arab League plan—in particular the call to ease Syrian President Bashar al-Assad out of power—won over four other council members that had been sceptical of the initial draft.

But even as India, South Africa, Pakistan, and Azerbaijan swung over to support the modified resolution, Russia and China dug in. They would happily support Arab League mediation between the Syrian government and opposition groups—but not the Arab League transition plan itself.

We shall see soon enough whether the Western states were wise in refusing to dilute the resolution’s promise of full support for the Arab League transition plan. Without UN rules of the road to contain the conflict, there will be multiplying pressures from many quarters to intervene, underscored by the swift suggestion from Connecticut’s irrepressibly interventionist senator, Joseph Lieberman, for the United States to start funnelling arms to the Syrian resistance.

Certainly the Russians have now put themselves in a cul-de-sac. They cannot expect to come out of this with Assad still on top, and they have burned their last footbridge to the anti-Assad forces to serve as a potential mediator. Whether Syria is consumed in long-term civil strife as debilitating as Iraq’s, or the Baathist government collapses under foreign economic pressure and internal violence, Russia risks losing its entire forty-year investment in the Assad family’s rule.

Russian policymakers became so hung up on re-fighting what they not unreasonably saw as the West’s hijacking of the Libya air-protection resolution for "regime change", that they seem not to have thought through the chess moves on Syria that would follow a Security Council deadlock. Even a resolution that went somewhat further than they would have liked—perhaps “welcoming” the Arab League plan without necessarily “fully supporting” it—could at least have ensured the conflict’s management would be tethered to the UN table, where they have a guaranteed place.

They seem not to have noticed that, far from having been aiming to bring down the Assad government from the start of Syria’s crisis, Western countries initially looked to the Syrian President to act on his supposed reform inclinations to open up Syria’s suffocating system. They only soured on him when he resorted to lethal repression instead—something for which Moscow and Beijing seem to have rather more tolerance.

It is not clear what Paris and Washington think the coming chess moves will be, either. By insisting on "full support" for the Arab League transition project despite the Russians' proclaimed red lines, they now have no UN-led process at all. Far from boxing Iran out, we may find they have opened the door to Sino-Russian backing for more robust Iranian efforts to prop up the Baathist government in Damascus.

In contrast to the Russians and Chinese, the Damascus government has spurned the Arab League’s mediation, declaring that the league is no longer has any credibility on the situation. Its press organs insist that the continuing crackdown against “terrorism” is essential for Assad’s dead-end package of political reforms to proceed. Having failed to agree with their council partners on a formula to give a UN imprimatur to Arab League mediation, the Russians and Chinese now have to provide hospice care for the sclerotic Baathist regime on their own.

Perhaps, as even Senator Lieberman seemed to suggest, there is still an opening for Russia and China—and perhaps, for that matter, other members of the Security Council—to re-think how to proceed together. The Russians had asked for the vote in the Security Council to be delayed till their foreign minister, Sergey Lavrov, returned from a visit to Damascus.

Syria’s victimized population has the most immediate stake in the council's coordinating international pressures to press the embittered Syrian sides into a political process not manipulated by either. But the international community has its own deep stake in avoiding a free-for-all.

*[A version of this article was originally published by Blog of the Century on February 6, 2012].