On January 1, former army captain and until then unsuccessful far-right politician, Jair Bolsonaro, has assumed Brazil’s presidency, having won the most polarized election in the country’s recent history. One of his main promises was to fight corruption and crime — a big issue in a country with 32.4 homicides per 100,000 inhabitants in 2017; Bolsonaro himself was stabbed at one of the rallies while surrounded by thousands of supporters. The cornerstone of his campaign, nonetheless, was to position himself as an alternative to the leftists, who commanded the country from 2003 to 2016.

Education was not a central subject for the presidential hopeful. Bolsonaro’s government plan promoted children’s education “without indoctrination” — a stab at what Bolsonaro’s first education minister, Ricardo Vélez Rodríguez, referred to as enforcing “Marxist ideology” in schools. After beginning his term, the president has reaffirmed the priority he placed on primary education. Now, a set of budget freezes to the country’s federally funded universities has provoked the first mass protests against the newly elected government.

Vélez Rodríguez, a Colombian philosopher and professor, did not last long in office. He assumed his post with the intention to focus on municipal education, adopting the motto “More Brazil, Less Brasilia,” referring to the country’s capital. Access to higher education is a big issue across the country, as Brazil has lower indexes of secondary schooling compared to its neighbors like Argentina and Chile, for example. However, following a string of controversies — such as suggesting that schools should film students during the singing of the national anthem or that “Not everyone should go to university” — and failing to produce any significant results, Vélez Rodríguez was dismissed just three months into his tenure.

As his replacement, the president has brought in Abraham Weintraub, an economist and professor at the Federal University of São Paulo. In his first speech, the new minister stated that “it is time to calm the moods” and “respect different opinions.” But despite the initial conciliatory tone, Weintraub did not take long to produce a controversy of his own. On April 30, the minister said that universities with low performance ratings are in “shambles” and would have their federal budgets cut. When questioned about what he understands as a “shambles,” the minister was reported saying: “Landless Workers’ Movement [a social group which advocates for agrarian reform], inside the campuses, people naked inside the campuses.”

Initially, the 30% budget freeze affected three of the most prominent federal universities: the University of Brasilia (UnB), Bahia Federal University (UFBA) and Fluminense Federal University (UFF). The minister has said that it is essential to focus on academic publications and rankings. However, according to The Times World University Rankings, UnB and UFBA have improved their performance compared to the previous year, and UFF has maintained the same position. The rankings by Brazil’s leading newspaper, the Folha de São Paolo, shows the three institutions cited by the minister are among the 20 best universities in the country since 2012. Based on these controversial criteria, within two days of the initial announcement the cuts were extended to all government funded higher education institutions in Brazil: 69 federal universities and 39 federal institutes. The minister of education was called to the parliament to explain the cuts, stating that “the priority is preschool, elementary school and technical school.” However, federal institutes, of which Brazil has some 640 and which offer mainly technical courses, were also affected by the measure.

The reduction of $1.8 billion corresponds to 3.4% of the total budget, but considering only the discretionary costs, universities will have around 30% less money for expenses like water, electricity, internet and other services. Weintraub has clarified that the measure did not constitute a cut, but rather a budget freeze. According to the minister, the institutions could receive the full amount if the government financial accounts improve.

Weintraub has blamed previous administrations, calling them “a disaster,” and has linked a possible reversion on the freezing of the public pension reform, which the opposition called a “blackmail tactic.”

The announcement was received with fear from the Brazilian educational community, primarily because in the last four years, the amount invested in the sector has fallen by 54%. During the tenure of Presidents Dilma Rousseff and Michel Temer, there have also been cuts, especially in 2015, when Rousseff slashed R$9.4 billion (around $2.3 billion) from the education budget. Based on the current and previous cuts, the deans of federal universities and institutes affirm that there is no way to further decrease the expenses. Some institutions like IFES, UFPE, IFPI, UFPel, among others, say they have enough money to operate until October.

On May 15, tens of thousands took to the streets of more than 200 cities around the country, protesting against the cuts. The country has not seen national demonstrations on this scale since the 2016 impeachment protests against Rousseff. Bolsonaro predictably did not react well to the first wave of mass protest against him, calling the demonstrators “useful idiots” and “imbeciles.”

The president went on to defend the cuts as necessary, given that his government is making a broader effort to decrease public expenses. In the last weeks, Bolsonaro has shared on Twitter his intention to cut public funding to sociology and philosophy courses. The postgraduate research agency, Capes, also declared a suspension of new grants and fellowships to masters and PhD students.

Additionally to the cuts, Bolsonaro has been one of the biggest supporters of the School Without Party — a conservative movement aimed against what it considers the spreading left-leaning thinking in schools and universities. Educators, on the other side, consider the initiative as censorship and an attempt to pit students against teachers. Due to its controversial nature, the project, which has been put to the country’s parliament as a policy proposal in 2015, has been abandoned. However, the government rhetoric, combined with its latest actions, creates an impression that education and those who provide it are enemies of the Bolsonaro administration.

A War Without Winners

These contentious education reforms will without doubt contribute to a further slide in Bolsonaro’s popularity. In March, he had the lowest approval ratings for the first three months in office for a newly elected president since the mid-1990s. More than that, the freezing of the education budget has brought condemnation from some of Bolsonaro’s allies, like the deputy of Ceará state, Wagner Gomes. The proposals have met with widespread criticism. First of all, federal universities have budget autonomy mandated by the Brazilian Constitution. It is a fact that Brazil needs to improve education, whether primary, secondary or higher. Some of Bolsonaro’s ideas on education do have supporters, like linking public investments to performance to boost achievements. Even though controversial, the approach to prioritizing elementary school to the detriment of higher education also has many defenders.

It is true that previous presidents have also made cuts or frozen education budgets. However, cutting funding and creating an open war with public institutions, which are responsible for 95% of all research in the country, doesn’t seem a right way to improve the education system.

In the midst of such attacks and decreasing investment, millions of Brazilian students are concerned about the effects of this political wrangling. The messages coming from the president and minister of education do not currently raise hope among the education community.

The protests were subsidized by students and education associations. Although there were leftists flags during the demonstrations — a fact exploited by Bolsonaro and his supporters — the majority of the crowd was not connected to any political parties. If there is an ideologically proximity between the education sector and the left, the strike movements faced by former leftists presidents Lula da Silva in 2005 and 2006, and Dilma Rousseff in 2012, show that the affinity it is not as strong as Bolsonaro makes it out to be.

The Bolsonaro government has upheld the cuts, even given the protests and internal dissatisfaction. For both the students and educators across Brazil, the scenario so far suggests hard days ahead. 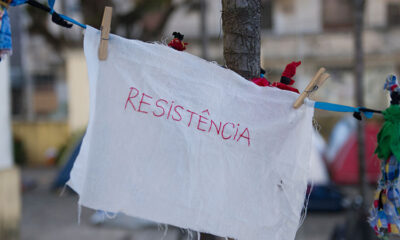