Economic malaise is pushing Brazilians toward outsider parties in the run-up to the October general election.

Brazil has rarely had it so bad. As the 2000s boom in commodity prices waned, the country’s gross domestic product plummeted. Unemployment reached some 12% this year, and there are no signs of an economic recovery anytime soon. The economic downturn has exposed the appalling state of public services. Infant mortality is on the rise after decades of steady decline. Brazil’s education system keeps falling behind in international rankings. These days, depressing news abounds: According to official statistics, half the population lacks basic sanitation, 35 million have no access to safe water sources, and a wave of crime and violence in the country’s largest cities seems unstoppable.

The general election to be held in October is viewed by local analysts as a turning point for the country’s embattled political class. So far no one can offer a reliable prediction of the outcome, but anti-establishment political groups have been gaining ground, offering easy solutions to a litany of complex political and economic ills that plague the country. The current frontrunner in the polls is retired army captain, Jair Bolsonaro. Some of his more controversial proposals include ending restrictions on gun purchases and changing the law to protect officers accused of police brutality. If current polls are any indication, Brazil may very well become the next major country to be ruled by a populist leader.

Brazil’s presidential race became even more complex when Bolsonaro was stabbed in the abdomen during a campaign rally on September 6. There is every indication that he will make a full recovery, but it is unlikely that he will be able to resume campaigning before the first round of voting on October 7. This incident highlights how the deterioration of the quality of Brazilian democracy is driving radicalization of significant parts of the electorate. Bolsonaro’s popularity is itself a product of this trend, as many voters no longer believe that traditional political elites can deliver meaningful change.

Brazil’s political scene has not always looked so bleak. In fact, in the long period between 1995 and 2010, Brazil underwent a virtuous cycle that many see as a kind of silent revolution. Moderate presidents, Fernando Henrique Cardoso and Luiz Inácio Lula da Silva, managed to rein in inflation, make the economy grow and lift millions out of poverty. Even if the rules of the game were as bad as they are now, they managed to produce some good governance that benefited the majority of Brazilians.

But for the few past years, Brazil’s political and economic outlook has taken a turn for the worse. In 2014, a team of federal prosecutors uncovered a scheme in which large construction conglomerates colluded with political leaders to generate kickbacks worth billions of dollars. As the evidence piled up, it became clear that fraudulent contracts between state-owned enterprises and private conglomerates had become common practice, and virtually every political party in congress used them to raise dirty campaign funds.

Further investigation has shown how the proceeds from these schemes helped enrich a small group of well-connected business people and fund corrupt political machines that rely on vote-buying, clientelism and patronage to mobilize voters in the poorest parts of the country.

With the news filled with corruption scandals and many traditional political figures in jail or on trial, including former President Lula, the field is now left wide open to populists and opportunists. On the surface, the country’s democratic institutions are robust. On the plus side, Brazilians now enjoy political liberties unprecedented in the country’s history. For the first time, all adult citizens are guaranteed the right to vote. Freedom of expression is also guaranteed and the press is free to denounce corruption and incompetence. The threat of military coups — once a recurring theme in Brazilian history — is now a thing of the past.

But Brazilian democracy still has deep flaws. Accountability ties that link elected officials and voters are weakened by an ill-conceived electoral system, and special interest groups are usually able to control large chunks of the government’s budget to the detriment of the interests of the majority of voters. This is reflected by the Bertelsmann Stiftung’s Transformation Index (BTI), which gave the country a democracy status of 7.7 points out of 10 in 2018, its lowest in 10 years. Similarly, it revealed how the stability of democratic institutions has undergone a decade-long decline.

Brazil is currently at a crossroads. Meaningful change will require new rules that curtail the incentives for members of congress to serve interest groups at the expense of the electorate as a whole. Legislators must be held accountable so that they are forced to provide good governance for the population at large rather than provide benefits for a select few. Transformation will also require top-down changes in campaign finance rules in order to remove big money from politics and impose harsher penalties for officials caught in corruption scandals.

It is unlikely that any of the candidates running this year will be able or willing to pass meaningful reform. As a result, Brazil maybe heading toward another lost decade. 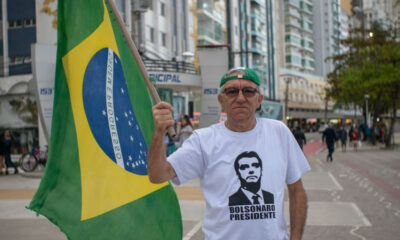