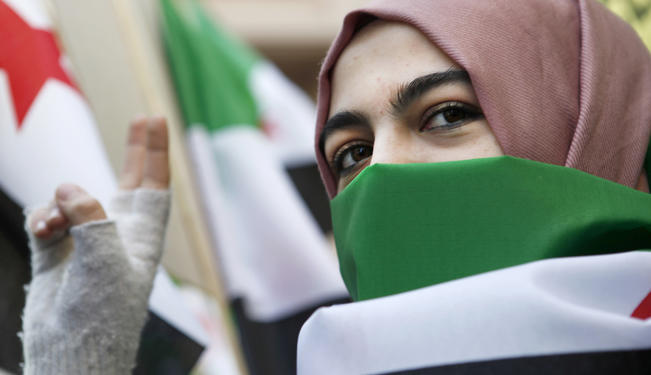 Sex jihad should be taken seriously and demands a thorough investigation. This is the first of a two part series.

Jihad in Islam is the call to fight and go to war and be ready to die for the victory of Islam against the enemy, who is defined as an infidel. The call for Jihad is seen, by some religious scholars, as a higher spiritual value. To die for your religion is seen as an honor and is defined as martyrdom whereby the martyr is guaranteed heaven and all its privileges, including not being seen as dead but as alive in the kingdom of God.

The concept of dying and sacrificing your life for God is more common in most of the major religions than one might think. However, the problem lies in who is defined as an infidel, by whom, and the reasons behind it. If two Muslim groups go to war against one another, each defining the other as an infidel, we face a dilemma: how can both be right?

The dead from both camps could be considered martyrs. I raise this issue to show that l believe the concept of Jihad and the definition of the infidel has been abused by warlords across history in all religions, where innocent followers have been brainwashed and manipulated.

Recently, following the Arab Uprisings, Jihad has taken another serious and shocking deviation, allegedly started by a Saudi sheikh who urged Sunni Muslim women in Iraq to enter Jihad in support of those at war against Shi’ites. Jihad has spread like wildfire since the civil war erupted in Syria; but the idea of Jihad for women has been defined as gravely and fundamentally different from that of men.

When 16 Tunisian women were shipped to Syria, they discovered it was for the purpose of sex slavery. Reports state that they were forced to have intercourse with the members of the Free Syrian Army, the main Syrian opposition group known to the West as “the rebels.”

According to the ruling, “Jihad al-Nikah” – literally Jihad of intercourse – opposition fighters to the Assad regime, who are either single men or married but without access to their wives, can create oral contracts (marriages) with virgins, divorced or widowed women for a short period, for the sole purpose of sexual intercourse.

This period might not exceed an hour, in some cases, and is immediately followed by divorce so that other fighters can have the opportunity of intercourse with the same woman. As such, any one of those 16 Tunisian women could have had intercourse up to 10 times per day. The objective – according to the fatwa – is to encourage the fighters and provide them with their religious and natural right to have intercourse, improving their morale and making them better of the battlefield.

This Jihad al-Nikah does not follow Islamic shari’a, as it denies women the customary and obligatory three-month wait between marriages lest she is pregnant; denies her the right of choice; denies her the public announcement which gives oral marriages legitimacy within society; and, of course, denies her any legal rights as the marriage is not registered.

It also contradicts the real objective of marriage in Islam and all the Abrahamic faiths, which is of procreation — meaning the creation of a family.

Whether this fatwa was really issued from a reliable or official source or not, it quickly spread on social media outlets; reports came back from Syria and the two main Muslim Brotherhood sit-ins in Rabaa Adewaya and Nahda Square in Egypt that it was being welcomed and promoted.

One Facebook page with the name “Veiled sisters against secular and unveiled women” stated: “A woman can’t fight like a man and her contribution is thus limited to Jihad al-Nikah.”

Therefore, the directive is that women must help and perform Jihad by serving the needs of male fighters. They added: “This agreement follows the rules of shari’a” and that no more details could be added on the page.

The Muslim Brotherhood and Jihad al-Nikah

A security source in the Egyptian police revealed that two young women, who were Muslim Brotherhood supporters and who were among those demonstrating in the Rabaa sit-in, had filed reports at the Madinat Nasr police station that they had both been raped under the pretense of Jihad al-Nikah — stating that they had been forced into having sex and had not given their consent. Both were unmarried, aged 26 and 29, and their police report numbers are 1735 and 1736 for the year 2013.

Several weeks later, a new Facebook group called “Ikhwan (MB) without violence” reported that there had been 76 cases of forced sex in the name of Jihad al-Nikah in Rabaa and Nahda in Egypt. This was reported by Hanaa Mohammed, the head of the women’s unit at the new emerging (defecting) group “MB without violence,” in her live interview on Al Arabiya with Mohamed Warawi in his program, “Egyptian Incident.”

In another interview on the Egyptian channel Sada al Balad, Mohammed confirmed the same story. She stated that Mohamed Badie, the Murshid (spiritual leader) of the Muslim Brotherhood, had issued a fatwa to the pro-Muslim Brotherhood sit-ins to allow Jihad al-Nikah. Badie allegedly stated that they were in a period of Jihad, which thus allowed them to establish Nikah contracts during the sit-ins.

Mohammed stated that this Jihad was not only linked to young, Syrian female refugees in Egypt being used as sex slaves, but that it also applied to female members of the Muslim Brotherhood. Mohammed finally confirmed that these contracts were not registered — they specified a duration and time for each contract — and that Jihad intercourse took place in the tents of the sit-ins.

Stories were also reported that several apartments around the sit-ins were rented by the hour, to allow for this Jihad. Women were repeatedly used by several men and stories indicate that it was usually without their consent, especially with younger Syrian refugees.

*[Read the final part on November 2.]