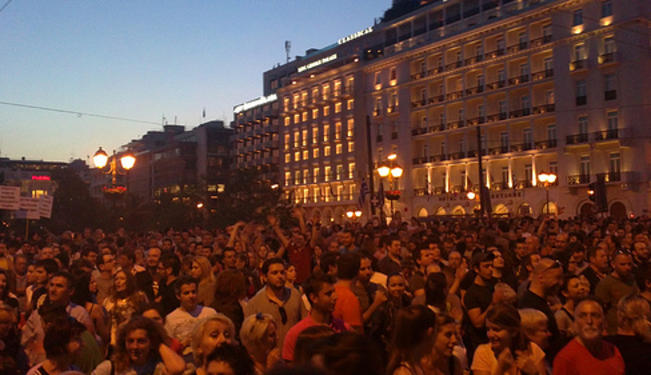 It is time for Greece to evaluate the options before it and choose which path it wishes to take out of the recession.

We read that there is a severe outbreak of anti German feeling in Greece. Under the second EU/IMF bailout, Greece is being lent extra money at interest rates far below those at which it could borrow commercially, and in the meantime a portion of its existing debts are being written off.

However, Germany is being blamed for the unwillingness of the EU and the IMF to sign this second bailout, without, what some Greeks see as humiliatingly detailed assurances that
– The money will be used properly,
– Greece will adopt specified policies to cut back state spending and raise taxes, and that it will liberalise its economy, so that it can grow fast enough to be able to repay the extra money it is now to be lent.

The trouble is that Greece has a poor record in presenting honest accounts, and in implementing in practice, changes it has agreed to in principle. The extra assurances are being sought so that more good money is not poured down a black hole along with the debts that are now being partially written off.

Without this loan, Greece would default and it would leave the eurozone.

In fact, what Germany is really doing is defending the interests of savers, including Greek savers, from what would happen if Greece defaulted and left the euro. If Greece left the euro, its banks would collapse, and Greeks would see their savings, whether in the form of bank deposit accounts, life assurance policies, or claims on pension funds, disappear.

The choice for Greece is between planned austerity and sudden, indiscriminate austerity
Some argue that “austerity” is a mistake, because the cuts in spending and tax increases dampen confidence so much that the economy stops growing. In the short term, this is true. But those who criticise on that basis, have no realistic alternatives to offer.

Where can Greece get the money on better terms than it is getting from the EU/IMF?
Nowhere.

There really is no Keynesian alternative for Greece. The Greek economy is too elderly, too inward-looking and too riddled with restrictive practices, to benefit from a Keynesian stimulus, even if someone could be found to finance it. Greece must modernise first. The EU/IMF program gives it some breathing space (perhaps too little) in which to do that.

Keynesian economics might have been relevant in the 1930s, when the European population was much younger and could respond to an economic stimulus. Europeans today are much older, many are retired, and their priority is saving for their old age, rather than going out shopping in response to a boost in government spending. It is not going to get easier. The age dependency ratio in the EU in 2007 was 25%; by 2050 it will be 50%. What people are looking for now, is stability.

One of Greece’s problems is that it finds it very difficult to reduce wages, which is one of the many things it needs to do if it is to make its exports more competitive. Wage setting is highly regulated in Greece. That is why some favour Greece leaving the euro and allowing devaluation and inflation to cut the real value of Greek wages, and thus regain competitiveness. Inflation is the politically easy way to impose wage cuts, but the effect on living standards is at least as bad as cutting the wage rate, and much harder to control.

However, the price of this inflation/devaluation option would be high. If Greece left the euro, its banks would collapse and the savings of ordinary Greeks, who were patriotic enough to leave their money in Greek banks, would disappear. Inflation is hard to keep in check once it starts, and Greece also lacks big export industries ready to boost exports quickly on the back of a devaluation.

The real political divide… Savers versus borrowers
It is true that current EU policies favour savers over borrowers. This is so because the ECB, unlike the US Federal Reserve and the Bank of England, is not willing to engage in “quantitative easing”, or printing money indiscriminately, to revive the economy temporarily.

ECB refuses to print euros without limit, and refuses to use them to buy Greek bonds without conditions. It refuses to do so because that would lead to inflation, and to a devaluation of the euro. The more euros that are printed the less the euro will be worth. That, of course, might suit borrowers, because the euros they would use to pay back their debts at the end of their loan, would then be worth less, than the euros they borrowed in the first place.

But that approach would be bad for savers, who would see the purchasing power of their savings disappear.

The real political divide in our societies today, is not between Greeks and Germans, or between the profligate Mediterranean nations and the thrifty northerners. It is between savers, who do not want their savings devalued or confiscated, and borrowers, who would like to be allowed to pay back less than they owe.

The losers would include taxpayers, who now own many of the banks, and who would see the value of those banks go down. Other losers would be pension funds and insurance companies who own bank shares, and the people who rely on these pension funds and insurance companies to pay their pensions, or insure them against risk. Yet other losers would be the people who have deposits in banks, who would see the value of those deposits reduced by inflation, and who could even lose those deposits if the bank collapsed.

The challenge we face is that of devising an economic policy that acknowledges that there are ”ordinary” decent people on both sides of this divide.

We also need to acknowledge that no one will be willing to lend any European Governments money any more unless they face up to realities about the cost of ageing societies that will grow steadily across Europe over the next 20 years.

Greeks bashing Germans, or all of us bashing bankers, may give emotional satisfaction, but it will not pay our bills.

We need to think things through, rather than emote. We need to strike a balance between debt relief, and protecting the savings that we need to prepare ourselves for a time when, instead of four, there will be only two people at work, and for every one working person there will be one who is too old to work.

*[This article was originally published by John Bruton's blog on February 18, 2012].