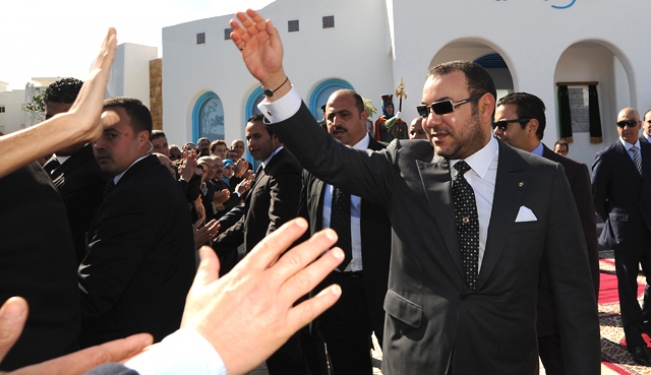 Over the past three months, Arab heads of state have responded to mass protests in their countries by either fleeing or fighting. Egypt’s Mubarak and Tunisia’s Bin Ali promptly surrendered their rule.  In Algeria, Bahrain, Yemen and, most brutally, in Libya, rulers cling to authority with civilian crackdowns. In each case, Arab leaders have ruled out a third option: share power with their people through serious, aggressive reform of the political system. Until recently that is – when Moroccan King Muhammad VI made a stunning speech to his people pledging just that. While his supporters have dubbed the  plan for sweeping constitutional reform “The King’s Revolution”, skeptics doubt  whether his promises will actually materialize.,

The radical Islamist group al-Adl wa ‘l-lhasan, which aims to overthrow the monarchy and establish an Islamist regime, rejected the plan outright. So did a relatively small number of youth protesters.  In light of continuing unrest throughout North Africa and the Middle East, the Moroccan leader’s novel approach merits examining. What has he really offered? What are the chances that he will deliver? What are the implications for the rest of the region? Each question is further complicated by the long-simmering conflict between Algeria and Morocco over the Western Sahara. The tension over that disputed desert land has stymied political and economic progress in both countries for the past three decades – and any serious political initiative by the king must somehow address the Sahara’s future.

The 47-year-old monarch announced his new plan on national television this past Wednesday. Flanked by his brother and son, he called for a new constitution that would reduce his own authority vis-à-vis the elected parliament, affect a separation of powers, enshrine individual liberties, gender equality and human rights, and distribute governance more evenly over the country.  According to the plan, the judiciary, currently under the control of the executive branch, would become an independent power.  An elected prime minister – no longer appointed by the king – would assume control over most aspects of the executive branch of government.  New amendments would make the Berber, mother tongue of Amazigh, an official language alongside Arabic.  Finally, for the first time, regional elected bodies would supersede appointed governors as the principal decision-makers in regional affairs.

The credibility of these commitments may be assessed in three ways: first, in terms of the monarchy’s track record on implementing reform; second, whether the Moroccan people themselves appear to believe the king will make good on his promises; and third, whether the “regionalization” of elected power will apply equally to the Sahara, and what that would mean for the longstanding conflict.

First, as to the track record, since assuming the throne in 1999 King Muhammad VI has indeed made substantial changes in his country’s governance.  He persuaded opposition parties to return from exile and play a robust role in parliamentary politics and government. He built a kingdom-wide network of civil society institutions to foster civic leadership, empower women, and assist the poor. He also created the Arab world’s first-ever truth and reconciliation commission to help redress the people’s grievances against the brutality of his father’s regime.  Though far from ideal, the commission delivered official acknowledgment of the monarchy’s historic brutality as well as compensation to victims for their suffering. The kingdom subsequently won accolades from international human rights organizations for bolstering individual liberties. On the other hand, critics of the king have rightly observed that the past few years have seen a reversal of key reforms, particularly in the wake of the monarchy’s tough counter-terrorist measures. So on balance, the king deserves a passing grade for his track record on reform, even if he did not pass with flying colors.

Second, the Moroccan people’s trust in the king’s proposal appears to be relatively strong.  While some Islamist groups rejected the speech, key members of the elected opposition in parliament have praised it because it addresses their demands for constitutional reform. As for the country’s youth, popular unrest has markedly ebbed in the wake of the king’s address. In Casablanca and Rabat, fewer people are taking to the streets, and there are virtually no calls to oust the king.  This degree of civil peace is unique among the Arab world’s populous countries today.

Third, perhaps the lynchpin of the plan’s credibility and success is the question of the interplay between the proposed political reforms and the Sahara conflict. Since 2007 the Moroccan government has offered autonomy to the people of the Sahara as a compromise to the Algerian demand of a separate Saharan state. As people who follow the Saharan conflict know, a relatively small number of Saharans live in refugee camps on Algerian soil controlled by the Polisario militia, which aspires to control all Saharan territory. But now the king’s reform agenda appears to be overtaking political deliberations with Algeria and the Polisario at the UN. Consider the implication, after all, of the king’s new plan to supersede the authority of appointed governors by empowering elected regional councils.  An elected council in Morocco’s Saharan region would amount, in effect, to Saharan autonomy-with or without a settlement between Morocco, Algeria, and the Polisario. This prospect shows that the king’s new plan poses geopolitical as well as domestic risks to the monarchy.  It will be extremely difficult for the king to take such risks unless a peace settlement with Algeria is achieved at the UN. Such a settlement, in turn, requires American and European support.

The possibility of sweeping reform in Morocco, in any event, also raises the question of broader implications across North Africa and the Middle East. Would the king’s plan provide a new model for autocrats to follow in other countries? Would it raise expectations among Arab youth outside Morocco that their leaders, too, will promise similar reforms?

The answer to these questions will vary dramatically from country to country. In Bahrain, for example, the impact of the Moroccan king’s speech will likely be to embolden protestors to demand similar commitments from their own king.  The same may be true in the kingdom of Jordan.  Nor will the loosening of autocracy in Morocco serve to reduce seething tensions inside military republics such as Algeria, Syria, and Yemen, to say nothing of Libya.  But for heads of state in each of these countries, the Moroccan initiative may also provide a viable alternative to fight or flight.  It is the choice that every leader should make: to harness his formidable powers in the service of his people, whatever the risk, whatever the outcome.