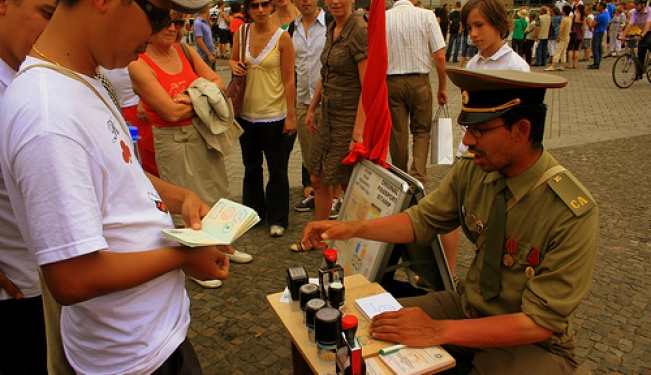 Modern Germany is a melting pot of cultural and genetic roots. Not only can Germany boast of its increasing diversity, but it also promises to finally overcome the barriers that accompany all diversity management.

Germany today is not only the country with more immigrants than any other country in Europe, but even its political elite, across all factions, has a surprising level of diversity. Germany has become surprisingly multi-cultural, spurring a constant and clear decrease of xenophobia since the 1980s despite higher levels of migration. A special form of pride for this new German mix can be noted both in Berlin-Kreuzberg, where Döner Kebap has become the food of choice for a whole new generation, or in the fancy airport of Munich, where a highly international audience happily faces a variety of scripts declaring the Bavarian turf on which they just touched down.

Maybe Germany’s ready integration of diverse peoples is also due to its specific geographical characteristics. It is located in the center of Europe with an unusually large number of shared borders with neighbors, given its size. Germany is also influenced by its political and economic embedment in a European and global ecosystem, and thus relies on integration for its own good.

During the last millennia, the territorial boundaries between the people in European countries have dissolved, with tribes repeatedly intermingling to such a degree, that any kind of German nationalism corresponds to a closed-minded negation of history. “The Germans” can only be seen as the collectivity of people currently living within the borders of “Germany”, independently of their ancestors’ region of origin.

Starting 40,000 years ago, the first “immigrant” from Africa, the homo sapiens came to replace the homo heidelbergensis and settled down, in that time without any concerns about visa regulations or the right of residence. With the rise and decline of the Roman Empire, and on repeated occasions during the Medieval Age, huge masses of people moved in their search for a better place to live. Even if during the Holy Roman Empire (962-1806) and its constantly changing frontiers, the central area of Europe with its German Emperors made an effort (towards the end of this era an increasingly centralistic one) to integrate the variety of tribes, cities and territories, and the flow of people across Europe never came to a real halt. Religion-motivated persecutions (e.g. the Huguenots that left France and often found a new homeland going farther east), plagues, or disastrous wars like the Thirty Years’ War not only frequently reduced populations, but also forced those who survived to flee or make room for new settlers. After Napoleon gave a good shaking to most of Europe, a new sense of nationalism emerged, culminating in the two World Wars. With each defeat and subsequent contraction of the German frontiers, many of the people that had lived on the lost parts of the territory migrated back within the new limits of the country, thus forming until today, one of the major sources of immigration, be it from what now is Poland, the Czech Republic or the countries of the former Soviet Union.

During the decades after 1945, a completely new form of migration underpinned the resurgence of the German economy. So called “guest workers” (implying that the duration of hospitality is limited) were invited to help in manufacturing conveyer belts or to dig deep in Western German coal mines. Based on bilateral migration contracts with the respective countries, hundreds of thousands of these workers from Italy, Spain, Greece and Turkey were received and – different from the initial intention – often came to the country with their families in order to permanently settle down in a new, and economically prosperous, home. Max Frisch described the situation unerringly by pointing out that “They called for workers, and people came”. A decades long discussion about the curse and blessing of the “new Germans” from Southern Europe started and has, by today, discharged into a general debate about the need and (more concretely) the amount and type of needed immigration. While then the main arguments spun around how to react to the sudden though predictable situation, the current discussion tries to focus on how to properly act in order to both tackle the demographic issues that can no longer be denied (the German population holds one of the lowest birth rates globally and would shrink significantly without being compensated by inflows) and the obvious need for a well-qualified workforce whose demand for engineers and IT experts can no longer be satisfied with the national labor supply.

Despite the fact that discussions have now headed towards a much more rational and humanistic way (nobody reckons any more that it’s sensible and fair to ask for young male, qualified workers to join the country, leaving their families behind), many issues remain unanswered, and aspects which could bring the country much further in terms of creativity and efficiency of its labor market, remain untackled. Even if in decline, xenophobia is still a problem, especially in those districts where the local workforce does not feel favored by the economic boom or even by globalization in general. Even if less distinct compared to other countries, there still are quarters where immigrants from the same origin form national clusters without the will and need to get in touch with the rest of society and there still are some unfair disparities and cases of discrimination against immigrants when companies hire their staff, or decide upon salary development and promotions. Even if the direction of the development appears to be the right one, its speed still lacks a certain enthusiasm.

A truly mature shift of the discussion will only be possible once the questions about how to mitigate the challenges of immigration are dealt with, and focus turns instead towards a deliberate use of the manifold advantages it involves. Diversity in organizations, companies and countries, is always more difficult to manage than more homogeneous groups, but its inherent plurality of perspectives, of expertise and experience from different backgrounds contain huge potential for collaborative power which can generate a level of creativity never reachable by groups of the same color and way of thinking. Germany already benefits from highly capable politicians, sportsmen, artists and entrepreneurs with migration-backgrounds such as Cem Özdemir of the Green Party, football star Miroslav Klose, author Wladimir Kaminer and Vural Öger of Öger Tours. And still the question remains: When will German society really stop enjoying only the culinary variety of its immigrants and start daring to discover the full potential of integrating its new fellows into an open society that is rich in diversity and a wealthy role model for other states?