Greece’s economy has not recovered in spite of government efforts to implement austerity measures in the last two years, causing dysfunction in the political sphere in Greece and across the world.

As Greece prepares for new elections, it contemplates its possible exit from the euro zone.  The potential decision to leave has not only been brought on by the country’s political dysfunction, but also by the downfall of its economy.  The country is currently in the midst of one of its worst financial crises since 1974 when the government moved from military rule to a democracy.  In 2011, Greece’s public debt-to-GDP ratio was a 165.3%, the highest in the EU. Further, its overall unemployment rate has skyrocketed to over 21% and is over 50% for youth. This economic crisis led to Greece accepting a number of austerity measures in 2010 in exchange for a €110bn loan to decrease its national debt. While the national debt has gone down, the brutality of the austerity measures have negatively impacted the country, causing it to fall deeper into recession. In February 2012 Greece was offered a second bail out of €130bn in exchange for additional austerity measures.  While it is bad enough that the austerity measures would likely keep the country in recession for at least another year, what is worse is that the bailout may still be insufficient to prevent Greece from defaulting on its national debt.  Further, in an attempt to meet the demands imposed by the measures, Greece had to make several scheduled debt swaps that resulted in the country’s credit rating falling from a C to RD. These austerity measures associated with the bailouts as well as the downfall of the economy led to several protests between 2010 and 2012 that included injury to over 100 police officers and dozens of citizens, and damage to property. Without additional bailout money, which requires acceptance of the austerity measures, Greece will likely default on its national debt and may be forced to leave the euro zone.

Why the Greek crisis is important

The effects of Greece’s economic downturn are being felt not only in Europe, but also across the global stage. In particular, the countries that use the euro as their currency are being heavily impacted by Greece’s financial woes.  This past weekend, members of the world’s eight largest economies met to discuss ways to keep Europe’s financial crisis from spiraling out of control and dragging with it the economies of other countries such as the US, which have slowly started to make positive economic gains. While there is talk that a decision by Greece to leave the euro zone would have less of an impact on the European countries now than was predicted two years ago when the country accepted it first bailout and set of austerity measures, it is clear that Europe, and the rest of the world, will not go unscathed if Greece decides to drop the euro and defaults on its national debt. It has been predicted that investors will sell European assets, making it more difficult for people to obtain credit. It will also be harder for other economically unstable countries, such as Spain, Portugal, and Ireland, to pull themselves out of recession. Because of globalization, countries are interconnected to one another and the downfall of one economy could heavily impact others. 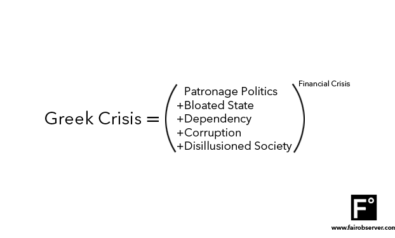 A Failed Greek State and a Disillusioned Society 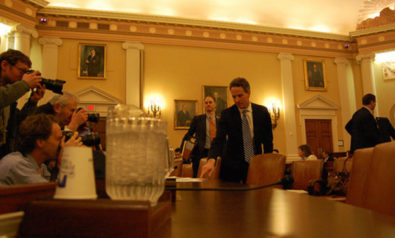