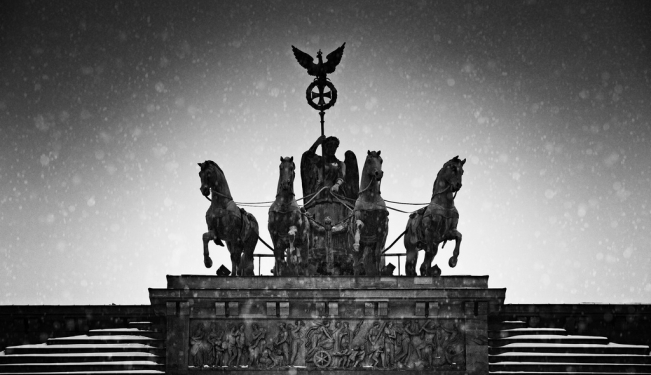 As long as there have been Germans, and outsiders to observe them, there have been variations of the German Question. The Romans viewed the oddly dressed barbarians on the other side of the Rhine and Limes, destroyers of the legions of Varus in the Teutoberg Forest, with a combination of fear and admiration. Tacitus turned the barbarian stereotype on its head and used the allegedly more honest, forthright, and down-to-earth Germans as a foil for his critique of decadent Rome. Generations of observers since have used the Germans as a model and a warning: embodiments of organization, hard work, and potentially frightening belligerence. The Germans themselves also wrestled with the question of whether the destiny of Germany was to be the savior of or the counterpoint to the West. By the time Rome fell, the German tribes began to adopt the religious and cultural practices of the empire—first as mercenary defenders of the borders they once threatened, and eventually claiming for their leaders the titles of Roman emperors and leading the charge against new barbarians such as the Magyars. In a classic and not terribly flattering image, British historian A. J. P. Taylor portrayed the Germans with two faces: one, anxiously and insecurely facing West, sought to live up to the ideals and culture of their more advanced Western neighbors; the other, facing East with a sneer of cold command, sought to subjugate the “inferior” Slavs in the name of western civilization.

Centuries of political division and internal strife, culminating in the failed democratic revolution of 1848 and the ultimate unification of most of Germany “from above” through the combination of Prussian arms and Bismarckian Realpolitik, made the German lands the center of most European politics through the early modern period and 19th Century, but did not resolve the German question. Some confident German intellectuals at the turn of the 20th Century (including, for a time, Thomas Mann) drew a distinction between shallow, materialistic Enlightenment civilization and a deeper, more thoughtful and genuine German Kultur, while Germany’s growing wealth and power increased friction with Britain and France. Continuing ambivalence on both sides fed further conflict. The German empire after 1871 ultimately was not the sated power that Bismarck promised, but an anxious and aggressive society unsure of its place in Europe and eager for dominance over its Eastern neighbors. German policy became the source—if not direct cause—of the two world wars that devastated Europe in the first half of the 20th Century and left lasting moral as well as material scars on the Western Culture the Germans claimed to support. The terrible crimes of the Holocaust were the macabre culmination of Germany’s conflicted identity, marrying the most advanced technical and industrial advances of the modern world with catastrophic violence that exceeded the most barbaric crimes of previous centuries.

The Cold War brought a paradoxical result for the Germans and their neighbors. National division initially elevated the German Question to central status in the conflict between East and West. The apparent immobility of the two blocs, especially after the construction of the Berlin Wall in 1961, however, eventually led to an uneasy but generally accepted status quo. Integration into the West, embodied in both NATO and the European Community, gave the Federal Republic of Germany a new form of legitimacy. Bonn proved to be much more successful than Weimar in offering a foundation for a stable and prosperous democracy that no German state had ever enjoyed. Westbindung served the overall purpose of keeping “the Americans in, the Russians out, and the Germans down,” as someone once described the purpose of NATO as being. The success of the Federal Republic both advanced and reinforced the prosperity and stability of the West. While the West Germans enjoyed all the benefits of their Economic Miracle, East Germans had to content themselves with the dubious distinction of living in the most prosperous state in the Eastern bloc, and chafed under decades of shortages, sclerotic leadership and political surveillance. Since no one actually expected the situation to change, however, the German question gradually faded from the international agenda, and was rarely brought up even within Germany by anyone who wanted to avoid being tarred with the brush of being a revisionist Cold Warrior.

Then came the revolutionary year of 1989, and with it the unforeseen collapse of communism. In astonishingly short order, the German Question returned to the international agenda and received its apparent answer. By 3 October 1990, the GDR disappeared, absorbed into the triumphant Federal Republic. For the first time in recorded history, Europe had at its heart a stable, prosperous, anti-militarist and democratic German state.

As any good pessimist knows, however, every silver lining has a cloud. Two decades after the successful resolution of one German question, many German questions remain. Admired for their prosperity and strength in a crisis, the Germans remain the object of dislike and frustration, and the Germans themselves have wrestled uncomfortably with the question of what it means to be a “normal” state. During the era of division, Germans were among the leading voices calling for European integration. Denied traditional nationalism, the Germans embraced the European ideal. At the moment of national reunification, Chancellor Helmut Kohl was at pains to promise that Germany would not back off on their commitment to Europe. The nature of that commitment, however, has been the subject of continuing renegotiation, because of the reality of German wealth and power and the burdens of German history. Whether the debate has been about the ideal role for German diplomacy in global crises, the contribution of German arms to European/Western efforts at peacemaking, or German responsibility to help bail out failing members of the European union in the name of stabilizing the Euro, Germans and their neighbors continue to differ on the proper balance between leveraging and containing German strength. As the current debate on bailouts for Greece and Ireland have shown, the Germans are sometimes guilty of arrogantly criticizing their neighbors for failing to be as smart, diligent and well organized as they imagine themselves to be, and the very strength of the German economy in the crisis has inspired resentment at Germany’s reliance on exports that may actually weaken the economies of less fortunate partners.

Ultimately, for all their success in constructing a successful democracy and rejecting the militarism of previous generations, and despite repeated declarations from within and without that Germany should be a European state and partner like any other, Germany has still not completely escaped its history. This is not to say that the current German state as an institution, or the contemporary German individually, is held responsible for specific actions in the past. Nor is this burden of the past necessarily the product of specific historical complaints. Indeed, what makes this burden especially tenacious, and especially frustrating for the Germans, is that it is not susceptible to reasoned debate and discussion, or even to the very real practical efforts at restitution that German governments have made over the past sixty years. Rather, it rests upon deeply held, unspoken stereotypes, resentments, and fears. German history continues to play the dual role of model and warning, a screen upon which its neighbors project their concerns, a mirror in which the Germans attempt to see themselves.

Contemplating the German question should inspire us to think more deeply about the impact of historical experience on the contemporary world. Contrary to the hopes of many scholars and philosophers, there is no finish line in history, no moment when all questions are answered and retired forever. The challenge for nations as well as individuals is to recognize the need to balance what we think we know with what we see before us, to balance our memories, our hopes, and our fears. The best we can hope for is to manage that challenge in good faith, even if we do not always succeed.  For the Germans, their neighbors, and their partners, that is enough to keep them busy for some time to come.