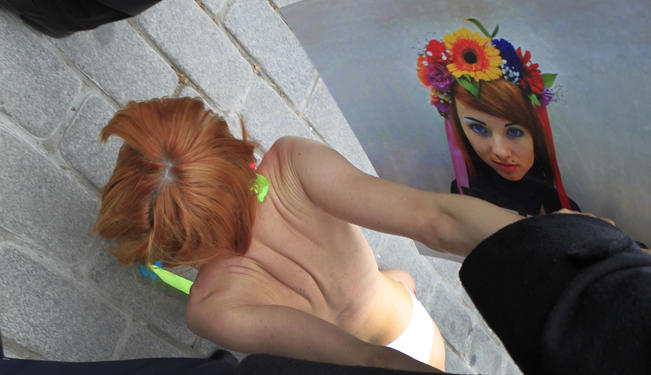 Femen cannot present itself as a feminist, subversive, revolutionary movement.

In a Marxist interpretation of feminism, the way we understand it, feminism is a revolutionary current that not only aims for the liberation of women from patriarchy, but also the liberation of all oppressed people.

Feminism, again, as we understand and wish to practice it, is a transnational, internationalist movement that stands in solidarity with women, workers, and the oppressed throughout the world.

Women's liberation is also intrinsically linked to the struggle against the capitalist system that focuses on the accumulation of profit by a certain class to the detriment of workers. On that note, it is paramount to underline that women are always the first to be hit by the negative effects of neo-liberal policies.

Let us also be very clear on another point: Femen, Amina in Tunisia, or Alia al-Mahdi in Egypt, are not to be vilified for their use of nudity as a means to impact social change. Granted, this is a tactic that is debatable. Many feminists have used nudity in the past as a sign of reclaiming their own bodies from society.

Still, the truth remains that no activist that chooses to use nudity should ever be attacked or threatened. No activist; ever. Under no circumstances. It is the duty of leftist movements to stand behind these women and offer support, regardless of our personal beliefs as to their tactics.

This being said, one of the (many) issues with Femen is their own essentialist and paternalistic brand of feminism. Let us try and break down Femen's rhetoric and actions:

First, Femen's understanding, or lack thereof, of Middle Eastern and North African societies, reveal their Islamophobic tendencies. According to them, all Arab and Muslim (they do not seem to know the difference) men are “waiting behind their wives with knives,” and all Arab women are submissive little lambs.

For a self-proclaimed feminist movement, Femen seems to forget that patriarchy is universal and is not the social fact of certain given societies. Femen is essentializing women just as reactionary groups do. Just like reactionary groups stereotype women from the Middle East and North Africa, Femen does the same, simply applying another set of values and prejudices.

Middle Eastern and North African women could use a little solidarity; that is, movements who take up their agendas and publicize them around the world. What they do not need is cooptation of their struggles to advance Femen's image throughout the world.

If Femen were truly promoting solidarity, they would let women in the region speak for themselves. What they are doing, however, is imposing their brand of feminism.

The words of Femen leader Inna Shevchenko perfectly illustrate the group’s total lack of respect for women. "They say they are against Femen, but we still say we are here for them. They write on their posters that they don't need liberation but in their eyes it's written 'help me.’”

Reading these words, one cannot help but wonder where Femen was during the Arab revolutions. Indeed, women in the Middle East and North Africa have played a leading role in the revolutionary processes in their countries.

To stand in solidarity with these women would have been to help deconstruct the myths and prejudices of Arab women in mainstream western media. Instead, Femen repeats clichés and strengthens discrimination against them, further isolating them from public debate.

Femen is telling women from the Middle East and North Africa what to feel and how to act; but is that not what patriarchy has been doing for millenia?

Apart from staging naked happenings, Femen does not seem to have any kind of vision to rid the world of patriarchy. They also seem to have zero perspective on social justice. Where is their analysis of power relations between economic actors? Where is their will to change political and legal frameworks oppressing women? Without structural changes there can be little emancipation for women. Wearing a beard and announcing an “International Topless Jihad Day” is of little help.

Their only impact is to reinforce the legitimacy of reactionary currents by offending rather than meaningfully reaching out to women, thus making the job of feminists twice as hard.

Femen cannot present itself as a feminist, subversive, revolutionary movement. It is unfortunate that their actions continue to make the headlines, furthering a whole slew of stereotypes, while actual progressive agendas remain in the shadows. As feminists, our aim should be to lash out at all prejudices and all forms of oppression. Anything else, and we are right in the middle of our struggles being coopted.

*[This article was originally published by Al Akhbar English.]