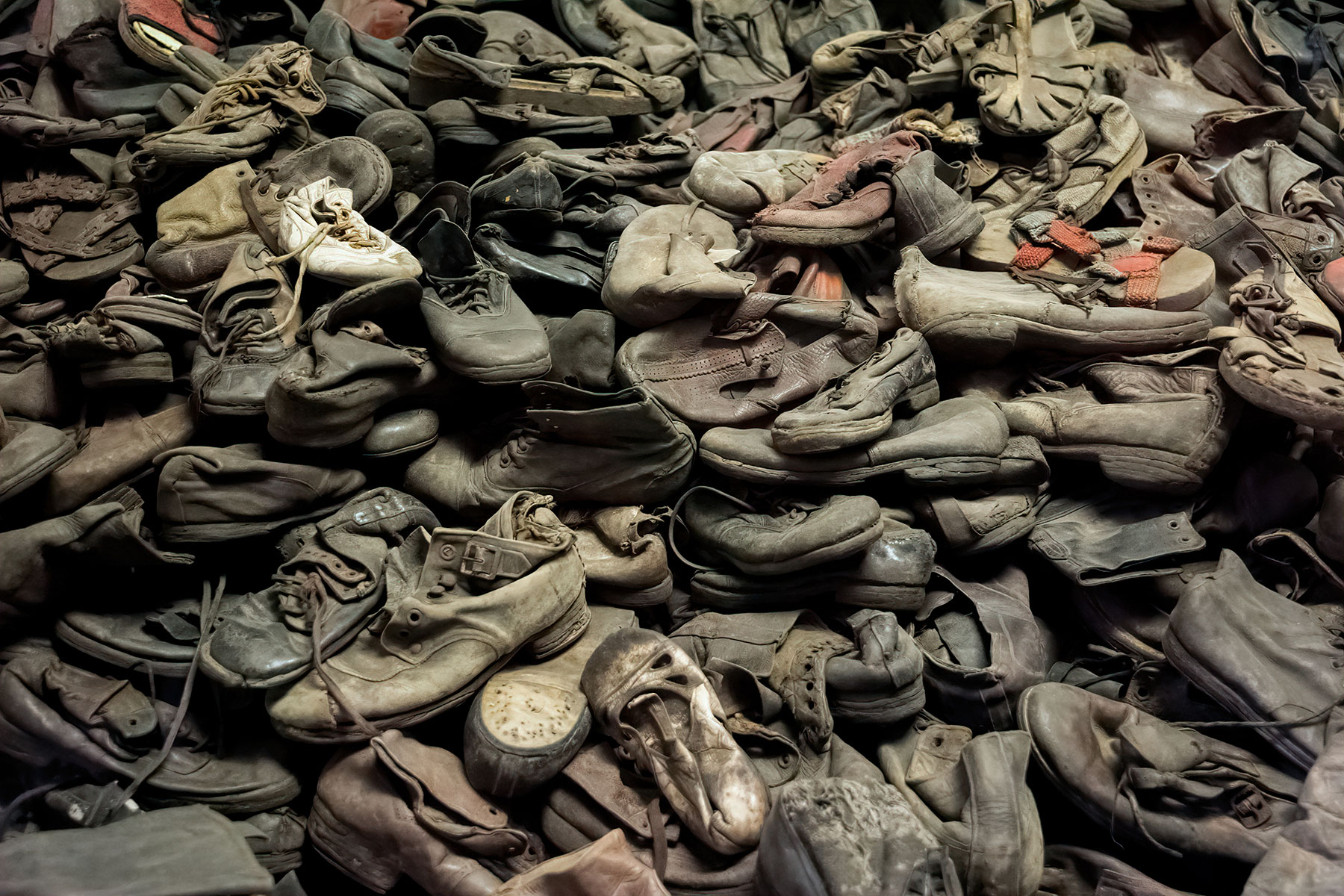 Shoes of Holocaust victims in Auschwitz, Poland on 11/29/2019. © Konoplytska / Shutterstock

In the summer of 2021, genocide scholar Dirk Moses published an article in the Swiss online journal Geschichte der Gegenwart (History of the Present) titled, “The German Catechism.” He argued that Germany’s sense of its special obligation to Jews after the Holocaust has become a debilitating blockage to thinking through some of the most pressing issues of the present.

In Moses’ words, the “catechism” consisted of five strands: 1) the Holocaust is unique because it was the unlimited extermination of Europe’s Jews for the sake of extermination, without the pragmatic considerations that characterize other genocides; 2) it was thus a Zivilisationsbruch (civilizational rupture) and the moral foundation of the nation; 3) Germany has a special responsibility to Jews in Germany and a special loyalty to Israel; 4) anti-Semitism is a distinct prejudice and a distinctly German one — it should not be confused with racism; 5) and anti-Zionism is anti-Semitism.

Moses’ claims, not least his use of the term “catechism” with all of its religious connotations, gave rise to considerable debate in Germany and beyond. (The key texts are now collated on the New Fascism Syllabus website.) Notably, many female scholars, especially women of color, engaged in this debate, which opened a space for a discussion of issues relating to German colonial history, postcolonial approaches to German history and the Holocaust.

But when the discussion took place in the feuilletons of distinguished German-language newspapers, the authors were mainly middle-aged white men. Here, the criticisms, now bound up with the belated German publication of Michael Rothberg’s 2009 book, “Multidirectional Memory,” tended to be more defensive of German memory culture and critical of Moses’ supposed intentions. Left-liberal historians such as Gotz Aly and Dan Diner, who had been instrumental in freeing the federal republic from its self-exculpatory and conservative-nationalist postwar culture, bringing the Holocaust into the center of the national discussion, seemed especially incensed; though this is hardly surprising since these were the very people Moses had in his sights, using an Arendt-inspired tone that seemed designed to enrage.

The “catechism debate” has revealed some intriguing fault lines in the German politics of memory. Moses’ insistence that the terms of his catechism mean that what began as a progressive movement to make Holocaust memory central to the Berlin republic’s self-understanding has gradually become a conservative shutting down of critical voices who want to address German colonialism and current-day racism has touched a nerve. The responses can be read on the New Fascism Syllabus website, where many fair-minded respondents, such as historian Frank Biess, have attempted to grapple honestly with Moses’ claims and to set out what they think their limits are.

Yet the debate is significant not just in its own right, but because it has spilled over into the reception of Moses’ new book, “The Problems of Genocide,” a reception that is itself inseparable from the debate over Rothberg’s book, which turned — contrary to Rothberg’s intention to facilitate open discussion — on the extent to which the Holocaust in German memory culture prevents discussion of German (or wider) colonial atrocities or modern-day racism.

What Does He Say?

What does Moses argue in his book? The clue lies in the subtitle, “Permanent Security and the Language of Transgression.” By this, he signals that his argument is less about the politics of Holocaust memory — though this features in the book — than the way in which the concept of genocide, contrary to the intentions of many lawyers, historians and political theorists, facilitates rather than hinders atrocities and human rights abuses across the world.

Critics, especially Holocaust historians, have been quick to condemn what they regard as a conspiracy theory at the heart of the book, namely that Raphael Lemkin, the Polish-Jewish lawyer who coined the term “genocide” and campaigned all his life to have it incorporated into international law, was a Jewish exclusivist who worked with non-Jewish groups in a way that allowed him to get them to take his concept seriously, but who was only concerned with the fate of the Jews under Nazi rule.

Moses does indeed set out something like this argument, saying that to “mobilise action about Jews … it made strategic sense to link the fate of Jewish and non-Jewish victims of Nazis under a single conceptual umbrella. This is the task that Lemkin’s genocide concept was designed to perform. Far from unthinkingly eliding the differences between Jewish and non-Jewish victims as supposed by Lemkin’s critics decades later, uniting them was the point of the concept.” His conclusion is that “if anyone is to blame for the problems of genocide, it is Lemkin.” In response, Omer Bartov, exemplifying the critical reading of Moses’ book, claimed in an Einstein Forum debate that Moses was putting forward what sounds like a “Jewish–Zionist plot.”

Moses’ reading is debatable. Putting it forward requires dismissing Lemkin’s own autobiographical claims that he was moved, as a child, by learning of the Ottoman Empire’s massacres of Armenians and, more importantly, asserting that Lemkin remained a Jewish Zionist-nationalist from the 1920s — an orientation well documented by James Loeffler — through to the wartime and postwar period. But this is a reading that, albeit contestable, is well within the norms of intellectual history.

Revisionism is what historians do all the time, and there is nothing about Moses’ position that justifies reaching for one’s metaphorical gun. Besides, this is not the heart of the book, which has a far more expansive remit than Lemkin and Holocaust historiography, taking in a remarkable range of references in world history. He has set out his argument plainly and in detail on numerous occasions. (See, for example, his talk with Geoff Eley at the University of Michigan or his interview on the New Books in Genocide Studies website.)

What Does This Mean?

It seems that what is happening here exemplifies Moses’ argument that Holocaust studies is riven by paranoia. Why should seeing the Holocaust as exemplifying the “problems of genocide” — understood in Moses’ terms — mean that one is downplaying the Holocaust? The opposite is the case: The Holocaust should tell us something about the destructive potential of modern states, but it has been siloed in a way that reduces the force of its potential critique, permitting “business as usual” in the modern world. Why, to return to old debates in genocide studies, should placing the Holocaust in a comparative context diminish its significance?

If one were to compare the Holocaust with the Boston Tea Party or the Peterloo Massacre, the critics would be justified in objecting. But analyzing it alongside other horrific occurrences, such as the Armenian, Rwandan or Cambodian genocides or cases of genocide in settler-colonial contexts, not only allows one to understand genocide as a generic phenomenon, but it also throws into sharper relief what distinguishes the Holocaust from other genocides — since none are the same. One can be a responsible Holocaust historian and still subscribe to the idea that motivates genocide studies.

This is a case of fighting the wrong enemy. In the same way that the International Holocaust Remembrance Alliance (IHRA) sometimes seems more concerned about which historians have signed the Jerusalem Declaration on Antisemitism and reinforcing its own singular and narrow definition of anti-Semitism than about combating the radical right, especially as it seeps into mainstream politics in the United States and elsewhere, Moses’ critics have embarked on seeking to have him “canceled” in a kneejerk fear that his critical takedown of the “genocide” concept paves the way to anti-Semitism and Holocaust denial.

What Dirk Moses is seeking to do is to show how the idea of genocide has had opposite effects to those intended, if not by Raphael Lemkin, then by his followers today. He is hardly proposing a world of anarchy or an opening the floodgates to scholarly anti-Semitism. One does not have to agree with everything that Moses says to accept that this is a serious book. Dismissing it as anti-Semitic is nothing more than paranoia in action.