Theresa May’s Brexit action plan won’t find favor with either the EU or her own party, and she faces tough times ahead in negotiations.

Britain’s attempt this week to lay out a plan for it to leave the European Union on March 29, 2019, didn’t go smoothly. Ahead of the release on July 12 of a white paper detailing Britain’s Brexit agenda, two of Theresa May’s ministers quit, threatening the survival of her government. Then, a visiting Donald Trump all but killed Britain’s hopes for a trade deal with the US. In an interview with The Sun newspaper, he said, “If they do a deal like that, we would be dealing with the European Union instead of dealing with the UK, so it will probably kill the deal.” (On July 13, Trump then contradicted himself during a press conference with May, where he said the two countries could work out a “great” trade deal following Brexit.)

Britain has proposed a “free trade area” for goods that would avoid customs and regulatory checks at the border; a “common rule book” for agricultural and other goods; the phased introduction of a “facilitated customs arrangement” to avoid customs checks; and “reciprocal commitments” to allow UK and EU businesses to operate freely in each other’s territories. According to the government, the plan respects the decision of British citizens in the June 2016 referendum “to take back control of the UK’s laws, borders and money,” while avoiding a “hard border” between Northern Ireland and Ireland.

The hard part comes next. “This is the end of the beginning of the Brexit process,” said Joao Gomes, Wharton finance professor, quoting Winston Churchill. “Now it comes to the reality of actually negotiating — the politics has to be set aside. The negotiations … are going to be really tough. I think May is still not coming to grips with what the reality of negotiating with the EU is going to look like. I don’t think this plan is anywhere near what the final deal is going to look like.”

According to R. Daniel Kelemen, Rutgers University political science professor and director of the university’s Center for European Studies, “The basic and fundamental tradeoffs” that the UK has to face include that of “having more autonomy in policymaking, and more capacity for the UK in the future to diverge in its regulations and policies versus access to the EU single market.”

At the same time, “the more you want to maintain the [UK’s] access to the single market … the more you’re going to have to follow EU rules,” said Kelemen. “But what the Brexiteers always have promised was this delusion that you could have just as much access to this [market] — which is the biggest economic market in the world. [They promised that the UK could] maintain that access while not having to follow the regulations and rules of the EU single market, to be able to diverge, and to be able to do [its] own trade deals.”

The EU’s chief Brexit negotiator, Michel Barnier, said EU member states would analyze the white paper and provide a detailed response next week. However, critics did not expect the EU to agree to the terms if they perceive Britain as wanting to retain the advantages of a common market without paying the attendant costs.

Michelle Egan, professor at the American University School of International Service and a global fellow at the Wilson Center, noted that naysayers have argued that “no deal is better than a bad deal.” Yet she saw hope in Barnier’s comments that “80% of the negotiations on Brexit have already been agreed to.” She noted that the remaining 20% represents the “real hard tough nuts to crack.” Gomes, Kelemen and Egan discussed the emerging Brexit situation on the Knowledge@Wharton show on Wharton Business Radio on SiriusXM channel 111.

Critics, including Trump, have described the white paper’s proposals as “a bad deal for Britain” with a “soft” Brexit strategy that allows the EU a role in determining standards for food and goods, and a role for the European Court of Justice in interpreting rules in disputes. While the white paper talks of plans for free movement of skilled workers and students after Brexit, skeptics fear that by the time a deal is hammered out with the EU, Britain may end up making additional concessions on immigration.

The resignations of May’s cabinet members David Davis and Boris Johnson over the prime minister’s “soft” Brexit approach “is just a reflection of fantasy or delusion running up against reality,” said Kelemen. “They didn’t present a workable plan [as an alternative]. They wanted a fantasy version of Brexit which the EU would have never agreed to, which is kind of having all the benefits of single market access without the obligations, or the have-your-cake-and-eat-it-too option.”

In her foreword to the white paper, May insists that her government is complying with the Brexit referendum verdict. “And that is what we will do — leaving the Single Market and the Customs Union, ending free movement and the jurisdiction of the European Court of Justice in this country, leaving the Common Agricultural Policy and the Common Fisheries Policy, and ending the days of sending vast sums of money to the EU every year,” she stated.

However, it is apparent in the proposals that the UK has too much of its fortunes tied to the EU to break free. For example, one proposal for a free trade area says: “This free trade area would protect the uniquely integrated supply chains and ‘just-in-time’ processes that have developed across the UK and the EU over the last 40 years, and the jobs and livelihoods dependent on them, ensuring businesses on both sides can continue operating through their current value and supply chains.”

As The Guardian newspaper columnist Martin Kettle wrote, “The 98-page document does capture the moment when the government finally and formally admitted to the British public that our future relationship with the EU is supremely vital to the nation’s economy, prosperity and security. So vital, in fact, that it must take priority over all the unilateralist fantasies about what Brexit might have involved.”

“The EU’s hand is extremely strong,” said Gomes, citing Johnson’s resignation letter where he says, “It is as though we are sending our vanguard into battle with the white flags fluttering above them.” Gomes described as “utterly inept” the UK foreign policy over the past two years. “Their bargaining power at this point is zero. The EU knows that. They have not been able to separate the EU in different blocs, which would be easy to do — to get a French bloc, a Polish bloc, a German bloc. They have not been able to be singularly united.”

Gomes said the only option for the UK now is to strike “a cosmetic agreement, but the EU is not going to budge.”

Kelemen dismissed the idea that no deal is better than a bad deal. “I find it totally non-plausible,” he said. “For instance, in a strict reading of what no deal would mean, then quite literally planes could not fly from the UK to the EU if they didn’t reach at least a side deal on aviation, because the whole regulatory structure governing aviation safety is governed by EU rules. They couldn’t get some of the [medicines] they need for cancer treatments that are governed [by EU rules]. You could go through all the different sectors where no deal would be a disaster.”

Kelemen agreed with Gomes that the UK has few options. “They’re going to have to take Brexit more or less on the terms the EU is willing to offer if they don’t want an economic disaster.”

A Job Nobody Wants

The three experts agreed that although May faces a threat to her leadership, there is no alternative leader in sight, or anyone who might want to take her job at this stage. “She’s holding the poisoned chalice at this point,” said Gomes. “Nobody’s going to take it away from her unless they’re really dumb.”

“If Theresa May goes, who will replace her?” asked Egan. “Who wants to take on the baggage of this negotiation process at this stage where Britain is really caving in to a lot of demands?”

Meanwhile, the controversy over how Britain is handling the Brexit process has hurt its image, said Gomes. “Everybody in Europe looked up to the UK as the arbiter — that one country they could trust, when you have the grievance with France or Germany. It’s just over, at least for the foreseeable future.”

Meanwhile, public opinion has “almost solidified on both sides,” said Egan, pointing to polls that showed people are “not impressed with the way this government is negotiating on the behalf of the British public.” At the same time, British citizens are not likely to change their referendum mindset and want to remain in the EU, said Kelemen. “Probably most EU leaders … would be happy to see the UK change its mind. [But] I don’t think that’s going to happen.”

Egan saw “the next big crisis” coming up in October, at the European Council meeting, “where Theresa May will need to have a deal to take back to the British Parliament.” The other issue, she added, is the ability of the May government to survive in the face of challenges from hardline Brexiteers who oppose her soft approach to breaking off from the EU.

According to Egan, the largest issue that remains unresolved is how to treat Ireland as an island in matters relating to border controls, market access and the Good Friday Agreement, the 1998 peace accord between the British and Irish governments. Regarding how Ireland would be treated in matters relating to customs checks, Kelemen added: “If you leave the single market, you have to have checks somewhere.”

Playing Constitutional Hardball on Both Sides of the Atlantic 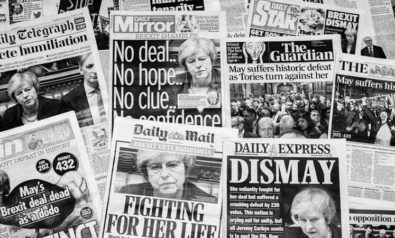 Is Theresa May about to Cry “Mayday”?