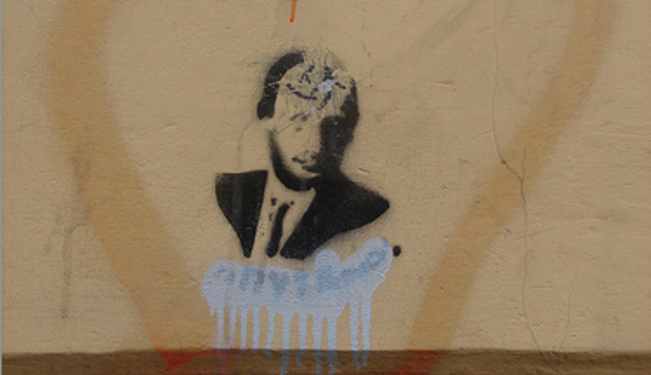 Since early December, Russians have been demonstrating against electoral fraud and have been displaying their anger against Prime Minister Putin. The next presidential election takes place on March 4 and the winner already seems to be obvious. A trip around St. Petersburg, Russia’s cultural capital, shows what Russia’s avant-garde think of the political situation and the solutions they offer.

The Russian art group "Woina" (“war” in Russian) has attracted attention since 2005. They became famous on the night of June 14th 2010. Like every night, the Liteiny drawbridge was raised at 2.30 am so that ships on the Neva could pass. The bridge was also raised that night – but not before five "Woina" activists had, in a span of 23 seconds, splashed white emulsion paint on the bridge. When the bridge was completely opened, a 65-meter-tall penis was seen pointing in the direction of the headquarters of the state secret service, FSB. The message was clear: “FSB, f*** you“. This symbol of resistance went around the world and the popularity of "Woina" grew beyond national borders. In April 2011, the group even won a prize for ‘Innovation’ in the category of Contemporary Art by the Russian Ministry of Culture. This was rather absurd, because the group’s actions on the bridge were clearly meant to humiliate the ruling regime. "Woina" rejected the award, but accepted the prize money of €10,000 and donated it to a human rights organization. It is this radicalism and integrity that makes "Woina" credible for many Russians – and credibility is the greatest value for Russians in this hour.

But "Woina" has nobly refrained from the protests in recent months. The political scientist Elena Belokurova of the European University at St. Petersburg says: "The avant-garde in Russia are powerless – and equally surprised by the fury and anger of the people like all the experts." The mass protests since the recent parliament election were unforeseen. The 38-year-old Belokurova was at the forefront of all demonstrations in St. Petersburg and says that it is not just about changing the political system in Russia. "It is all about, that something happens to the people, because those who went onto the streets are people who want to realize their full potential." Therefore, rather than calling the protests "revolt(s) of the satisfied", as most people do, she prefers to call them a "creative revolution".

The Russian avant-garde are certainly creative, particularly in St. Petersburg. In recent years there are more and more artists in the city, who dare using their art to practice open criticism. Not all are as loud and sensational as “Woina”; the artists’ association “Chto delat” (“What shall we do”), established in 2003, is quite different from “Woina” in terms of their methods.

What should we do?

The author Alexander Skidan was there from the very beginning of the Chto delat movement and wrote in a manifesto which was published in a newspaper: "Theses on the politicization of art". Today, he justifies the original idea as follows: "We all felt like being in an impasse, because contemporary art was also used at that time primarily to legitimize the capital and the status quo of newly rich Russians." For the last two or three years contemporary art in Russia has remained as hip as ever. In St. Petersburg, two private contemporary museums opened in 2010. Dmitry Medvedev once said for good publicity: "It should not be a secret that I love contemporary art." But no one was ever taking about love. After all, the contemporary art center NCCA still needs a separate building in St. Petersburg – and still haven’t have got one till now. The government is content with the world-famous Hermitage and the Russian Museum, and thinks nothing else has to be done in terms of art promotion in St. Petersburg. In reality, however the contemporary art community rumbles beneath the surface and waits to be seen. And so, groups like "Chto delat" with their performances and exhibitions attract young, intellectual crowds over and over again. Skidan and his friends regularly publish essays and analysis on current issues such as immigration and racism. Skidan explains: "For us, it is important that we do not only criticize but also identify alternatives. We make less noise than "Woina", but we offer real solutions.” The 47-year-old poet is the editor of a literary magazine and publishes poetry books. He often quotes Berthold Brecht. He likes being intellectual.

However, he never managed to reach the masses with his political analysis – not even in exciting times like these. Moreover, "Chto delat" is often misunderstood, especially in St. Petersburg, because people tend to believe that politics necessarily has something to do with dirty and vulgar behavior. Alexander Skidan says that the audience would rather see aesthetic and beauty. Politics is very rarely beautiful. The feminists of "Pussy Riot," a young punk band from Moscow, know this well. In January the band’s live performance on the Red Square attracted a lot of attention. In an interview, the band members said that the Red Square is the most important place in the country and that this place should be occupied in order to bring real political change. The "Pussy Riot" occupation only lasted for the duration of their song – "Putin got scared", after which they were arrested by the police and taken away.

For more than a year, the eight band members are fighting radically against Putin’s system, with songs like "Death to prison, freedom to protest". They have quickly become style icons – even though they never take off their red, blue and green knitted storm bonnets. They are present but not available. They have names like Schumacher or Tomcat and speak openly of the "spoiled, ruined Russia". However, in contrast to the hundreds of thousands of demonstrators, they do not show their true colors – and therefore only seem to stand for profound changes.

But if you look at the big picture, the protest of hundreds of thousands for months has certainly made a difference. As Russia's next president, Putin will have to search for more dialogue, especially with his critics. So the protests give people a voice. For a long time the avant-garde expressed their rumbling discontent on people’s behalf. Now the people do it on their o
The views expressed in this article are the author's own and do not necessarily reflect Fair Observer’s editorial policy.