Founded in 2013 in response to the eurozone crisis, the party evolved through various stages, increasingly campaigning on a nativist ticket.

Revolutionary fascists and (nominally) democratic radical-right actors have long told apocalyptic stories of national decline, of the ever-growing threat of the demise of the nation through decadence and cultural/ethnic “pollution.” These stories, however, do rarely end with catastrophe, but ultimately promise the nation’s rebirth, like a phoenix from the ashes.

To be sure, such myths come in various shapes. As such, this is not to claim that contemporary radical-right parties are commonly revolutionary — as in Roger Griffin’s seminal 1933 conceptualization of the palingenetic myth — but, rather, the way these actors selectively arrange events is built around a tragic fall followed by a liberating rebirth, a “happy ending.” It is this imagined ending which offers feelings of relief and satisfaction to those accepting these stories. Besides many other factors, for instance, disenchantment toward present day politics, such stories are arguably one of the reasons for attracting supporters.

This pattern is visible in the rise of Alternative for Germany (AfD) party, through which radical-right positions on migrants and Germany’s history have eventually gained voice in the country’s parliaments. Founded in 2013 in response to the eurozone crisis, the party evolved through various stages, increasingly campaigning on a nativist ticket, and entered the German federal parliament in 2017. And while it is important not to lose sight of the background against which this was possible — relatively strong anti-democratic, authoritarian and racist attitudes, violent racist attacks and radical-right tropes circulating in the mainstream — the focus here is on the AfD’s evolution and its use of the myth of national rebirth.

The party’s development can be roughly divided into three stages, from a rather neoliberal beginning to a predominantly nativist position, from economic concerns to “a cultural catastrophe has arrived.” The party alleges that only “the people,” their supposedly homogeneous “will” being represented by the AfD, can guarantee cultural/racial purity, national survival and rebirth against the liberal agenda of “the political elite.”

In the beginning, a (neo)liberal “German interest” enabled the rejection of an elite-driven European project, calling for a politics of national sovereignty. This was uttered in the context of debating the state of European integration; the party’s founding member and then co-leader Bernd Lucke claimed that “the solution to the European crisis lies not in ‘more Europe,’ but in more democracy, more responsibility, and more subsidiarity. Germany shall have the courage to also emphatically pursue its own legitimate interests.” During this period, “the German people” remained relatively open, not simply defined in (neo)racist terms, while the party positioned itself as the only political alternative, speaking out for “us” against past and present (mainly economic) wrongdoing by a morally inferior political elite.

Following Frauke Petry’s ascent to leadership of the party in May 2015, within the context of the refugee crisis and the simultaneous discussion about Germany’s Willkommenskultur (welcome culture), heated debates over immigration and cultural issues became increasingly central in the wider public and party. As such, in this middle period, prominent neoliberals, such as the former IBM Germany CEO Hans-Olaf Henkel (who would ultimately announce his resignation), distanced themselves from the “new” AfD, due to ever more present neoracist claims.

Such positions have been pushed by the increasingly influential internal organization Der Flügel (the wing), built around people like Björn Höcke and the Erfurter Resolution. For example, at a symposium organized by the new-right Institut für Staatspolitik, Höcke spoke about the different mating behaviors of Africans and Europeans, claiming that “as long as Germany eagerly welcomes those people, the reproduction strategy of Africans will not change … The nations of Africa, they need the German border, they need the European border in order to find a way to a sustainable population development.”

Höcke furthermore questioned Germany’s relatively self-critical remembrance of the Holocaust in January 2017. Referring to the Holocaust memorial in Berlin, he stated that “We Germans … are the only people in the world which planted a memorial of shame in the heart of its capital,” and demanded “a memory-political 180 degrees turn.” Hence, between May 2015 and the federal election campaign in 2017 (a phase in which the AfD entered 13 state parliaments), the AfD evolved from a largely neoliberal to a radical-right party.

The party’s 2017 national election campaign further strengthened the promise of national rebirth for native Germans to its storyline, highlighting the party’s role as a rescuer of an endangered (ethno)nation, thus promising a “happy ending.” This was already visible with the party’s main campaign slogan, which demanded “Trau dich Deutschland!” (Have Courage Germany!). Note the relevance of the female body as a site for radical-right politics presupposing that a better, happy future could be achieved with the AfD, through casting off a yoke kept in place by “the elite.”

Opposition to ethnic and religious diversity concerning “cultures” allegedly incompatible with “our” own have been at the heart of the AfD’s agenda, and the “threat of Islam” features in the party election manifesto: Islam “spread[s] and the presence of over five million Muslims, a number which steadily grows” is viewed “as a great threat for our state, our society and our value order.” In the party’s program, the “ideology of multiculturalism” is furthermore rejected as a “serious threat to social peace and the survival of the nation as a cultural unit” (italics added). As such, the “liberal” celebration of diversity is portrayed as a threat of cultural and even ethnic “pollution.”

Our Country Is at Stake

Consequently, the AfD agitates for national rebirth through the (ethnic/racial) community’s liberation of “the people” from “liberal” rule and the “pollution” it causes, most manifestly present in the “illegal” opening of borders by “political elites” during the refugee crisis. Eventually, narrating the myth of national rebirth was welcomed by significant and disenchanted parts of the electorate as the AfD entered the federal parliament following the 2017 general election. Immediately after the votes were cast, Petry left the party that had, according to her, drifted too far to the right; in fact, she had long lost her dominant position with the party.

As if to prove the AfD’s trajectory, Alexander Gauland, the party’s leading politician, stated in June 2018 that Germany’s 12-year period of national socialism resembles only a “bird shit” when situated within more than 1,000 years of German history.

Recently, Gauland defended radical-right riots in Chemnitz as “normal” as protesters marched through the town shouting “Foreigners out!” and attacked people they recognized as Muslims or refugees. Similarly, Marcus Frohnmaier, an AfD member of the Bundestag, tweeted that if the state is not able to guarantee the safety of the people, the latter have to “take to the street and protect themselves … [so to stop] ‘knife migration.”’ And Höcke has called for a silent march to remember “all those who died because of forced multiculturalization in Germany,” proclaiming that “Our country is at stake. We do not forget.” As such, the AfD continues to foreground the nation and its rebirth. 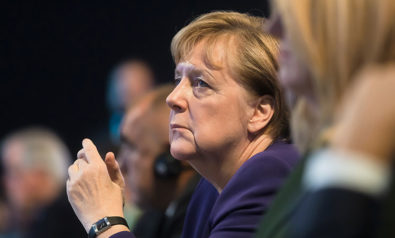