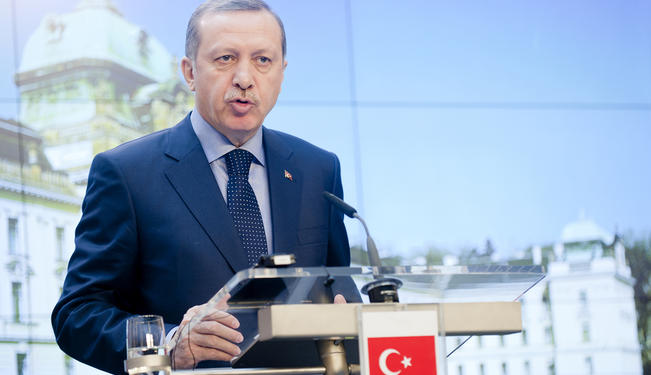 Realizing its past mistakes, Turkey could become an easier foreign policy partner.

Even the supporters of Turkey’s ruling Justice and Development Party (AKP) are disappointed with the results from Ahmet Davutoglu’s foreign policy. Only 53 percent of AKP voters agree with his Syria policy; in total, 56 percent of Turks are opposed to it. However, not only with regards to Syria, Turkey’s overall foreign policy has hit the brick wall. There has only been very little progress in other areas as well: whether it is Cyprus, Greece, or Armenia – none of Turkey’s “old” problems with its non-Muslim neighbors have been resolved.

Moreover, relations with Muslim neighbors Iran and Iraq – with the exception of Kurdish northern Iraq – as well as Egypt are tense. In the Israeli-Palestinian conflict, the AKP has lost its past influence over the involved parties. Neither Israel, nor the PLO or Hamas look to Ankara anymore. Little is left from Turkey’s stance as a regional power.

Even in the US, which until recently saw Recep Tayyip Erdogan and Davutoglu as almost equal partners, Ankara is a factor of secondary importance. One would rather avoid talking about the relations with the European Union (EU).

Nevertheless, there are almost no signs of self-criticism coming from officials in Ankara. In the eyes of Prime Minister Erdogan and his chief foreign policy advisor, Ibrahim Kalin, Turkey today is a lone voice which holds up the principle of democracy in the foreign policy realm. Erdogan accuses the West of doublespeak and Kalin says: “There come moments in history when you are alone on the side of truth in an atmosphere where the world is silent to coups and massacres.”

Erdogan and Kalin claim that the Turkish government’s unconditional solidarity with the Egyptian Muslim Brotherhood and the push for a military strike to topple Bashar al-Assad, are directly related to its commitment for democratic values. Because Turkey is quite isolated in both cases, Kalin now speaks of a “worthy solitude” which draws its value also from the fact that it ultimately shows the right way. Is this only misapprehension or delusion?

Ideological Musings in the Way of Realizing Political Realities

This false sense of security/righteousness stems, to a large extent, from the fact that the AKP's leadership has viewed global political shifts through an ideologically tinted lens, and thus perceived them only one-sidedly. For example, the economic and political weakening of Europe and the US’ waning influence in the Middle East were seen by the AKP as a new chance to establish Turkey as an influential player in the region.

The calculation was that Turkey, as an actor anchored in the Middle East, could effortlessly build on the traditions of the Ottoman Empire. For long, the AKP leadership believed they were chosen to give Turkey’s history a new, ideal direction. The fact that the dissolution of the old order, especially in the Middle East, also carries certain dangers with it – which could make Ankara’s even closer cooperation with Europe and the US necessary – was neglected.

Another example is the global weakening of the nation state. Six months ago, Foreign Minister Davutoglu welcomed overcoming this model in the Middle East. According to him, it was now finally possible to revise the order imposed by the Sykes-Picot Agreement from 1916, which drew Middle Eastern borders conforming with the interests of European imperialists. Ankara felt that it was acting in accordance with the tide of world history and was about projecting strength in the region which was derived from a romantic conception of history.

What these musings completely overlooked, however, were the enormous conflicts which emerge during the disintegration of a state and its institutions. The catastrophes on the territory of former Yugoslavia and the horrible situation in Iraq would have served as solid basis for a sober assessment of the situation and its inherent dangers.

A last example concerns the AKP’s enthusiasm for reviving and strengthening traditional identities. In this situation as well, the ruling party sees itself as acting in accordance with the trend of the time, witnessing an invigoration of indigenous and religious identities at the cost of western and secular orientations everywhere, from China to Africa. In its own country, the AKP has enacted a lot of initiatives to ensure that pious Muslims in Turkey are no longer culturally, economically, and politically marginalized.

However, the struggle against the marginalization of the pious has turned into an open favoritism and privileging of religious identity and morality by the government. The AKP still does not, or does not want to, acknowledge that such policies simultaneously push other groups, especially Kurds and Alevites but also secular forces, to focus on their own culture and thus automatically on the divisive aspects in society. Thus far, the Turkish government has not found the answer to how privileging certain religious and ethnic identities can go together with political equality.

Concerning the weakening of Europe, the crisis of the modern nation state and the revival of indigenous identities, the AKP only saw the upside of things and believed itself to be in unison with global developments. This explains why Ankara saw itself for so long as a regional power and did not react to signals suggesting the opposite – and why it still champions the idea of the “worthy solitude” despite contradicting realities.

However, the government will not insist on the “worthy solitude“ for long. As a matter of fact, Turkey is already carefully backpedaling. It wants to reconnect with Tehran. In another development, Washington’s request to end support for radical groups in Syria did not fall on deaf Turkish ears anymore. Cooperation with Turkey on foreign policy matters could become easier in the future.