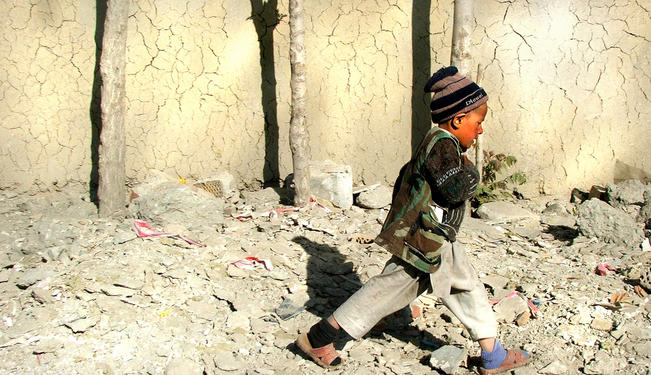 Afghanistan is in need of a sustainable economic development strategy in order to be able to move forward.

It is hardly possible to address the economic situation of Afghanistan without equally considering its security and political situation as this overshadows the social and economic issues of the country.  Having killed Osama Bin Laden in Pakistan, the mission of the Obama administration and the EU in Afghanistan seems to have been accomplished. However, the road toward peace and stability now seems to be bumpier than ever before for the Afghan nation. There has been fear for  the future when the international community will completely withdraw troops (by the end of 2014). The country will be facing not only a security transition, but also a political transition as the presidential election is supposed to be taking place during the same year. The current situation in Afghanistan does not inspire much optimistismfor its citizens and the question: “what will happen when the US and NATO forces leave the country by the end 2014?” pops up in the mind of every individual Afghan as well as many politicians who  are familiar with the Afghan security and political dilemma of the last decade.

Since the US invasion in 2001, Afghanistan has become particularly dependent on foreign aid. According to the World Bank, 90 percent of the government’s budget relies on foreign aid and this has been the case  from the first Bonn conference in 2001 to the second Bonn conference in 2011. Over $60bn dollars has been poured into Afghanistan to  instill peace, security, and sustainable development.  During the recent Tokyo Conference in July 2012, which was specifically titled under the economic development conference for Afghanistan, the international donor community pledged $16bn dollars for Afghanistan to run its government programs and fill its budget deficit for the next four years.   Neither of the conferences brought about promising peace or stability, nor did they offer any viable economic development strategy for the country to maintain a sustainable political and economic infrastructure. Moreover, these billions of dollars have trapped  Afghanistan in  endemic, large scale corruption. The country is still suffering from insecurity, weak governance, insurgency and warlords – all of which are major obstacles towards sustaining the state-building and economic development process.

The problem is twofold: the issues are rooted within the Afghan government on the one hand and in the international community on the other. There is large scale corruption within the Afghan government as well as the international community. More than 50 percent of the allocated development budget is being  allocated for non-development expenditure including salaries and security costs by the implementing partners, mostly international contractors. Furthermore, the Afghan government does not have the capacity or clear and well defined strategic planning to spend the money efficiently. There is no coordination, economic development strategies, or policies within the government and economic sectors to absorb the aid and spend it on long term economic infrastructure programs. On the other hand, more than 80 percent of the aid does not come through the channels of the Afghanistan state structure.In the last decade, most of the projects have been contracted to national and international mafia contractors who have close political links with government officials and international donor agencies. After taking their profit shares, these projects have been in turn contracted to sub-contractors. Often, more than half of the money for these projects and programs is lost in the contract line.

Afghanistan is one of the poorest countries in the world. According to the World Bank, if the international community pulls back their donations along with their troops, the country’s economy will collapse. The question is, when will the international community be generous enough to feed the Afghan government? It would be wise and logical for this generosity to take place with fundamental economic strategies and accountable polices that may enable the Afghan nation as whole to stand on its own feet in the long run, since the funding will eventually have to stop.

Even though Afghanistan is extremely poor, it is blessed with an advantageous geo-political and geo-strategic position. Afghanistan is a vital hub of continental trade routes extending across all directions: India, Southeast Asia, Europe, Russia, the Middle East, and China.Likewise, according to a Pentagon’s recent survey, Afghanistan owns up to 3 trillion dollar deposits of minerals so far.The Hindu Kush Mountains contain various types of minerals, precious stones, oil and gas. Equally, when looking at the agricultural sector, Afghanistan is a highly agriculturally fertilized country.

The strategic location of Afghanistan can be helpful in building its economic infrastructure. Over two millennia, Afghanistan accommodated trade routes to China, India, the Middle East and all around Europe. This specific trade route is famously known as the “Silk Route.” Goods of various assortments were transported by camels and produced great wealth. There is an urgent need to develop transport infrastructure  to link Afghanistan with the rest of the world prior to developing the agriculture system, extracting natural wealth and once again using the area as an important area between the east and west.  The wealth of farm products will remain obsolete unless they are able to reach markets. Minerals, gas and  hydroelectric power will also only prove to be worth their value when they are actually being delivered to paying customers via trucks, railroad, pipelines or electric transmission lines. Without the existence of high-quality transport corridors within Afghanistan and its neighbors, the potential of all these abundant resources to develop Afghanistan’s economy will not be fulfilled.

There is a high demand for products such as gas, oil, hydroelectric power and agriculture goods within Afghanistan and in regional and international markets. Newly industrialized countries like India and China have already showed interest in Afghanistan. The country also recently signed strategic partnerships with India, the UK, and France and some other European countries. Afghanistan also signed an enduring strategic partnership agreement with the United States in May this year. The transport of goods from farms, factories and mines to the world market is the key to the development of Afghanistan’s economy. This will attract international investment to the country, which again will create thousands of jobs for Afghan citizens. The country will depend on its own income once the government is able to take  advantage of tariffs and taxes from continental trade passing through its territory.

The ending of Afghanistan’s current political insecurity and economic adversity as well as the concern of the international community is only possible when the country starts to implement a sustainable economic development strategy. It is up to the Afghan government to  come up with feasible political and economic development policies  to   encourage hope and security for the country’s future. The Afghan government should make the most of the international donor community’s assistance to build its natural, human, capital resources as well as physical and administration infrastructure. Moreover, the Afghan government and its international allies need to establish sustainable security and rule of law to put the existing opportunities into practice. Without stable security and  legal system, the above mentioned strategy and operations shall remain theoretical.