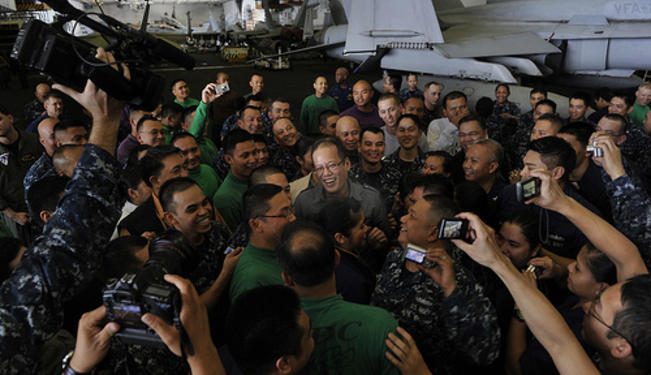 Growing Chinese assertiveness and military capability have led the Aquino government to adopt tougher rhetoric towards China over the South China Sea disputes. Will the Aquino way bring more results than the “ASEAN Way”?

The Aquino government’s tougher posture towards China with regard to the South China Sea disputes is changing the atmospherics of this long-standing regional security issue. While this shift has presented a new approach to tackling the regional tensions, observers are watching whether the “Aquino way” will bring more results than the “ASEAN Way” of non-confrontation. Not all ASEAN members are, however, comfortable with the Aquino approach.

The Philippines, an archipelago entirely surrounded by water, pursues certain core interests in its territorial claims in the South China Sea just like other claimant countries. These include promoting respect for its territorial integrity and sovereignty, security against external threats, access to ocean resources to serve development needs, and maintaining good order at sea. Manila has demonstrated sovereignty over its claimed Kalayaan Islands through continuous occupation of certain features, prevention of illegal entry or illegal fishing, legislation of baselines, and other measures. In seeking peaceful and norms-based approaches to the disputes, it initiated ASEAN’s 1992 Manila Declaration on the South China Sea, which called on claimants to exercise self-restraint and settle disputes peacefully. Following the 1995 Chinese occupation of Mischief Reef, Manila proposed to China a bilateral agreement on principles for a code of conduct, setting up working groups to explore confidence-building measures and functional cooperation. A similar agreement was initiated with Vietnam in 1997, after which Manila and Hanoi undertook joint marine scientific expeditions. Manila also played an active role in promoting a code of conduct for ASEAN and China, resulting in the 2002 Declaration of Conduct of Parties in the South China Sea (DOC). In 2004, the Arroyo government paved the way for state-owned oil companies of the Philippines and China – later joined by Vietnam – to conduct joint seismic research in the disputed areas, a possible precursor to joint development.

The Philippines’ policy posture has, however, been criticised as inconsistent, shifting in emphasis from multilateral dialogue (i.e. ASEAN-China) to bilateral cooperation (between Manila and Beijing), and then back, on the South China Sea question. Such shifts may have been partly due to leadership change and regime interests, but also due to the perceived ineffectiveness of either track. Ultimately, however, Manila’s preference has been to rely on regional diplomacy rather than to undertake any major military build-up or engage in outright balancing strategies against China. Growing economic and people-to-people ties also show that Filipinos continue to value their friendship and links with China. Is there reason to believe that this is changing under the government of Benigno Aquino III?

Among regional states, there is increasing concern over China’s growing military capabilities and its new assertiveness in its territorial claims. At the same time, there is palpable fear that Southeast Asia may become a theatre in which a possible US-China conflict might occur in the forseeable future. Against this backdrop, the Aquino government has been openly critical of China’s assertiveness and is advocating a multilateral, rules-based approach to the disputes, in contrast to China’s oft-stated preference for bilateral talks. Manila has proposed that ASEAN lead a regional initiative in transforming the South China Sea into what it calls a “Zone of Peace, Freedom, Friendship and Cooperation” (ZoPFFC). The concept calls for determining which maritime areas are disputed and which are not, as a starting point in negotiating a joint cooperation zone. It has also expressed readiness to bring the issues before international adjudication, which China opposes. Manila appears convinced that it is time to move beyond mere confidence building to a resolution of the conflict, but the response from other ASEAN countries has been tepid. When Manila hosted an ASEAN maritime legal experts meeting last September to present ZoPFFC, two member states Laos and Cambodia did not even attend. During the ASEAN summit in Bali in November 2011, Philippine Foreign Secretary Alberto del Rosario challenged ASEAN to “play a decisive role…if it desires to realise its aspirations for global leadership”. However ASEAN Chair and Indonesian foreign minister Marty Natalegawa made it clear that the priority remains concluding a regional code of conduct with China.

Chinese media reports, meanwhile, expressed suspicion that the Philippine proposal aims to provide the United States an opportunity to become involved in the disputes. Aquino clearly would welcome a strong US presence in the region, as do some other governments in ASEAN, although not necessarily in the dispute settlement process. During US Secretary of State Hillary Clinton’s visit to Manila on 16 November, Manila and Washington marked the 60th anniversary of their 1951 Mutual Defence Treaty with statements of US commitment to improving the Philippines’ maritime domain awareness and external defence, including its maritime boundaries. Some observers may find that the recent rhetoric and confrontational approach by Philippine officials deviate from the path of constructive diplomacy that ASEAN seeks to pursue with China. Moreover, the strong US presence that the Philippines envisions for the region’s maritime security may not be welcomed by all ASEAN states. Looking for approach that works. While the slow and non-confrontational “ASEAN Way” may not be how the Aquino government wants to play at the moment, some ASEAN countries may in turn not be comfortable with the “Aquino Way”. The question is which approach can bring better results and move the process of conflict management in the South China Sea forward, particularly to prevent the more worrying scenario of great power conflict in Southeast Asia? Or should there be parallel efforts moving toward a common goal? The immediate challenge for the Philippines is persuading both ASEAN neighbours and China that the solidarity and support it seeks is not for promoting Philippine claims or for ganging up on China. The larger aim is to institute cooperative solutions addressing the roots of the conflict based on international law. Concluding an ASEAN-China regional code of conduct on the South China Sea is important for the same reason, with claimant states having a greater responsibility than others to work together. Absent rules-based cooperative solutions, there is a high risk that military power will, in the end, become the final arbiter of the disputes.

Aileen Baviera is a Professor at the Asian Centre, University of the Philippines and, from April-June 2011, a Visiting Senior Fellow of the S. Rajaratnam School of International Studies (RSIS), Nanyang Technological University.

*[This article was originally published by RSIS on January 5, 2012].