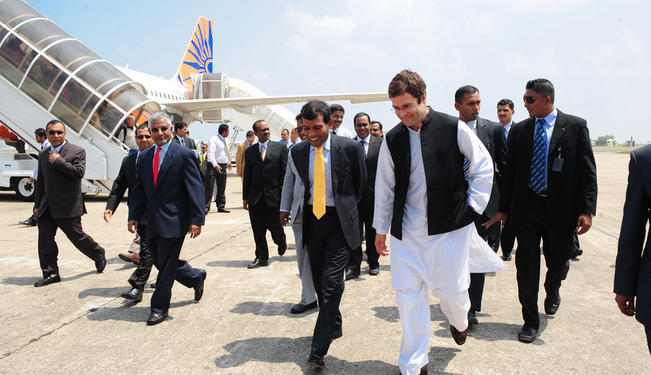 Has Rahul Gandhi missed an opportunity once again to raise his image and stature as a politician and a leader?

Events come and events go. Some events are more talked about before they take place while others give the luxury of discussion in hindsight. Rahul Gandhi’s speech at Confederation of Indian Industry (CII) falls in the latter category. Did the speech and Gandhi scion leave a positive impact on industry captains? Did he renew confidence and optimism in an otherwise dull and gloomy industrial environment prevailing in India? Was there some hint of a road map that he visualized for the nation to get the economy back on its feet?

There are many such questions that need urgent answers. The consensus is that he failed to deliver any answers or specific measures that the industry would expect from a man who could be the Prime Minister in the foreseeable future. It appeared to be more of a PR exercise to initiate and push him towards the Congress Party’s collective desire of thrusting a leadership role on him, his reluctance notwithstanding.

Rahul emphasized on an inclusive growth where all sections of the society could be carried along and voice of the people on ground would form an important part of the growth story. Rhetoric aside, he did not mention any specific measure on how the government intended to turn this into a reality. But ambivalence has become his wont!

In the recent past there were two occasions when the people were galvanized across the nation protesting against corruption and security of women in the country. Indian youth came together across on these two occasions like never before.

But on both occasions Rahul was found wanting, both as a political leader and as a youth icon. He and his party failed to address the issues effectively or to listen to the voice of the people and the nation as a whole. It is therefore ironical to hear Rahul talk about harnessing the energy of Indian youth for national development.  In another part of his speech he emphasized the need for developing new institutions and platforms to achieve all inclusive growth. He was silent with regards to the form these platforms or institutions were supposed to take.

Rahul appears to have neither any idea nor any vision in this regard. Was this an admission that the present model that the Congress government is following has failed to meet the goal of all inclusive growth? From his speech one could infer this – particularly if you are part of the opposition.

It is important that when a novice like Rahul speaks to industry captains, he should refrain from issuing cliché statements since the wizened audience is immune to them. Statements like “India is home to the largest pool of human capital the world,” or “'India has an unstoppable tide of human aspirations,” or “Let’s break out of the mode of incremental improvements and get into mode of generational shifts,” have lost their meaning. This is particularly true when the growth path for the industry is full of road blocks which can be attributed to the government and its unfriendly policies. The government appears ineffective and clueless against mire of its own creation. All governmental actions are targeted at inventing and reinventing short term populist measures to garner votes, albeit at the cost of growth and development. If instead Rahul had outlined some vision or course correction to improve the business and industrial environment that would have not only been appreciated industrially, but also helped to build up his stature and perception. In what was perhaps an admission of his own government’s failure he did acknowledge that if businessmen can succeed in India, they can flourish anywhere – even on the moon! Hopefully Rahul will learn the importance of choosing ones thoughts and words carefully at such high level interactions.

Rahul also reflected on the subject of Centre State relationship. In today’s coalition politics where regional state level parties are becoming increasingly important, this subject assumes a lot of importance. Unfortunately the Congress government has a very poor record in this respect since they seem to have failed miserably in carrying along their coalition partners. Today it has reached a stage where there are doubts if the government would be able to complete its full term since early elections seem a distinct possibility. Congress Party’s high handedness and lack of communication with its allies has been evident on many occasions in the near past on subjects like the National Counter Terrorism Centre (NCTC), Human Rights issue in Sri Lanka, The Naxalite problem and its containment, confronting corruption. The least that he could have done was to state how the government proposed to improve its record on this front.

In today’s scenario where growth is stemmed, effective governance is absent and internal security threats are emerging in various parts of the country, it was necessary for Rahul to have addressed each of these areas in a deliberate manner with a view to assure the audience that the government was seized of the problems on these issues. Instead he delivered a vague political speech on inclusive growth in partnership with the industry. One can read and re-read the whole speech without really getting any idea on how the government or he as a leader of the party in power propose to address the various issues facing the nation. Some industry stalwarts have praised the speech stating it is like a breath of fresh air and has set a stage for meaningful dialogue. But one can wager his last dollar that the participants were disappointed. Some like Sam Pitroda have showered accolades on his maiden speech at CII but having prospered from their co-habitation with the Congress, an honest assessment cannot be expected. Some of the ills that face the nation today are part of their making since they are the perennial advisers to the senior leadership at the helm. While they may laud the statements from Rahul regarding all inclusive growth and contact at the grass root level, these advisers themselves have lost all touch with ground realities and operate from there luxurious cocoons with no understanding of the needs or aspirations of the common man.

There are several other parts of his speech that can be dissected and analyzed but that is not the issue here. The main issue is that has Rahul missed an opportunity once again to raise his image and stature as a politician and as a leader?

Unfortunately the answer is in the affirmative and it does not come as a surprise to anyone who has followed his growth path in last decade or so. He has never been a committed politician nor has he aspired to be one. Politics and leadership is being thrust on him. His reluctance is evident, but perhaps the yearning for power makes it difficult to disown the role being thrust on him.

What the future has in store for Rahul is in the realms of uncertainty and frankly it really does not matter – unless his and India’s future are linked. If the latter be true, then it is indeed a very scary scenario.