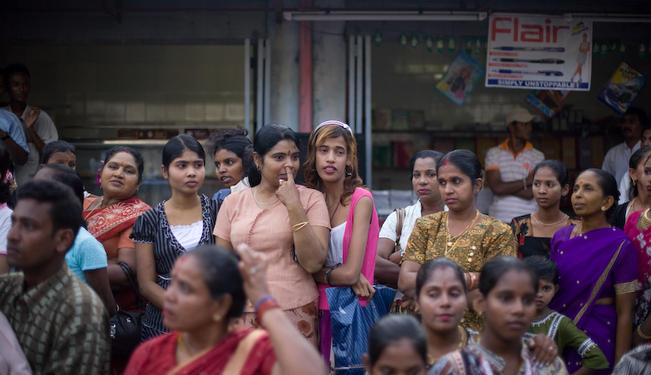 There are 2 million stateless persons scattered across Myanmar and an estimated 400,000 of them are of Indian origin. As India participates in Myanmar’s rejuvenation, can it also use effective diplomacy to advance minority rights in the country?

Even as the world smiles benignly at the democratic opening up of Myanmar and the extended foreign tour of its Leader of the Opposition, Aung San Suu Kyi, the country’s complex domestic dynamic, hidden for years, has surfaced. The spillover of the sectarian violence that began in early June has simultaneously exposed the difficulties of democratisation and the plight of Myanmar’s many underprivileged ethnic minorities.

The clashes between Myanmar’s majority Buddhist population – backed by the border security force, the Nasaka – and the 800,000-strong Rohingya Muslim community, locally referred to as Bengalis, highlights the issue. The violence is the culmination of nearly half a century of government-sanctioned discrimination against the Rohingyas who are not accepted or recognized as Myanmarese citizens. They aren’t the only ones. Almost never discussed is the plight of third and fourth generation Indian and Chinese immigrants who have lived in Myanmar for decades but like the Rohingyas, are considered illegal settlers.

There are two separate groups of minorities vying for recognition in Myanmar. One is composed of numerous ethnic minorities, such as the Karen, whose allegiance to the State, not their nationality, is in question. Frequent military reprisals have caused large sections of this group to flee to Thailand over the years, where they have settled in camps along the border. The second group comprises those who have lived in Myanmar for generations but are simply not recognised as citizens – like the Rohingya Muslims, and those of Indian and Chinese origin.

Both the Indians and Chinese have been in Myanmar for at least a century. Indians, in particular, came after the first Anglo-Burmese War in 1824-26, encouraged by the British Empire to relocate from Bengal, Bihar and South India to Myanmar in an attempt to develop the country. Persons of Indian descent came to dominate the Myanmarese economy as traders, civil servants, merchants, river pilots, soldiers, indentured labourers and moneylenders.

Financial prosperity combined with high positions in the British bureaucracy and their role as money-lenders made the community a target of Burmese nationalist sentiment.

Once independence was achieved, however, the British left Myanmar without making provisions for the grant of official citizenship to these migrants. Latent tensions intensified by the racial and religious differences between the communities – the Indians were dark-skinned and continued to practice Hinduism or Islam in Buddhist Myanmar – making intermarriage and communal mingling rare.

The military coup in 1962, led by General Ne Win, and his ‘Burmanisation’ policy, completely destroyed the already precarious balance between the different communities. The economy was overhauled, Indian and Chinese businesses and trade contracts were rescinded, and the Indian-majority Cabinet was dissolved. Although they had lived in Myanmar for many generations and had no connections with their original societies, approximately 100,000 Chinese and 300,000 Indians were forced out of Myanmar. Those left behind were the poorer immigrant groups, without the wherewithal to flee or start over again.

In 1982, a new Citizenship Act was passed, dividing Myanmarese into three categories. Naturalised citizenship would only be granted to those who could furnish “conclusive evidence” of entry and residence in Myanmar prior to the British annexation; those who were proficient in one of the national languages; and whose children were born in the country. Although many minorities fulfil these requirements, hardly any can supply documentary proof, partly as a result of decades of exclusionary policies and practices.

Consequently, there are over 2 million stateless persons scattered in villages and rural areas across Myanmar. A report published in the year 2000 by the Indian government reveals that about 400,000 are of Indian origin. Without official recognition, they have limited or no access to education, employment and healthcare, and their right to travel, marriage, reproduction and communication is severely restricted.

Opposition leader Aung San Suu Kyi recently promised Myanmarese citizenship to refugee groups in Thailand. But when asked about the Rohingya, she replied that she “didn’t know” whether or not they belong to the country – an ambiguous position representative of the Myanmarese majority’s indifference to its stateless. Last week, Naypyidaw issued a statement categorically refusing to recognise the Rohingyas as citizens. This official disregard cements the animosity between Myanmarese minorities and the majority.

Breaking the stalemate is vital to the democratic process in Myanmar, and to give the government credibility. The country is planning social and political reform, and has just opened its markets to foreign investors and companies. This is the moment for Myanmar to begin rehabilitating its minorities, and for its neighbouring countries to help advance such an endeavour.

The initial impetus for the acknowledgement of its citizens must of course come from within Myanmar itself. Naypyidaw, supported by Suu Kyi’s National League for Democracy, should reformulate immigration laws, make provisions for the settlement of these groups, and grant them all the rights that come with citizenship. Given the history of the stateless in Myanmar, as well as the significance of this new phase of co-operation and dialogue among the neighbouring nations, the process of rehabilitation can become a joint initiative between the South and Southeast Asian countries.

India has already launched infrastructure projects to facilitate greater connectivity between its North East and Myanmar; bilateral trade is estimated to double by 2015 to $3 billion. As these agreements are negotiated, and cross-border activity picks up, the potential for conflict will grow. In the past, New Delhi has discreetly discussed the minority issue with Myanmar and successfully gained citizenship for approximately 20,000 stateless persons of Indian descent. India must use its increased business investment in Myanmar to press for equality for the rest.

China already has a large economic presence in Myanmar – and its profile is sure to increase over the coming years. India and China can together use the invitation they have to participate in Myanmar’s rejuvenation, to nudge the process forward with some quiet but effective diplomacy.