On the 30th January 1948, Gandhi was assassinated. 65 years later Gandhi is still a pertinent, iconic and inspiring figure to India and to the world.

Nearly 65 years after his death, Gandhi remains a symbol of peace for the planet. His emphasis on “ahimsa” (non-violence) and “satyagraha” (insistence on truth) robbed the British Empire of its legitimacy and eventually led to its collapse. A British trained barrister, Gandhi was a canny political operator. He inspired Indians to refuse to cooperate with the British, stop paying taxes and boycott British made goods. He wore a loin cloth that he spun himself to get the country to consume goods made in India in lieu of those made in Britain. He pushed the British into an unenviable position where the costs of occupying India kept rising while the benefits of doing so plummeted. In 1947, a war weary Britain acquiesced to India’s independence. In 1948, Sri Lanka and Myanmar became independent and in another decade the greatest Empire known to history had collapsed.

Gandhi was a transformative figure who perceived the critical distinction between the oppression and the oppressor. His constant message was to fight oppression, not the oppressor. For it was the imperial system that was his target and not the British themselves. He spent a significant period of his life campaigning to remove untouchability, a caste discrimination of a heinous kind, from Indian society. More than seeking independence for India, he was fighting to establish a more just and moral society.

Why is Gandhi still relevant today?

Gandhi stands as an immaculate example for anyone struggling for social justice. Martin Luther King Junior drew inspiration from Gandhi and many political movements around the world still look up to him.

Gandhi played the starring role in India’s struggle for independence. He acquired cult status and is still known in India as “Mahatma,” the great soul, or as “Gandhiji,” with “ji” being a suffix that is attached to a name as a mark of respect. Yet, for all his cult status, Gandhi was a democrat. He was outvoted twice in the top decision making body of his party after the outbreak of World War II and he abided by that decision on both occasions. Today, India suffers a critical lack of democracy. The Italian who married into the Nehru family and rules the country through a figurehead prime minister does not even deign to answer questions from the press. Corruption has reached monumental proportions and consumerism has taken off in urban areas. At first sight, Gandhi might seem irrelevant to modern India but a visit to any village, grassroots movements and the anti-corruption agitation demonstrate that the Mahatma is still a relevant symbol to the country.

Globally, Gandhi’s example is pertinent to any group of people striving for freedom or justice. Apart from moral reasons, there is a clear pragmatic value to Gandhi’s methods. It destroys the legitimacy of the oppressors and often saps their will to rule. Palestinians would do well to heed Gandhi’s example. Non-violent mass action might well succeed where suicide attacks and rocket attacks have failed. 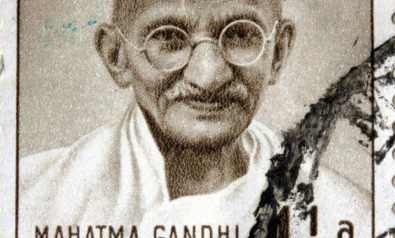