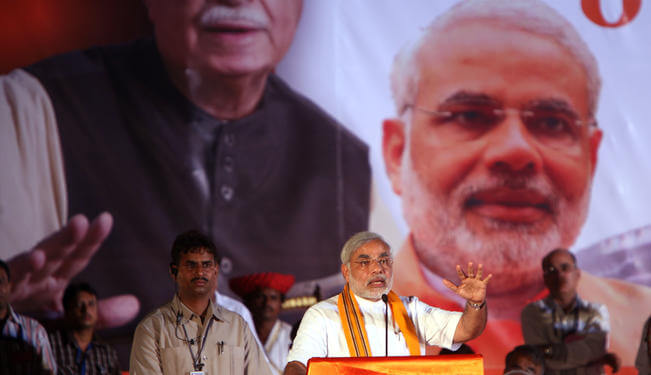 If Modi can address key issues in Asia, India can fuel a regional dynamo.

First, it was the Americans who spoke of a “pivot” to Asia; then, it was the Russians’ turn to consider prioritizing the region. The Europeans, not to be left far behind, also debated following suit. Now, it seems Narendra Modi, the Bharatiya Janata Party’s (BJP) prime ministerial candidate for India’s general elections, is also hinting at a pivot to Asia.

Much has already been written about how Modi should order his international relations were he to become Indian prime minister, but less has been said on what he has indicated in dozens of public addresses so far. While assumptions have been made about Modi’s possible weltanschauung (worldview) based on his criticism of Congress’ policies over the past couple of years, they only reinforce stereotypes about the BJP and right-wing politics (however, calling the party “right-wing” is problematic).

Modi’s speeches — to the public at large as well as to specialized audiences — indicate a different way of thinking and potentially a new direction for India’s foreign policy. The net effect of Modi’s ideas on how India should conduct itself in the international community may well be considered an Indian pivot to Asia.

At first glance, describing Modi’s foreign policy as a pivot to Asia might seem dramatic, especially amid talk of an American, Russian and European pivot to the region. Besides, India is already in Asia. However, there are several factors that make a “pivot” the most apt term to describe what may be India’s new approach to international affairs.

India has seen itself essentially as a Western power; despite its Indic heritage and historical influence in Asia, Indians tend to study, vacation and do business far more in the West than in the East. Westerners also feel less alienated in India than they do further east — familiarity with cricket, curry and Bollywood has made the country more comprehensible to Western sensibilities.

Yet the importance of Asia to India has been expounded from the very beginning. Jawaharlal Nehru, India’s first prime minister, declared that with independence, the former colonized countries of Asia would rise again and take their rightful place in world affairs.

Despite the rhetoric, however, Nehru and the next half-century of governments after his death did little to realize this prognostication. Perhaps because of his own education or by virtue of India being a British colony, Nehru led his newly independent country into the Anglosphere, which was then defined by the titanic struggle between the “communist” Soviet Union and the “capitalist” United States, even though India had no quarrel with either power.

Nehru’s need to occupy center-stage in international politics meant he framed his foreign policy in terms of the Cold War, despite repeatedly professing non-alignment. India participated in peace talks over the Korean War, the International Control Commission for Vietnam, and other proxy conflicts between the US and Soviet Union that had little to do with India.

Even after the Cold War ended, India has still followed the Western framework in conceptualizing its region. In 2012, a quasi-governmental group in Delhi penned “Non-Alignment 2.0,” a foreign policy document that continued the Nehruvian legacy of a Western-oriented foreign policy.

The Importance of Trade

Modi has, so far, shied away from commenting on most foreign policy issues that observers are used to hearing from Indian politicians with upward ambition.

Instead, Modi has repeatedly stressed the importance of trade to his foreign policy; each Indian province might have a trade representative to international partners, and an economic delegation will be attached to every diplomatic mission. As chief minister of the western Indian state of Gujarat, Modi has made several trips to Australia, China, Japan, Malaysia, Singapore, South Korea, Taiwan and Thailand, developing particularly close relations with China, Japan and Singapore.

These relations are even more noteworthy when Modi’s other agenda is considered: infrastructure. The dilapidated state of Indian roads, railways, waterways, housing and power have created a bottleneck around India’s economic growth, while analysts have projected the need for at least a trillion dollars of investment in infrastructure over the next five years, if the country is to continue growing. Modi’s response has been to challenge Indians to develop a hundred new smart cities, bullet trains, national broadband coverage and other infrastructural improvements in the next few years.

To deliver on this vision, India will need large investments from foreign partners in terms of finance, machinery and skilled labor. The most suited countries for such assistance are India’s neighbors, who have experience with similar mega-projects and are also able to extend financial aid. In addition to the vibrant economies of Southeast Asia, China is India’s biggest trading partner and Japan has been its largest aid donor since 1986.

Modi has also emphasized the development of manufacturing in the country to provide jobs as well as to spur exports and growth. Part of this strategy relies on better relations with the countries of the South Asian Association for Regional Cooperation (SAARC) and Association of Southeast Asian Nations (ASEAN).

If Modi can address key issues such as the fear of an Asian hegemon in SAARC and protectionism in ASEAN, India can fuel a regional dynamo. Beyond trade, tourism and education, the countries of the Indian Ocean rim naturally have a far greater convergence with Indian interests than others in terms of climate change, narcotics trafficking, regional security and climate change.

The development of infrastructure and trade in the Indian Ocean region will also ameliorate demographic problems at home. India has long-talked about a “Look East Policy” but done little to deliver on it.

An Indian pivot will develop links between the country’s troubled northeast and its Southeast Asian neighbors, bringing development to the region and hopefully calming demographic friction between Muslims and tribes that erupted in 2012. This fits well with Modi’s strategy of development as panacea — in a country as impoverished as India, it just might be.

Traditional foreign policy analysts may worry that Modi’s approach ignores India’s three largest conundrums: China, Pakistan and the US. This is not the case.

While Modi has made it no secret that he does not expect India’s relations with the US to improve until the Obama administration, thought to be lukewarm toward India, leaves office, it is unlikely that the BJP leader will ignore the world’s largest economy either.

However, Modi may be acting on what many South Asia analysts have realized but are afraid to accept: the road to Islamabad does not pass through Washington. Pakistan’s acquisition of nuclear weapons in the late 1980s forever changed power dynamics in South Asia.

Since then, Islamabad has been waging asymmetric warfare from behind its nuclear shield. The US has not only been unable to help curtail this cross-border terrorism by Pakistan, but has even been selling Islamabad weapons for its fight against terrorism. India is forced to find a solution to Pakistan’s low intensity warfare on its own, potentially through improving its economic strength and defense manufacturing capabilities.

Similarly, India must face a rising China on its own. Southeast Asia and Japan may be of some assistance, but demographics dictate that any viable balance to Chinese power in the region must be provided by India. Given the massive disparity in military and economic power that exists between the two Asian giants, India’s defense must rely first, as Nehru realized, on its economy and ties in the region.

No doubt, Modi’s response to incursions into Indian territory or to terrorism may indeed be firmer than incumbent Prime Minister Manmohan Singh’s, but that would be tactics and not strategy.

Modi’s pivot to Asia would help India augment its internal and regional balancing before taking on greater international responsibility. In this, Modi seems to have paid attention to Deng Xiaoping and Jiang Zemin: observe and analyze developments calmly; secure your own position; deal with changes with confidence; conceal your capabilities; keep a low profile; take action; seize the opportunity; and make the best use of the situation.

Nehru’s Cold War-informed non-alignment had its limitations. It remains to be seen if Modi’s Asia-centric policy will pay India more dividends.