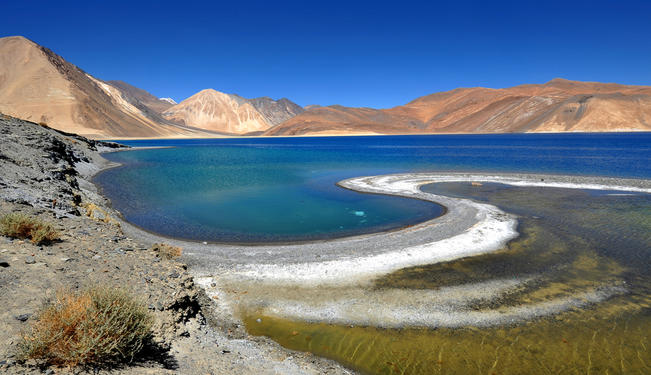 The recent incursion by Chinese troops in Ladakh’s Depsang area should serve as a timely reminder to India that timelines for infrastructure development along the Chinese frontier and plans to boost military capability, do not have the luxury of slippages.

Almost exactly four years ago, the outgoing UPA-I government’s Cabinet Committee on Security (CCS) was meeting for the last time before the results of the 2009 general elections were to be announced. The sole item on the agenda: enhancing India’s military preparedness against China.

According to insiders present at that meeting, some of the members of the CCS wanted to leave the decision to the next government. But better sense prevailed and days before, Prime Minister Manmohan Singh’s first UPA government went ahead and sanctioned the raising of two new Mountain Divisions for deployment in India’s north-eastern State of Arunachal Pradesh, an area claimed by China as South Tibet. In addition, the Indian Air Force was given the go ahead to reactivate half a dozen Advance Landing Grounds (ALGs) spread all along the Arunachal-Tibet portion of the Line of Actual Control (LAC) between the two countries, and base additional squadrons of Sukhoi-30 combat jets in Assam.

The goal was to plug existing gaps in India’s preparedness along the Arunachal Pradesh-China frontier. The two new divisions were to include a squadron of India’s armoured spearhead — Soviet-built T-90 tanks — and a regiment of artillery.

Now, four years later, the two mountain divisions have completed their recruitment, equipping and orbiting in the north-east. After being raised in Nagaland’s Zakhama area, one of them — the 56 Mountain Division —  has been placed at Lekhabali, north of the Brahmaputra, adding teeth to Indian Army’s presence in East and Central Arunachal Pradesh. The other new Division–71 — headquartered at Missamari in the plains of Assam, will enhance troop deployment beyond Tawang in West Arunachal Pradesh, in addition to the 5 Mountain Division already stationed at Tenga.

However, one lacunae continues to persist. Road links to forward areas remain tenuous. The China Study Group (CSG), which controls India’s policy on China, had sanctioned 72 tactically important roads to be built in the tough, mountainous terrain along the China border in the eastern and the western sectors. The roads are being built by the quasi-military Border Roads Organisation to enhance connectivity. But a combination of lethargic BRO, obstructionist state governments, and the ministry of environment and forests has meant that these roads are nowhere near completion. Similarly, the half a dozen ALGs in Arunachal Pradesh are also stuck in red tape.

The recent incursion by Chinese troops in Ladakh’s Depsang area should serve as a timely reminder to the government that timelines for infrastructure development along the Chinese frontier and plans to boost military capability, do not have the luxury of slippages.

Diplomacy and timing (cancellation of Chinese Premier’s visit over the border standoff would have been a loss of face for Beijing) helped end the face off this time. But New Delhi will do well to remember that such an incident is not going to be a one-off. The Chinese will continue to nibble at the undemarcated border and test India’s response as they have done for over 50 years.

In this context, it is necessary to take a peep into what happened in the late 1950s in Ladakh and in the first seven months of 1962, the year both sides fought a bloody war in the high Himalaya.

On December 26, 1959, Peking (as Beijing was then known) sends a note to India talking about Aksai Chin. It says: “This area is the only traffic artery linking Singkiang to Western Tibet because to its north-east lies the great Gobi of Sinkiang through which direct traffic with Tibet is practically impossible…The area all along belonged to China.” Any move by India to improve its military posture close to Aksai Chin will always invite Chinese ire, as it has been doing since the late 1950s.

Events of 1962 will repeat themselves, however. Half a century later, the world has changed: India’s military capability is far better than it was then, and there is too much at stake for Beijing to launch any overt aggression.

However, what has not changed is the Chinese tendency of bullying weaker neighbours and its policy to keep redefining “core” interests according to circumstances. Policy making in China is one continuous process. In India, on the other hand, it varies according to personalities and political parties in power.

While the military in India has overcome the trauma of the 1962 defeat, civilian policy makers appear to be still bogged down by the burdens of the past in dealing with China.

Of course, these mandarins get their act together only under pressure of a crisis like they did in the post-1986 Sumdorong Chu faceoff. The 2009 sanction for additional forces and the speeding up of infrastructure development projects also came after increasing reports of Chinese belligerence along the LAC.

Therefore, it is essential to push for another round of capability-enhancing drive. The pending financial clearance for the Mountain Strike Corps must come quickly, even if it means brushing aside the rather silly query from the finance ministry which asked: “would the Chinese threat persist after 2015?”

Simultaneously, India must re-look and re-tweak its China policy. For instance:

Policy makers in India must  be mindful of the fact that military preparedness and trying to improve diplomatic relations are not necessarily mutually exclusive.