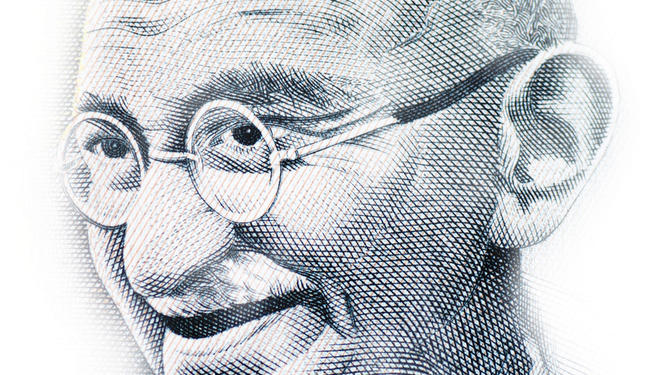 The liberation that Gandhi sought required the renunciation of personal desires.

Over the past century, many have accused Gandhi of being the ultimate altruist. On the contrary, however, Gandhi went on to claim that he was doing the work that took over his life for a very selfish reason: that he wished to obtain moksha, or liberation, from the karmic cycle for his "own person." However, he believed that the only way he could obtain such liberation was by dissolving the individual self, the ego, through devotion and service to others — in order to break down the barriers between the individual MK Gandhi and that divine spark that was/is one with all things.

Gandhi primarily describes himself as a seeker: an individual who desires communion with the divine, and is in search of the best way to discover it. As a seeker, he is an individual, and motivated by the personal goal of this divine communion. Gandhi states this explicitly:

"I am but a humble seeker after Truth and bent upon finding It. I count no sacrifice too great for the sake of seeing God face to face. The whole of my activity[,] whether it may be called social, political, humanitarian or ethical[,] is directed to that end. And as I know that God is found more often in the lowliest of his creatures than in the high and mighty, I am struggling to reach the status of these… I am but a struggling, erring, humble servant of India and therethrough of Humanity."

But Gandhi also feels he can only begin to reach closer to this goal by reducing the amount of individuality, ego, and personal desires that he has. Thus, in order to become closer with his own liberation, he must begin caring less about his own path, and instead more for others. This process begins with humility — an attribute he tries to cultivate within himself, while he sees the vestiges of ego that are left behind as failures, but necessary to interact in the world as it is.

Gandhi continues to acknowledge his personal desire here. He is not seeking the liberation or freedom from suffering for all beings, such as the Bodhisattva traditions that would hold, but rather the service of others to precisely obtain his own moksha.

One of the greatest scholars on Gandhi is quite aware of this: "His quest is to know himself, to attain Moksha that is to see God (Truth) face to face. In order to fulfill his quest, he must be an ashramite, a satyagrahi, and a seeker after swaraj."

"I am a humble aspirant for perfection. I know my way to it also. But knowing the way is not reaching its end… I am free to confess that daily[,] I am obliged to expend a great amount of mental energy in acquiring control over my thoughts… If I was absolutely free of egoism, I would have resigned myself to the inevitable; but I wanted to live in the present body. I am a humble seeker after truth. I am impatient to realize myself, to attain moksha in this very existence. My national service is part of my training for freeing my soul from the bondage of flesh. Thus considered, my service may be regarded as purely selfish, I have no desire for the perishable kingdom of earth."

Thus, Gandhi's service to his country, humanity, and all living things, in some sense, can be seen to come out of a personal religious desire. He wants to be free of the suffering of the Karmic cycle, so he must be willing to take on the suffering of others in service. Though he makes suggestions to his followers on practices to aid them in their own spiritual journey, Gandhi firmly believes that most if not all beings will continue in the cycles of maya after he has left them; he does not seem to worry about this and continues to focus on his own path and desire for liberation.

In his last year, a close associate of Gandhi's, N.K. Bose, wrote:

"He said the desire for moksha was indeed there, but it was not meant for anyone other than the individual himself. The world was interested in the fruits, not the root. For the tree itself, however, the chief concern should be not the fruit, but the root. It was in the depth of one's own being that the individual had to concentrate. He had to nurse it with the water of his labour and suffering. The root was his chief concern."

This demonstrates that even at the end of his career, the goal was never simply one of achieving independence for the nation, nor one of helping mankind (though that may be considered a side-goal). Rather, his goal was liberation through a realization of the divine. But he could not act for a single individual (even for the goal of liberation) — for the belief was that a true dissolution of ego could come only through a renunciation of the individual self; the mind/body complex that was separate in the world of maya; and could only come to the person who has removed those barriers between themselves and the rest of the species, if not all living beings.

Therefore, service to the whole became a necessary component of trying to reach spiritual enlightenment. In his own words, Gandhi puts this both powerfully and succinctly:

"Man's ultimate aim is the realization of God, and all his activities, social, political, religious, have to be guided by the ultimate aim of the vision of God. The immediate service of all human beings becomes a necessary part of the endeavour, simply because the only way to find God is to see Him in His creation and be one with it. This can only be done by service of all. I am part and parcel of the whole, and I cannot find Him apart from the rest of humanity. My countrymen are my nearest neighbours. They have become so helpless, so resourceless, so inert that I must concentrate myself on serving them. If I could persuade myself that I should find him in a Himalayan cave I would proceed there immediately."

The paradox becomes apparent here, as Gandhi felt it was necessary that, in order to achieve liberation for one's "self," one has to stop being concerned about the individual self. Instead, it was this desire for personal liberation in the first place, which allowed him to go through the process that would reduce his own personal desires. 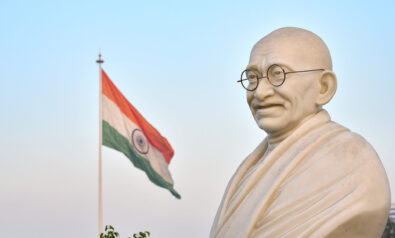