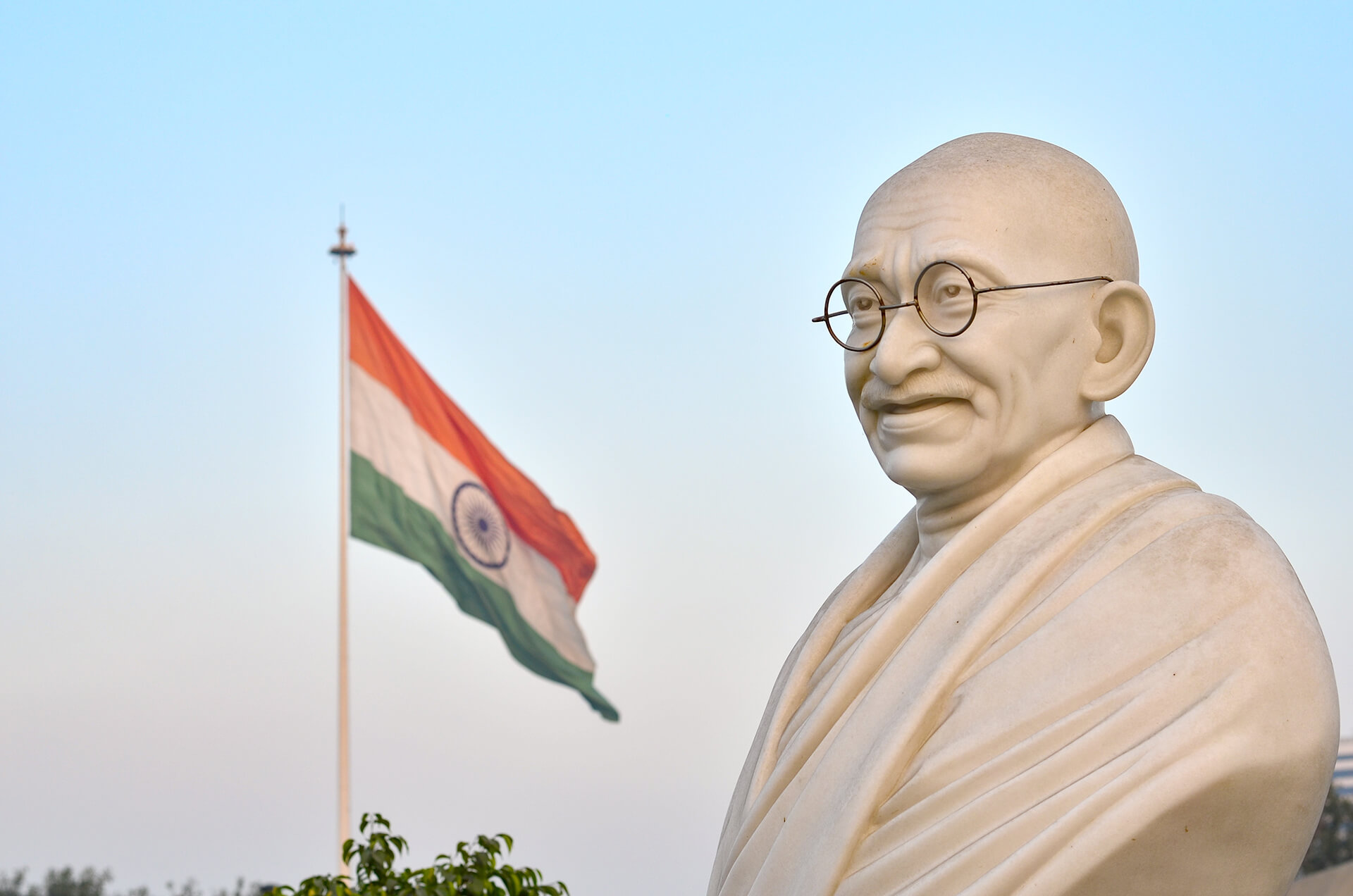 New Delhi, India, 2020. Bust of Gandhi statue with Indian tricolor in the background in Connaught Place. Mahatma Gandhi is the Father of the Nation. © PhotographerIncognito/ shutterstock.com

Despite his blunders, Gandhi continues to be more relevant than ever.

Mohandas Karamchand Gandhi had wide-ranging interests and lived in three continents before exploding to prominence on the national and global stage. He started communes, ran newspapers, walked a lot, wrote innumerable letters, and somehow found the time to dismantle the mightiest empire in human history.

It is now folklore that Gandhi, a privileged young man, started to find his calling after being thrown off a train in South Africa because he was in a first-class compartment meant only for whites. The story, like a mythical tale, captures something fundamental about the man. Gandhi is a symbol of justice. He is a modern-day David, who took on Goliath and won.

As human beings, the idea of fairness is hardwired into our brains. Most of us tend to be uncomfortable with slavery, apartheid and discrimination, especially when the brutality of such a system is laid bare before our eyes. Justice is a universal aspiration, and Gandhi’s valiant multi-decade struggle is an inspiration for people around the world to carry on despite the odds. At a time of historic wealth and income inequality, declining social mobility, and increasing surveillance powers of governments, Gandhi is a reminder that, regardless of the odds, a better world is possible.

There was a time when Lenin and Che were symbols of justice too. Today, they have largely lost their sheen. Gandhi has endured because he focused equally on the means as on the ends. He fought the British system and not the British. He was able to popularize the ancient idea of ahimsa or non-violence as it is now known outside India. It is an idea that goes back to Gautam Buddha and Mahavir, the founders of Buddhism and Jainism, and beyond. Gandhi took that ancient Indian idea to oppose British imperialism whilst, at the same time, emphasizing engagement with the British people.

For over three decades, India’s movement for independence was largely non-violent despite the atrocities of the British. The notion of “satyagrah,” which literally translates as insistence on truth, became the guiding force in India’s struggle for independence. The focus on peace and truth as opposed to violent revolution contrasted starkly with contemporaries like Mao, Hitler and Stalin.

Gandhi offered a non-dogmatic, open, inclusive, peaceful, and truthful vision of the world that continues to inspire long after the ideas of many of his contemporaries have lost their luster.

Gandhi continues to be relevant today because of his political genius. For years, the British had been able to dominate the means of discourse. In India, the British government was seen as largely benevolent. The empire was run largely by Indians who had been co-opted by the British to run the organs of the state. The best tried to enter the elite Indian Civil Service, whilst the less-educated tried to serve in more minor positions of the centralized bureaucratic apparatus of the imperial state.

Indians were largely unaware of the scale of the wealth transfer going on from India to Britain. A combination of oppressive taxation, government-guaranteed returns on British investments, and trade policies that opened up Indian markets whilst keeping British markets closed off, proved highly profitable to the British. In the two centuries of British rule, India went from being the second-largest economy in the world to becoming a land of famine where life expectancy dropped to 32.

Gandhi hit the empire where it hurt. By dressing in a loin cloth and using the spinning wheel, he became a symbol of self-sufficiency. Indians started boycotting textiles made in Lancaster and Manchester, and made India a less profitable colony for Britain. He led the famous Dandi March to the sea to break the salt laws that made it unlawful for anyone in India to manufacture salt without paying a tax on it to the British. Everyone eats salt and the universality of the issue galvanized the country to embark on the Civil Disobedience Movement that shook the foundations of the empire. The ensuing oppression with which the British crushed the movement eroded Britain’s credibility, not only in India but the rest of the world. Perhaps more importantly, it raised British costs of running India as a colony.

Gandhi used his genius to confront untouchability with the same indefatigable energy with which he fought the British.

It is not widely known either in India or outside that after the Civil Disobedience Movement, Gandhi embarked on a mighty country-wide tour to ameliorate the condition of the lowest castes of Hindu society. These were the so-called “untouchables,” who were not supposed to be seen or heard by the rest of society. They were the poorest sections of Indian society and did the most menial of jobs, such as cleaning fecal matter or skinning animals. They were denied access to water, worship and education. Gandhi walked the length and breadth of the country to open the great temples that had closed off their gates to these castes. He called the people of these castes “Harijan,” which translates as God’s people.

In the latter years of his life, Indians referred to Gandhi as Bapu, a word that means father. He became a symbol of a movement to create a young nation out of an old civilization that would marry modern ideals with ancient wisdom. Winston Churchill referred to him as a “half-naked fakir.” Few realize that Churchill spent the 1930s fretting more about “seditious” Gandhi than about Hitler. Gandhi rejected Churchill’s offer of talks about “self-rule” after the end of World War II, in return of support for Britain’s war effort as a “post-dated check on a failing bank.”

Gandhi was both Bapu and a fakir. He eschewed material possessions and lived the life of an ancient Indian sage. Yet above all, he was a statesman. When India was arbitrarily divided into two countries by the stroke of Cecil Radcliffe’s pen, India experienced the biggest migration in human history and brutal riots. Gandhi began a fast unto death to shame his people to stop slaughtering each other. This was perhaps his statesmanship at its best and restored sanity to the country.

Like any great man, Gandhi had feet of clay. He committed blunders that have cost India deeply. Going alone to the Round Table Conference at the end of the Civil Disobedience Movement was not a wise idea. He was outmaneuvered by the British, who claimed the Congress to be a Hindu party because he was their sole representative.

Gandhi did not reach out early enough to Jinnah or strive to keep Subhas Bose in the fold. Both these characters were immensely influential figures in the movement for Indian independence. The former ended up as the father of Pakistan and the latter ended up dying in a plane crash after fighting alongside the Japanese.

Most importantly, Gandhi made the monumental blunder of choosing Nehru over Patel. Educated in the expensive British boarding school of Harrow, Nehru was what some would derisively call a “coconut,” a man brown on the outside but white inside. He was enamored of the Soviet Union and overlaid a socialist bureaucracy on an already oppressive colonial edifice.

After Gandhi’s assassination, Nehru dumped Gandhian ideas of grassroots democracy in favor of centralized planning that has since led to disastrous effects. Unlike Gandhi, Nehru was enamored of power and died in office. Today, while Gandhi’s heirs live a life of relative anonymity, Nehru’s heirs run the country and have become the de facto royal family of India with a last name that is ironically, “Gandhi.”

Despite his mistakes, Gandhi continues to be an inspirational figure around the world. In an earlier era, people like Martin Luther King Jr and Nelson Mandela drew inspiration from him.

Today, we live in a world where our economic and political systems continue to be unjust, but the injustices are less visible than slavery, colonialism or segregation. Historic wealth inequality is creating a new kind of class system. Concentration of power in the hands of governments is weakening individual rights, such as liberty and due process that have been achieved after much sacrifice. Increasing materialism is leading to a poverty of spirit in many parts of the world, where people are increasingly besotted with luxury goods and cosmetic surgery. Much of the Middle East and North Africa is in a quest for basic human dignity from oppressive regimes and faces the specter of sectarian violence that India faced in 1947.

The world is on the cusp of new struggles for justice and liberty and, of all 20th-century figures, no one offers a better roadmap to conduct ourselves than Gandhi.