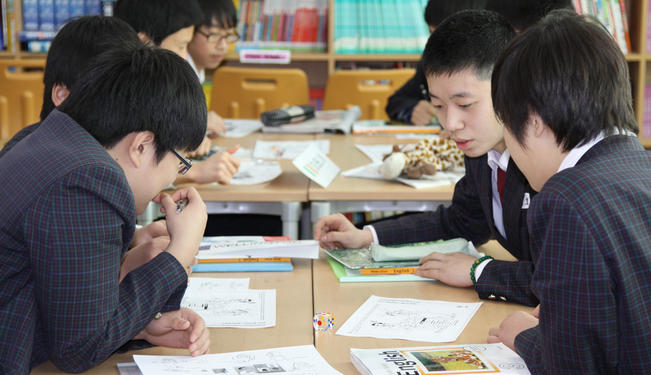 Internationally speaking, the education system in South Korea is nothing but astonishing. Even President Obama has praised its outcomes. The 2009 Programme for International Student Assessment (PISA) results rank it first place in all literacy and math skills, and third place in science – quite impressive results for a country that 50 years ago had a GDP per capita of $87 and has managed to raise it to $20,000. The engine of such economic development has been the education system. However, after visiting Korea, I have a much more nuanced vision of their success.

As a student in the Kennedy School at Harvard, in March I went to Korea on a trip organized by our Korean classmates to show us their country for a week. I witnessed what a PBS report calls Korea’s “education fever” when we visited a school. I was surprised, to say the least, when a teacher asked her 16 or 17 year-old student how many hours his parents told him was the optimum sleep he should get every night. His answer was shocking: “four or five, ideally four, but it could be five”. It was only then that the taller table in the back of each classroom made sense to me: it’s easier for sleepy students to concentrate in the class if they are standing up. But, what do they do in the remaining 20 hours of the day? They study. Why? Because “…if I go to a bad university, I can be ignored by other people” as one of the students interviewed by PBS said. According to PBS and coherent with my experience, there seems to be a fierce competition among Korean students in order to enter prestigious universities. It is with such goal that they are able to work extremely hard for very long periods of time.

Nevertheless, it seems to me that this four-hour sleep strategy – which is apparently handed from one generation to the next – is the means through which Koreans have managed to develop a country in 50 years. The “education fever” mentioned above easily translates into “work fever”among adults. Hard work and little sleep seems to be grounding the Korean miracle of the last decades. They appear to me as a striking example of an education system for economic development.

All education systems serve a wide array of purposes, regardless of whether they were intentionally designed for them or not. They feed economic development by nurturing human capital, reproduce the culture with its inequities, and develop the identity and self-worth of students. But if it is designed to foster only one of these purposes, as the Korean system seems to be, since the other two are inevitable, they accommodate unexpected consequences. Evidence of success does not seem to be as straightforward as it is with economic development, when it comes to how this education system is affecting the Korean culture and the self-worth of students.

Having been such a poor country and grown so impressively fast, the harsh days memories are still live and well in Korea; one can feel them in the air and they permeate the conversations we had with people everywhere. The days of scarcity are too close to forget how relevant it is to produce and have things in order to survive. And this permeates the culture – quite frankly after traveling through places as diverse as South America, Europe, the US and the Middle East, walking in Seoul did not feel very different from walking in New York. Only the alphabet reminded me that I was in Korea: the architecture, the dressing code, and the way people relate to each other seemed to me very westernized. It appeared in my eyes as striking evidence of the cultural impact of an education system for economic development.

Finally, students’ self-worth also seems to be at stake under an education system designed exclusively for economic development. According to the PBS report cited above, Korea more than doubles the US in its suicide rate with 20 every 100,000. This is why Bae Eun-hee, representative of the National Assembly who serves on the education committee, calls for a redefinition of what Koreans understand by success and achievement. My experience can also somehow relate to this issue: while an official from the Ministry of Education acknowledged his doubts to me regarding how happy Korean students were, a high school student also told me that he wanted to work in the Ministry of Education in order to ensure a less stressful school experience.

It is extremely hard to make comparisons since the differences between the two Koreas are outstanding in its outcomes, but when a North Korean defector described to me how North Korean students were indoctrinated, I couldn’t stop thinking that they don’t seem to be the only ones. An education system designed exclusively for economic purposes seems to be doing not the same, but something surprisingly similar in South Korea. I wonder if this is the price a poor country has to pay for development, or if there is some other differently paced way to achieve the South Korean miracle.