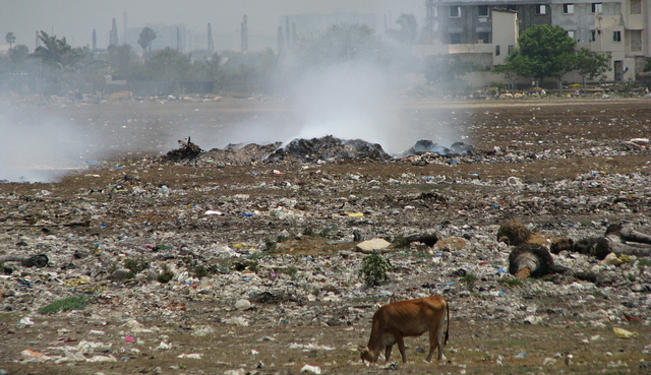 Solid waste management is a critical part of urban infrastructure. It impacts the image of a city as clean or dirty, and holds the potential to attract new businesses and residents. It also has implications for the environment. Solid waste is a major source of environmental pollution in Indian cities. National data show that per capita waste generation in cities varies between 0.2-0.6 kg per day and is increasing by 1.3% per annum nationally (Vaidya (2009)). As reported by Development Alternative, these rates are rising with increasing incomes, changing lifestyles, and food habits. It is estimated that anywhere between 30-35% of the total waste remains uncollected from the city roads (Sridhar and Mathur 2009)). The generation of solid waste is expected to increase to a mammoth figure of 300mn by 2047, i.e., to 945 grams per capita. The combined effect of the inefficiencies in solid waste collection and its inadequate and unsafe disposal is evident in widespread insanitation, contaminated water, and the high incidence of chronic respiratory and communicable diseases found in India’s cities.

The importance of solid waste management for businesses may be seen in the fact that the Federation of Indian Chambers of Commerce and Industry (FICCI) did a review of municipal solid waste (waste generated by households, shops, offices, and other commercial units) management in Indian cities in 2009. The study examined solid waste management in 17 cities with a population above one million, and five cities with population of less than one million. Among the 17 million-plus cities, Ahmedabad, Delhi, Greater Mumbai, Jaipur, Kanpur, Lucknow, Pune, and Surat generated more than 1,000 tons per day (TPD) of waste, with the two largest metros, Delhi and Greater Mumbai, being the highest generators of municipal solid waste at 6,800 TPD and 6,500 TPD respectively. Three million-plus cities—Indore, Ludhiana, and Vadodara—generated 500-1,000 TPD of waste. The remaining cities of the 17 surveyed by FICCI produced comparatively less quantum of waste i.e., < 500 TPD. It was found that five class II cities generated waste in the range of 65-400 tonnes per day, with Shimla being the lowest generator among these cities (65 TPD) and Chandigarh being the highest (400). As pointed out in Sridhar and Mathur’s book Costs and Challenges of Local Urban Services: Evidence from India’s Cities, these figures should be viewed as being conservative given that rag-picking in India is an actively growing industry and the fact that city capacities to collect and dispose waste are often lower than the quantities of waste generated (the actual waste would be at least 30-40% higher than these figures). Despite these forgiving numbers, only six out of the 22 surveyed cities in the FICCI study had sanitary landfills (SLFs), while ten cities including major waste generators like Delhi, Greater Mumbai had the greatest generators of waste, while Kanpur had no sanitary landfills.

It is evident from the above that solid waste management in Indian cities has a long way to go.

With respect to solid waste management, the case of Surat has been touted as the typical example of a best practice in the country. Solid waste management is usually a crisis that triggers reforms. In the case of Surat, it was a crisis in the form of the plague (of 1994) that acted as the catalyst of urban and civic management in the city. Swamy, Vyas, and Narang summarize in their article “Transformation of Surat: From Plague to Second Cleanest City in India,” that Surat’s management of the city transformed it from the era of the plague to one of the cleanest cities in the country. Soon after the outbreak in 1994, a massive cleanup operation was launched by the Surat Municipal Corporation in early 1995. This was followed by administrative reforms that consisted of sub-dividing the pre-existing 6 zones in the city into 52 sub-zones making sanitary inspectors responsible for each of them, detailed in Costs and Challenges of Local Urban Services: Evidence from India’s Cities. Further, a system of strict enforcement and monitoring ensured that the checks were in place. For instance, a system of fines for littering public places was instituted. Finally, contracting was introduced to improve waste collection efficiency and street cleaning. All of these practices ensured that Surat had a very high solid waste collection efficiency (greater than 95% according to Sridhar and Mathur, which implied most of the garbage which was generated was collected).

What can be done to improve the management of solid waste in India’s cities? It is clear that the immense scope that exists for solid waste treatment is not being exercised by cities due to lack of know-how, technical manpower, and most importantly, financial constraints. One way of overcoming these constraints could be greater private-sector participation in fighting the menace. The private players who have better know-how and resources should be roped in to work with the municipal authorities to ensure proper waste management in cities.

Apart from the issue of finances and the multiplicity of institutions that are well-known for affecting service delivery and expenditure, the evidence shows that public service delivery is likely to be better in cities with a better informed public; one more aware of the need for good quality public services. The direct outcome of this is a more informed and proactive resident welfare association (RWA), a formal form of citizen participation. We need active citizen participation in overseeing the provision of basic services.

Adam Smith’s view of self-interest applies in this context. Cities, after all, are conglomerations of small local economies where local public service delivery is managed by RWAs. Given this truth, areas with relatively more proactive and self-interested RWAs would have better solid waste management and better levels of other services, when compared with those in less proactive ones. This is illustrative of the need for active citizen participation in overseeing the provision of basic services, and also of the fact that privatization is not a panacea.

At the policy-level, there are several measures that have been taken to make the management of solid waste more scientific. The Ministry of Environment and Forests has issued the Solid Waste Management and Handling Rules of 2000. There are also ward-level committees in place in several cities whose experiments are elaborated upon by Development Alternative. Some examples of experiments in Indian cities include the Bhagidhari scheme in Delhi for ensuring close cooperation of the Residents Welfare Association (RWAs), civic agencies, and the government; the Bangalore Agenda Task Force in Bangalore with involvement of private agencies; and the Mumbai initiative, involving the corporate sector. But there exists neither an incentive for waste reduction nor a penalty for excessive waste generation or its indiscriminate dumping on roads, curb-sides, or even at the designated landfill sites, state Sridhar and Mathur. Further, training on hygienic handling of solid waste management (using gloves), especially for those handle most of it, is needed.

In cricket, we have seen a new forum in the Indian Premier League (IPL) that spurs competition across cities and sets the tone: It is high time that the branding of cities should begin with competition in public service delivery (read: solid waste management). Sridhar outlines a model in the article “Better cities: The IPL way” published in the journal Mint, which can be used as a pilot in some cities to make RWAs the fulcrum of activity with regard to local public services; most importantly solid waste management.

Last but not the least, cities in India should begin to systematically gather data on solid waste generation, collection, and disposal. Currently it so happens that in several cities, solid waste collected is equal to the amount generated, implying a cent percent waste collection efficiency, which can be misleading to researchers and policymakers. With real-time data collection on the amount of garbage generated, data on collection can be estimated through information on the number of trucks, their capacity, and number of trips made daily. Information technology can play a vital role in this, by enabling municipal employees to track the status of generation, collection, and disposal through real-time monitoring systems.

The above steps outlined will not be a panacea, but will be the first steps towards making Indian cities clean and improving their ambience for residents and businesses. If measures are not taken to improve solid waste management and other services, cities are likely to lose their advantage in attracting both people (skills) and enterprise (firms), despite their other advantages.