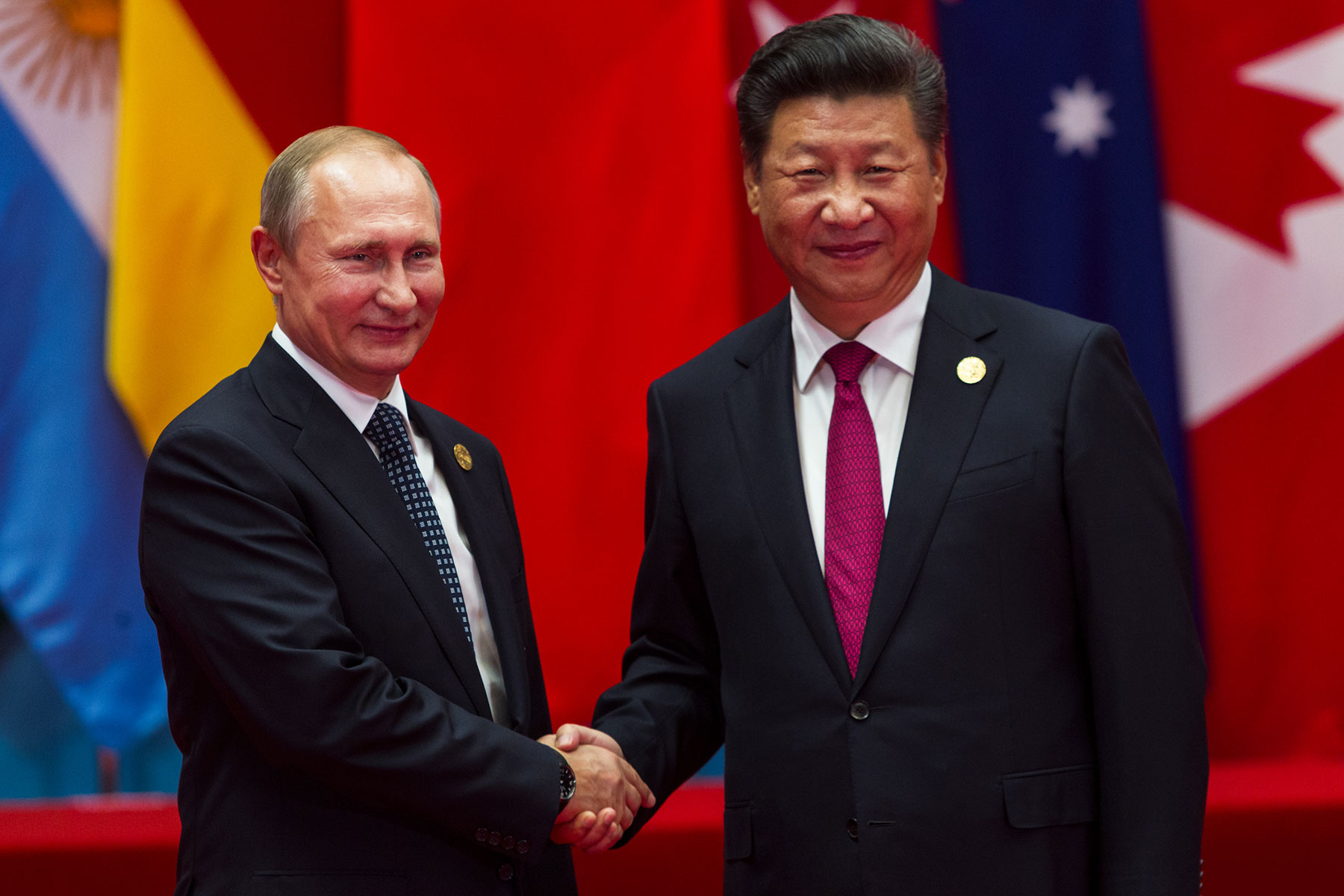 The leaders of Russia and China are joining forces. Russian President Vladimir Putin traveled to Beijing for the Winter Olympics to show solidarity with his largest trade partner at an event that the United States, Canada, the United Kingdom and Australia are boycotting diplomatically.

The statement that Putin signed with Chinese leader Xi Jinping confirms their overlapping interests, their joint insistence on the right to do whatever they like within their own borders, and their disgust over the destabilizing nature of various US military actions.

There’s much high-flown language in the statement about democracy, economic development and commitment to the Paris climate goals of 2015. But the timing of the statement suggests that it’s really about hard power. Putin didn’t travel all the way to Beijing and Xi didn’t meet with his first foreign leader in two years just to hammer out a general statement of principles. Putin wants China to have his back on Ukraine and is supporting Chinese claims over Taiwan and Hong Kong in return.

This isn’t an easy quid pro quo, given that the two countries have long had a wary relationship. In the past, Russia eyed China’s global economic ambitions with concern, and a certain type of Russian conspiracy theorist worried about large numbers of Chinese moving into the underpopulated Russian Far East. Before Putin took over, China was uncomfortable with the political volatility of its northern neighbor. After Putin, Beijing was not happy with the Kremlin’s military escapades in its near abroad.

But that is changing. “For the first time in any of Russia’s recent aggressions, Putin has won the open support of China’s leader,” Robin Wright writes in The New Yorker. “China did not back Russia’s war in Georgia in 2008, or its invasion of Ukraine in 2014, nor has it recognized Russia’s annexation of Crimea.”

The geopolitics of the new relationship between China and Russia is certainly important. But let’s take a look at what’s really fueling this new alliance. Quite literally.

Inside the Arctic Circle, just across from the bleak military outpost of Novaya Zemlya, Russia has built the northernmost natural gas facility in the world: Yamal LNG. More than 200 wells have been drilled to tap into the equivalent of 4 billion barrels of oil. Nuclear-powered icebreakers clear the port of Sabetta for liquefied natural gas tankers to transport the fuel to points south. Russia also plans to build a train line to ship what it expects to be 60 million tons of natural gas per year by 2030.

Russia can thank climate change for making it easier to access the deposits of natural gas. It can also thank China. Beijing owns about 30% of Yamal LNG. The Arctic is quite far away from China’s usual Belt and Road Initiative (BRI) projects. Yamal is also an increasingly perilous investment because melting permafrost puts all that infrastructure of extraction at risk. But China needs huge amounts of energy to keep its economy growing at the rate the central government deems necessary.

That’s why so many of the BRI projects involving Russia are centered around fossil fuel. At the top of the list is the first Power of Siberia pipeline, which opened in 2019 to pump natural gas from the Russian Far East into China. A second such pipeline is under consideration, which would connect China to… Yamal LNG.

At the moment, the natural gas from the Russian Arctic supplies consumers in Europe. With a second Power of Siberia pipeline, Russia could more easily weather a boycott from European importers. Yamal, by the way, is already under US sanctions, which has made Chinese financial backing even more essential. China is investing a total of $123.87 billion in the three phases of the Power of Siberia project, which is more than any other BRI oil and gas investment and four times what China spends on energy from Saudi Arabia.

Let’s be clear: the bear and the dragon don’t see eye to eye on everything. As Gaye Christoffersen writes in The Asan Forum: “China focused on infrastructural projects useful for importing Russian natural resources, while Russia focused on developing industries in resource processing. The two sides failed to reach a consensus. Later, China insisted, as a Near-Arctic state, on equal partnership in developing the Northern Sea Route, while Russia demanded respect for its sovereignty and rejected China’s Arctic claims. They are still in disagreement despite joint efforts.”

But the basic relationship remains: Russia has energy to sell and China is an eager buyer. In a side deal that coincided with their recent Olympic statement, for instance, China agreed to purchase $117.5 billion worth of oil and gas. “Rosneft, Russia’s largest oil producer, announced a new agreement to supply 100 million tons of crude through Kazakhstan to the Chinese state company China National Petroleum Corporation over the next ten years—while the Russian energy giant Gazprom pledged to ship 10 billion cubic meters of gas per year to China through a new pipeline,” writes Frederick Kempe at the Atlantic Council. Talk about greasing the wheels of cooperation.

Putin hasn’t given up on Europe. He still has friends in Victor Orban’s Hungary and Aleksandar Vucic’s Serbia. Europe remains the biggest market for Russian oil and gas. And both NATO and the European Union continue to attract the interest of countries on Russian borders, which means that the Kremlin has to pay close attention to its western flank.

But the Ukraine crisis, even if it doesn’t devolve into war, could represent a turning point in contemporary geopolitics.

Vladimir Putin and Xi Jinping share a great deal in common. They are both nationalists who derive much of their public legitimacy not from an abstract political ideology, but from their appeals to homeland. They have a mutual disgust for the liberalism of human rights and checks on government power. Despite their involvement in various global institutions, they firmly believe in a sovereignist position that puts no constraints on what they do within the borders of their countries.

But perhaps the most operationally important aspect of their overlapping worldviews is their approach to energy and climate.

Both China and Russia are nominally committed to addressing climate change. They have pledged to achieve carbon neutrality by 2060, though they both resort to some dodgy accounting to offset their actual emissions and meet their Paris commitments. China is more serious in terms of installing renewable energy infrastructure, with solar, wind and other sources responsible for 43% of power generation. Russia’s commitment to renewable energy at this point is negligible.

But both remain wedded to fossil fuels. It’s a matter of economic necessity for Russia as the world’s largest exporter of natural gas, the second-largest exporter of petroleum and the third-largest exporter of coal. Fossil fuels accounted for over 60% of the country’s exports in 2019; oil and gas alone provide well over a third of the federal budget. All of this is in jeopardy because a good number of Russia’s customers are trying to wean themselves of fossil fuel imports to cut their carbon emissions and to decrease their dependency on the Kremlin.

But not China. Despite its considerable investments into renewable energy, Beijing is still a huge consumer of fossil fuels. Chinese demand for natural gas has been rising for the last few years and won’t peak until 2035, which is bad news for the world but good news for the Russian gas industry. Oil consumption, which is more than twice that of natural gas and is rising more slowly, will peak in 2030.

Coal is still China’s largest source of energy. “Since 2011, China has consumed more coal than the rest of the world combined,” according to ChinaPower. “As of 2020, coal made up 56.8 percent of China’s energy use.” In 2020, as Alec MacGillis points out in a New Yorker piece, China built three times more power-generating infrastructure from coal than the rest of the world combined, and it continues to mine staggering amounts of the stuff. Despite all the domestic production, however, China still relies on imports. Because of trade tensions with Australia — the world’s second-largest exporter of coal after Indonesia — China has increasingly turned to Russia to meet demand.

In other words, Russia and China are positioning themselves to use as much fossil fuel and emit as much carbon as they can in the next two decades to strengthen their economies and their hegemonic power in their adjacent spheres—and before international institutions acquire the resolve and the power to hold countries to their carbon reduction promises.

Yes, other countries are slow to abandon fossil fuels. The United States, for instance, relies increasingly on natural gas for electricity generation to compensate for a marked reduction in the use of coal. Japan remains heavily dependent on oil, natural gas and coal. So, Russia and China are not unique in their attachment to these energy sources.

But if the world’s largest consumer of fossil fuels teams up with one of the world’s largest producers, it doesn’t just discomfit NATO generals and the trans-Atlantic establishment. It should worry anyone who believes that we still have a chance to prevent runaway climate change by 2050.