Myanmar’s Union Election Commission has announced that elections will go ahead on November 8 as planned, despite earlier reports of potential delays.

The elections are widely expected to result in considerable support for the opposition party, the National League for Democracy (NLD). A decisive victory for the NLD would have positive implications for democratic governance in Myanmar, but could also increase the prospect of military intervention, which would conversely serve to hinder democratic development.

A victory by the ruling, military-backed Union Solidarity and Development Party (USDP) would largely maintain the current status quo and slow the prospect of reforms to the military’s considerable political and economic influence. Popular unrest remains a threat in either outcome, particularly if doubts arise over the integrity of the polls.

Who are the key players?

The elections are being contested by the NLD, USDP and a number of smaller ethnic parties from Myanmar’s border states that make up 31% of available parliamentary seats. The NLD and USDP are the only parties campaigning nationwide, but neither is likely to win enough votes to form a majority government, making a coalition with smaller parties a likely necessity.

1) The military orchestrated Myanmar’s political transition to a nominally civilian government in 2011, and maintains a strong political position on the back of a constitution passed in a sham referendum in 2008. The constitution gives the military 25% of parliamentary seats by appointment and, therefore, empowers it with a de facto veto over constitutional changes that require a parliamentary majority of more than 75%. Constitutional reforms have become a key concern in the past four years and are a major political issue ahead of the elections.

The head of the armed forces, General Min Aung Hlaing, has given repeated assurances that the military will respect the elections regardless of the victor, yet is thought to favor a USDP-led government, which will serve to prolong its economic and tacit political influence. The military has extensive business interests in Myanmar’s key sectors, including oil and gas and mining, and it will aim to strongly protect these interests regardless of the election result. For instance, the Union of Myanmar Economic Holdings Ltd is a military-managed state-owned company comprising at least 54 subsidiaries, joint-venture companies and factories active in oil and gas, mining, banking, manufacturing, trading, logistics and transportation, steel, pharmaceuticals and other sectors.

2) The USDP won an uncontested election in 2010, and it has since been responsible for implementing a series of reforms in Myanmar to free political prisoners, remove restrictions on the media and develop a multi-party political system. USDP leadership consists of former military officials and the party has managed the political transition while serving military interests. Its position is strengthened by its military connections, access to state funding and extensive nationwide network of party offices and staff, allowing it to provide direct financial support to constituencies and promises of tangible economic and infrastructure improvements.

3) The NLD, led by Aung San Suu Kyi, is widely expected to win the highest number of votes in the upcoming election. The NLD is strongest in the central and southern regions dominated by the ethnic Bamar majority, the support of whom propelled the party to a landslide victory in historic elections in 1990, with almost 60% of the national vote. Along with many other parties, the NLD boycotted the 2010 elections, citing widespread electoral irregularities.

The NLD established itself as Myanmar’s leading opposition party after gaining 66% of the votes, or 43 out of 44 contested seats, in the 2012 by-election, held to fill vacant seats left by members of parliament promoted to ministerial positions. The NLD has since continued to challenge the USDP and the military on many issues, including constitutional reform. The NLD’s successful inclusion in Myanmar’s political process since 2011 is also credited with the withdrawal of international sanctions in 2012 and 2013, opening up foreign direct investment (FDI) that totaled $3.5 billion in 2013-14 and a record $8 billion in the 2014-15 fiscal years.

Myanmar under an NLD-led government

An NLD-led government would signal a positive change for Myanmar’s emerging democracy, challenging the military’s political and economic interests. It would undertake efforts to amend the constitution to limit the military’s veto power, reduce its political presence in government and allow Aung San Suu Kyi to run for president as leader of the NLD. At present, Article 59 (f) of the 2008 constitution bars Suu Kyi from the presidency, as it stipulates that individuals whose spouse, children or parents are foreign citizens cannot stand as candidates. Suu Kyi’s late husband was British and her children hold British citizenship, making her ineligible to run for president despite her widespread popularity.

The speed and extent of reforms driven by the NLD will largely shape the military’s acquiescence to further political changes. The NLD will know that a dramatic promotion of reforms could provoke military action and will likely opt for gradual reforms. At the same time, the military will be conscious of the dangers political intervention in a new government poses to its own economic interests, which could benefit from broader foreign investment.

There remain other important issues that could provoke military intervention in a NLD-led government. An escalation of the ongoing civil conflict with ethnic armed groups in Kachin, Shan or Mon states, or government deals with armed groups perceived to go against the military’s interests, could prompt interference from the armed forces under the guise of national security. Similarly, concessions to ethnic political organizations in Myanmar over the establishment of a federal union, historically opposed by the military but a key demand of many armed groups, could exacerbate civilian-military tensions. In addition, the emergence of mass demonstrations against the NLD by extreme nationalist Buddhists could degrade the party’s popular mandate, prompting the military to intervene and restore order.

There are some concerns that an NLD-led government may have negative ramifications for the country’s economic outlook, increasing short-term uncertainty and operational complications for existing investors during the transition process. Radical changes to business licenses or expropriations are extremely unlikely, but companies in Myanmar may experience delays from the changing bureaucratic and administrative processes in government, including possible retrospective reviews of operating licenses. The NLD previously campaigned on a platform of extensive reforms, including improved transparency and accountability in the oil and gas sector, which accounted for $3.2 billion out of the 2014-15 total of $8 billion in foreign direct investment (FDI). A USDP-led government is less likely than an NLD victory if the current administration and the military allow free and fair elections to take place. However, due to its alignment with the military and its 25% share of appointed seats, the USDP would need less than a third of the votes to form a majority government including the military, making it a credible scenario. It could be able to form a wider coalition including ethnic parties, should it win just 15% of the vote.

A USDP-led government would offer political stability in the short-term, but hinder the longer-term opening up of the economy and political environment. The constitutional reforms considered critical for Myanmar to transition to democratic governance would be unlikely in the event of a USDP victory, which could weaken its popular mandate. Businesses would also face a lower short-term risk of unexpected regulatory changes, but this scenario could fuel unrest among NLD supporters that would erode the political stability that the USDP has been able to develop as a conduit between the military and the civilian administration.

Moreover, organizations operating in Myanmar might face reputational implications from association with USDP politicians and ministers, especially if the elections were deemed fraudulent. Despite the presence of international monitors, local media have already drawn attention to flawed voter lists and a USDP bias within the Union Election Commission, increasing the likelihood of potential fraud allegations in the aftermath of the vote. A USDP election victory would ultimately maintain the military’s vested business interests, allow it to retain its political position and slow new investment opportunities. This would serve to weaken the competitive landscape and uphold corrupt practices, which have undermined transparency in the past.

The upcoming elections may have a significant impact on community relations in Myanmar, as the result could fuel popular unrest. Radical nationalist Buddhist group Ma Ba Tha has declared support for the USDP ahead of the elections and labeled the NLD as a pro-Muslim party, amid a stronger mandate for Myanmar’s Buddhist majority offered through anti-Muslim legislation introduced under the USDP. This will increase the risk of mass rallies, anti-Muslim protests and rioting by Buddhist extremists already witnessed in Myanmar on many previous occasions, especially if an NLD government seeks to roll back the laws lobbied for by Buddhist groups. Separately, NLD supporters could stage mass demonstrations if the election is deemed fraudulent, or if the NLD achieves a close election victory over the USDP but is unable to form a majority government.

The polls on November 8 represent a watershed event for Myanmar’s emerging democracy, which will have significant ramifications for the pace and nature of political and economic reforms in the country. Free and fair multiparty elections would mark a significant achievement for Myanmar, heralding the possibility of wider changes, including a reduction of the military’s powerful position in government and the economy. However, an NLD-led government is by no means guaranteed, and both outcomes have the potential to cause short-term political instability, largely unseen since the military-backed civilian government came into power in 2011. 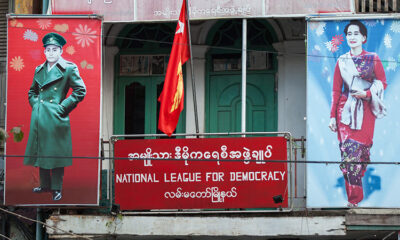